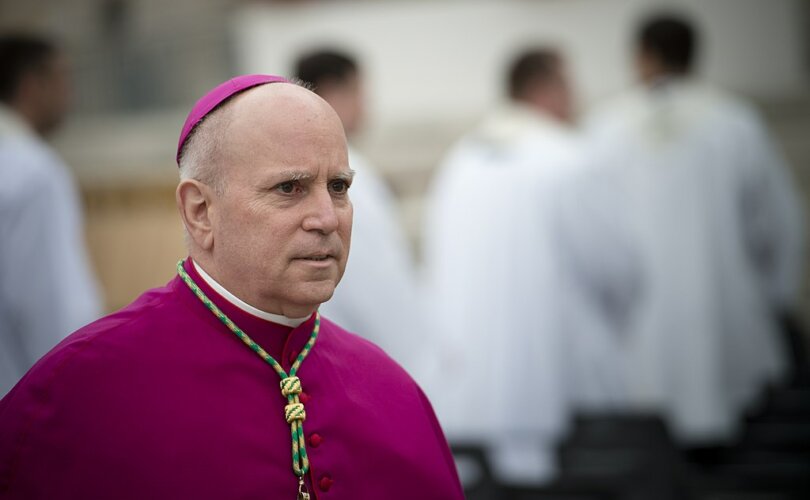 DENVER (LifeSiteNews) — The Archdiocese of Denver advised Catholic schools not to enroll or re-enroll “transgender” students, fearing that their presence may cause confusion among the student body and harm the students in question.

Its guidance document asserted that gender theory contradicts Catholic teaching on the human person. “Guidance for Issues Concerning the Human Person and Sexual Identity” was released to Catholic schools in 2019 but first appeared in the mainstream media earlier this week, thanks to the Denver Post. Sources from Catholic schools in the Denver area told the Post that the guidance was redistributed earlier this year.

The Archdiocese of Denver stipulated that while charity should be shown to students who are “transitioning” or have “transitioned,” families reliant upon advice from secular doctors or psychologists to “affirm” their child’s chosen identity present a virtually “unworkable” situation for Catholic schools. Indeed, such families and the schools are “working from irreconcilable premises and moving towards incompatible goals.” Therefore, the archdiocese maintains that enrollment or re-enrollment of such a student would not be “appropriate.”

The guidance also states that Catholic schools should not enroll transgender students because “any asserted identity that rejects the reality of biological sex is incompatible with Christian anthropology.” Rather than enrolling the student in question, the archdiocese advises that school officials should let both would-be students and their parents know of their decision, and in addition to the possibility of inviting further discussion, “express willingness to provide additional guidance and support, short of enrollment.” The archdiocese notes that “the spread of gender ideology presents a danger to the faith of Christians.”

The archdiocese also holds that its students must not use pronouns contrary to their biological sex and advises school officials to avoid promoting gender ideology; instead, they should use any possible opportunity as a “teachable moment” to instruct students on the Church’s teaching on the human person and the reality of sexual difference.

— Article continues below Petition —
Stand with Christian daycare worker fired for refusing to indoctrinate kids with LGBT agenda
Show Petition Text
7954 have signed the petition.
Let's get to 9000!
Thank you for signing this petition!
Add your signature:
Show Petition Text

The document distinguishes between students who are “transitioning” and those who are merely confused about their gender and sexual identity, stating that those who have “not taken steps to transition, nor overtly rejected his or her given sexual identity or asserted an alternative ‘identity’” are not living in contradiction to Catholic teaching, and that school officials should “discern” if such students and their parents are willing to live in conformity with Catholic teaching on this point, FOX News reported.

Students who exhibit mannerisms that are not in congruence with their biological sex but do not express gender confusion may be enrolled in Catholic schools, the archdiocese advised. If school officials discover that students exhibit gender confusion on social media or elsewhere, the guidance instructs them to disclose this to the student’s parents as soon as possible.

The guidance also touched upon issues of transgender teachers, teachers in same-sex relationships or “marriages,” and same-sex parents.

Students whose parents are in same-sex “marriages” should be protected from bullying and social isolation, the archdiocese directed, but put limitations on such couples, including asking them to refrain from public displays of affection for fear of spreading confusion among the student body. The archdiocese also advised that one parent should be listed as either mother or father, while the other partner should be listed only as an emergency contact.

The archdiocese also explains that Catholic schools cannot treat same-sex parents as if they were heterosexual parents, saying “A Catholic school cannot treat a same-sex couple as a family equivalent to the natural family without compromising its mission and Catholic identity and causing confusion about the nature of marriage for all students enrolled.”

In a statement released to 9News, the Archdiocese of Denver said that it “recognize[s] there will be people who disagree with the Church’s teachings. Christian anthropology is unalterably opposed to many aspects of the gender ideology currently affecting the culture nationally and internationally.”

“In these times of great confusion on what is true, we rely upon the natural law, a biblical understanding of the world, and Catholic teaching, because we believe the Church holds an understanding of the human person that truly leads to abundant life,” the statement continued. “The Church will not refrain from proclaiming Jesus Christ and the truth about who we are as human people and what we have been created for.”

The Denver archdiocese also defended itself from criticism, saying, “We don’t expect everyone to ascribe to a Catholic worldview, but we strongly reject attempts to paint our position as bigoted or unloving. It is precisely because of our love and reverence for the nature of the human person that we cannot stay quiet on this matter and must address what Pope Francis has said is the ‘ideological colonization’ taking place in our world today.”

Archbishop Samuel Aquila of Denver has yet to issue comment on the Archdiocese’s guidance to Catholic schools, the Daily Mail reported.

Aquila has a history of faithful leadership in the archdiocese. In May, he defended San Francisco Archbishop Salvatore Cordileone’s decision to bar Speaker of the House Nancy Pelosi from receiving Holy Communion for her support of abortion, calling the move “compassionate.” Also in May, Aquila accused the German bishops of “betraying the Gospel” in their Synodal Way, claiming that it “repudiates” the deposit of faith.

In 2019, Aquila publicly denounced a bill in the Colorado legislature that would require that curricula in Colorado schools teach gender theory.

Help Mike del Grande defeat pro-LGBT Canadian school board
This Catholic Dad is facing an uphill battle against a radically pro-LGBT school board, and he needs our help to continue the fight.