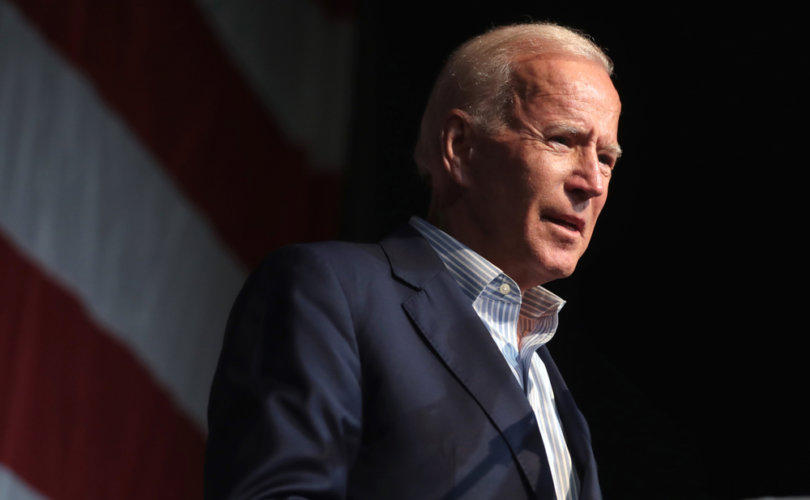 WASHINGTON, D.C., January 22, 2021 (LifeSiteNews) — President Joe Biden, who calls himself Catholic, marked the 48th anniversary of the U.S. Supreme Court’s Roe v. Wade decision that brought legal abortion to all of America with a pledge that he will make sure that “everyone” who wants it has access to the procedure of killing their preborn children.

While Biden presents himself as a practicing Catholic, his statements and actions reveal a man who does not follow what the Catholic faith teaches. The Catholic Church teaches that abortion is the murder of innocent human beings and is contrary to the fifth commandment which prohibits murder.

“Human life must be respected and protected absolutely from the moment of conception. From the first moment of his existence, a human being must be recognized as having the rights of a person — among which is the inviolable right of every innocent being to life,” states the Catechism of the Catholic Church. “Since the first century the Church has affirmed the moral evil of every procured abortion. This teaching has not changed and remains unchangeable. Direct abortion, that is to say, abortion willed either as an end or a means, is gravely contrary to the moral law.”

The U.S. Conference of Catholic Bishops (USCCB) released a statement on Biden’s inauguration day in which it warned that Biden’s pledge to pursue anti-life and anti-family policies would advance “moral evils” in the areas of “abortion, contraception, marriage, and gender.”

“So, I must point out that our new President has pledged to pursue certain policies that would advance moral evils and threaten human life and dignity, most seriously in the areas of abortion, contraception, marriage, and gender. Of deep concern is the liberty of the Church and the freedom of believers to live according to their consciences,” wrote USCCB president Archbishop José Gomez.

“Abortion is a direct attack on life that also wounds the woman and undermines the family. It is not only a private matter, it raises troubling and fundamental questions of fraternity, solidarity, and inclusion in the human community. It is also a matter of social justice. We cannot ignore the reality that abortion rates are much higher among the poor and minorities, and that the procedure is regularly used to eliminate children who would be born with disabilities,” Gomez added.

Not all U.S. Catholic leadership, however, is on board with the sentiments expressed in the USCCB statement. Cardinal Blase Cupich of Chicago rebuked the USCCB’s statement, calling it “ill-considered.”

While the Catholic Church teaches (Code of Canon Law, can. 915) that Catholics who are “obstinately persevering in manifest grave sin are not to be admitted to holy communion,” a law that many Catholic leaders such as Cardinal Raymond Burke says applies to Catholic politicians supporting abortion, some other leaders, such as Cardinal Wilton D. Gregory of Washington, D.C., have stated that they will give Holy Communion to Biden.

Robert Royal, Editor-in-Chief at The Catholic Thing, wrote today that Biden has already shown himself to be an “anti-Catholic ‘Catholic.’”

Royal sees Biden as a “self-described ‘Catholic’ president, who not only believes personally that abortion, gay ‘marriage’ (he performed one as vice-president), transgenderism (‘the civil rights issue of our time’), and much more are matters of overriding political urgency, despite the long teachings of the Church and American history. He’s determined — actually seems to be going out of his way — to impose those views. On all of us.”

“Indeed, he’s an equal opportunity religious bigot who, for all the talk of coming together, will ride roughshod over his co-religionists as well as traditional Protestants and evangelicals, Orthodox and Conservative Jews, Muslims, Mormons, and even secular citizens who believe that ‘woke’ politics do not abolish ordinary reason and human nature,” he wrote later in his piece.

“Like Nancy Pelosi, who has said that some Catholics have placed their pro-life views ‘above democracy,’ Biden has over the years talked himself into an alternative faith centered in partisan politics. A Catholic, indeed any sincere religious believer, should have no trouble saying — with the necessary qualifications — that of course he or she places God and his Word above any political order.”