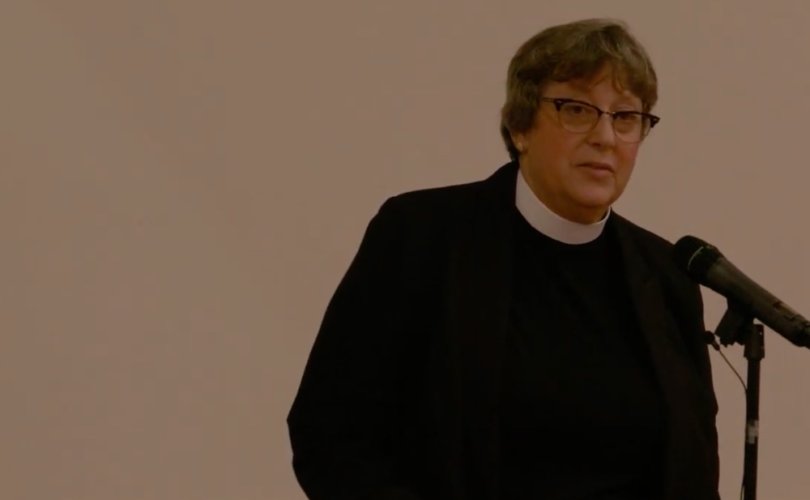 A Virginia Catholic church will host the 'ordination' of Susan B. Haynes as an Episcopalian bishop on February 1, 2020YouTube

WILLIAMSBURG, Virginia, January 16, 2020 (LifeSiteNews) – The Catholic Diocese of Richmond will permit the Episcopal Diocese of Southern Virginia to use one of its Catholic churches for the “ordination” and “consecration” of a female bishop on February 1, 2020.

Following backlash from Catholics, Richmond Bishop Barry Knestout released a January 15 letter defending his decision to allow the ceremony, citing “ecumenism” and insisting the “sacred space of the Catholic Church” will be “safeguarded.”

The Catholic Church teaches that it is ontologically impossible for a woman to be “ordained” and does not recognize any Episcopalian denomination ordinations as valid.

St. Bede Catholic Church in Williamsburg will host the event. In a January 14 Facebook post, St. Bede pastor Monsignor Joseph P. Lehman explained why the Episcopal church – which is supportive of same-sex “marriage” and the LGBT cause – was granted this permission. That Facebook post was subsequently posted as a letter from Lehman on the Diocese of Richmond’s website alongside the letter from Knestout.

Knestout expressed his “great confidence” in Lehman and told Catholics they should look at documents from Vatican II.

“I would encourage you to review the following teachings of the Church on ecumenism and norms for ecumenical activities and cooperation,” wrote Knestout. “The Decree on Ecumenism Unitatis Redintegratio from the Second Vatican Council, especially #1 and #3 speak of the importance of ecumenical dialogue and outreach. In addition, the Directory for the Application of Principles and Norms on Ecumenism #137 gives clear guidelines and recommendations regarding the possibility of sharing space with our separated brothers and sisters.”

“Finally, the Directory for the Pastoral Ministry of Bishops #207 indicates the importance of concrete acts of ecumenism on the part of the bishop.”

Knestout said allowing the invalid ordination – “a special occasion for their community” – is “an act of charity and well within the teachings of ecumenism.”

Protestant services “are intended to honor God in a manner He does not wish to be honored in,” explains My Catholic Faith, a 1949 version of the Baltimore Catechism (p. 193). “Ecumenical” activities that affirm error and do not attempt to draw people into the Catholic Church have been condemned by popes and saints throughout Church history, such as by Pope Pius XI in Mortalium Animos.

“Only those things which serve the exercise or promotion of worship, piety, or religion are permitted in a sacred place; anything not consonant with the holiness of the place is forbidden,” states Canon 1210 of the Catholic Church’s Code of Canon Law. “In an individual case, however, the ordinary can permit other uses which are not contrary to the holiness of the place.”

Msgr. Lehman said one of the reasons his parish will be used for “consecration” of the female “bishop” is because it has handicap accessible parking and a social hall.

He wrote on Facebook and in his letter published by the diocese that he hoped to “address and alleviate any concerns about the Episcopal Diocese of Virginia using our parish church for the consecration of their new Bishop [sic].”

“The [Episcopal] Diocese of Southern Virginia made contact with the former Pastor of Saint Bede (Msgr Timothy Keeney) in early December of 2018 to inquire about the use of the Church (nave and commons), Kaplan Hall (our event/receptions venue), and the other spaces here for this significant event in the life of their Diocese,” wrote Lehman. “Saint Bede is one of the largest liturgical churches of any tradition in this part of the Common-wealth, with a huge seating capacity of 1200 people, a social hall and catering kitchen, ample parking, all handicap accessible, with many auxiliary spaces for clergy and diocesan leadership to gather, dress, process, and move about freely.”

Their request came out of a long-standing formal relationship between our two Churches. The Anglican (Episcopal) Communion and the Catholic Church have been in dialogue, both nationally and internationally, since the late 1960s. In addition, in 1990, the two Virginia Catholic dioceses, the three Episcopal dioceses, and the two Lutheran Synods of the ECLA in our Commonwealth have been in a covenant. The United Methodists joined us in 2007.

For all these reasons, out of our relationship, understanding, and our friendship in the Lord, the planning committee for the Consecration approached the former Pastor of Saint Bede to use the spaces.

“In his statement, Msgr. Lehman opens by referring to the use of St. Bede’s by the Episcopal Diocese of Virginia for ‘the consecration of their new bishop.’ Already there is a serious problem because what is taking place is not a consecration, and the woman at the center of the ceremony is not, [and] will not be a ‘bishop,’” Michael Hichborn, President of the Lepanto Institute, told LifeSiteNews.

‘Ecumenism’ for pro-gay Episcopalians, none for traditional Catholics

Hichborn is planning a public rosary in reparation for the February 1 event.

“Any Catholic who would attempt to ordain or consecrate a woman would incur the penalty of excommunication, laetetia sententiae, so why is a Protestant organization attempting the same thing being permitted to conduct such a mockery inside a Catholic Church?” he asked. “Can Msgr. Lehman and Bishop Knestout not see the scandalous inconsistency in such permission?”

“This is as much of a desecration as if the bishop had permitted a Protestant same-sex ‘wedding’ to take place in a Catholic Church,” he said.

Hichborn said even the excuse from the 1993 Directory of the Application of Principles and Norms on Ecumenism given for allowing the Episcopal ceremony is insufficient:

As justification for permitting the fake consecration to take place, Msgr. Lehman quotes paragraph 137 from The Directory of the Application of Principles and Norms on Ecumenism, which states, “if priests, ministers or communities not in full communion with the Catholic church do not have a place or the liturgical objects necessary for celebrating worthily their religious ceremonies, the diocesan bishop may allow them to the use of the church …”

Without getting into the issues with the passage itself, even this paragraph fails as a proper excuse.  The condition rests on the Episcopalians not having a place for celebrating their religious ceremonies.  But the truth of the matter, there are two Episcopalian churches in the area, and if the space is insufficient for their purposes, there are convention centers they could rent.

“But given the permission in paragraph 137 of the Directory on Ecumenism, one has to wonder why no such permission or dialogue ever seems to be extended to groups like the Society of St. Pius X, whom many in the Church consider ‘separated,’” he added.

Other Catholics made the same point.

“If this is about being ecumenical, and I don't believe it is, why are the bishop and pastor allowing a female Episcopalian to say ‘mass’ at our altar, but have denied the continued requests from over 100 parishioners over the last four years for a weekly Latin Mass?” Anne Gasway, a parishioner at St. Bede, asked. “Would they allow SSPX priests to utilize the space?”

“What is our diocesan relationship with the Orthodox & the SSPX, who we are closer with than the Protestant Episcopalians?” asked one person on Msgr. Lehman’s original Facebook post. “I never hear of ecumenism or diocesan dialogue with them.”

“Don't worry everyone, this just means St. Bede will finally have a latin Mass or perhaps allow a Latin mass to be offered at the Shrine!” another commenter wrote sarcastically.

Another commenter lamented, “Parishioners begged for the Latin mass for years and were denied, but they got a Protestant ceremony they didn’t ask for.”

“I understand what you're saying, Msgr. Lehman, but it's your responsibility to discern where to draw the line,” commented a young person. “This is sacrilege and a step for the Episcopalians even further away from Truth. You are materially contributing, and even causing scandal by the voluntary association you made between the parish and the ceremony. You know this is wrong and you're looking for something to hide behind. Please don't go through with this.”

Lauren Smith, a student at the nearby College of William & Mary, told LifeSiteNews, “I think it’s terrible to remove Jesus in any context for the Protestant faith. It may seem like it’s helping your neighbor, but it can further cause divisions in the community among Catholics. Even amongst the William & Mary Catholic Campus Ministry, I fear this will create more harm than good.”

Parishioners and former parishioners of St. Bede told LifeSiteNews that various lay efforts to start a Traditional Latin Mass at the parish have been underway for years, with no success. One said former pastor Msgr. Keene made those who requested the Old Rite Mass take a six-week Latin course at $35 each, and upon its completion parishioners were disappointed to learn St. Bede would still not be offering the Latin Mass.

Over 2,140 people have signed a petition asking Knestout to “stop this event and the desecration of one of his own parishes.”

Neither a diocescan representative nor Bishop Knestout answered an inquiry from LifeSiteNews about whether the Episcopalians are paying to use St. Bede, and if so, how much.

On Friday, January 31 at 3:00 p.m., there will also be a rehearsal at St. Bede for the female cleric’s “consecration” ceremony.