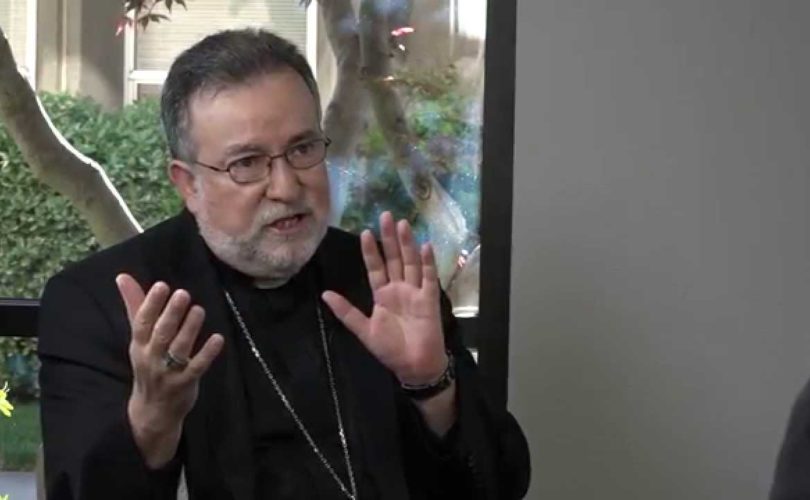 SACRAMENTO, CA, August 24, 2015 (LifeSiteNews) — The Catholic bishop of Sacramento, California, has made a strong statement on the prevalent pro-abortion double standard toward crisis pregnancy centers, at the same time recognizing the horror brought to light by the continually surfacing undercover Planned Parenthood videos.

Bishop Jaime Soto criticized the hypocrisy of those questioning the Center for Medical Progress’ ethics in exposing Planned Parenthood’s baby part harvesting through the use of concealed identities, when abortion advocates have done the same to advance their agenda, and also get a pass from the media.

Writing in an August 18 opinion piece for the Sacramento Bee, the bishop noted that the National Abortion and Reproductive Rights Action League used deception themselves when using an advocate to pose as a woman looking for help at crisis pregnancy centers to push radical pro-abortion legislation in the state.

“This undercover operation became the lame pretext for NARAL and Planned Parenthood’s attempt to push legislation – Assembly Bill 775, the so-called Reproductive FACT Act – that would fine clinics that don’t provide abortion information or referrals,” Bishop Soto wrote. “But the bill would not require Planned Parenthood or other abortion providers to provide women with information on healthy and supportive alternatives to abortion.”

In the column, titled “Crisis pregnancy centers face an underhanded assault,” he also said that this is an example of how the abortion movement operates with the media’s blessing.

“This ploy to discredit the compassionate work of those offering women and their children a hopeful alternative was unquestionably accepted by local media,” Bishop Soto said. “After all, it fit the politically correct narrative. The advocates were considered principled, clever crusaders. The staff at the centers was considered just wacky and wrong.”

Bishop Soto also expressed in the column how the full extent of Planned Parenthood’s disregard for human life has finally been laid bare because of the video controversy.

“What the Planned Parenthood videos have revealed is that crisis pregnancy centers are not the ones withholding information from vulnerable women or an unsuspecting public,” he said. “Planned Parenthood has consistently hidden the morally repulsive aspects of its mission.”

“Its problem isn’t that the medical director’s comments were taken out of context or misunderstood,” he said. “No, the problem is that staff members spoke clearly, without using euphemisms, and revealed the callous ‘throwaway culture’ in its agencies.”

Bishop Soto has defended the sanctity of human life as well in the past, taking steps back in 2012 to cease funding a nonprofit in his diocese whose leader publicly supported abortion and homosexual “marriage”.

He wrote in his current opinion piece of how the videos’ content has shattered the illusion of abortion as benign, whether for pregnant mothers, their unborn children, or industry workers.

“The videos challenge the political acquiescence given to abortion clinics, closing our eyes to the degrading, numbing nature of the work,” Bishop Soto said. “The senses of the staff, as well as women seeking help, are clouded to what is actually happening to themselves and their nascent child.”

“The videos publicly reveal a very uncomfortable truth,” he wrote.

Before concluding with how the far-reaching effects of the videos’ contents will have consequences in the California pro-life debate, the bishop spoke more about how the abortion movement no longer has cover.

“Yet, abortion proponents and providers are not at war with pro-life advocates,” Bishop Soto stated. “They are at war with themselves and the truth of their threatening procedures.”

“The fact is,” he said, “no matter how much money Planned Parenthood and others spend on expensive public relations firms, the politically correct veneer used to obscure the facts of abortion is wearing thin on our collective conscience – and that’s a good thing.”