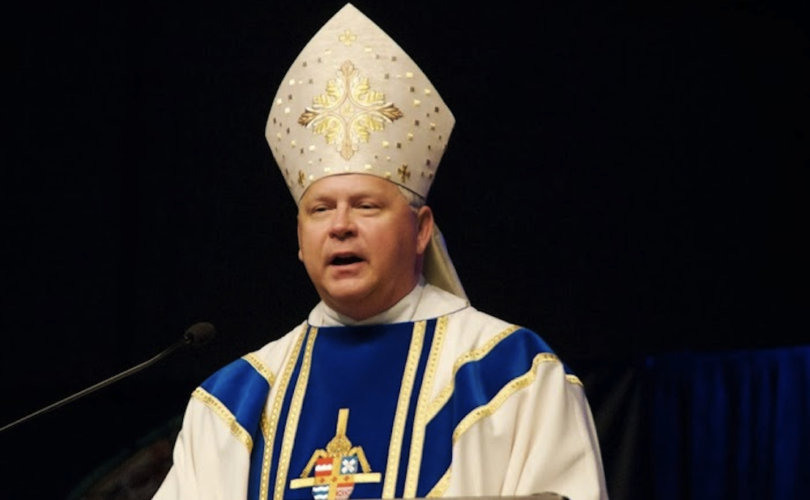 KNOXVILLE, Tennessee, March 11, 2019 (LifeSiteNews) — Catholic Bishop Richard Stika of Knoxville, Tennessee, tweeted that pro-abortion politicians should not present themselves for Holy Eucharist or otherwise lay claim to being Catholic.

On Friday, Bishop Stika tweeted to “all politicians who support the evils of abortion” and said, “Don't present yourself as a Catholic or wear signs that you are a Catholic like ash on your forehead.”

“Don't disrespect the Eucharist by receiving the Body and Blood of Christ and finally pray for forgiveness for allowing the slaughter of the most innocent.”

He added that they should not “lie and say you are personally against abortion” while otherwise approving of the practice.

“Jesus cries at that statement,” Bishop Stika wrote, adding, “It is immoral as well as a violation of human rights and it is also the ultimate child abuse.”

for allowing the slaughter of the most innocent. Please don't lie and say you are personally against abortion but can't tell another what to believe. Jesus cries at that statement. It is immoral as well as a violation of human rights and it is also the ultimate child abuse.

Bishop Stika has been forthright in his opinion that pro-abortion Catholic politicians deserve canonical sanction. In January, when the avowedly Democrat Catholic Gov. Andrew Cuomo of New York signed the most radical abortion law in the country, Bishop Stika tweeted, “Someone asked me today if I would issue an excommunication of a Catholic governor under my jurisdiction” who could sign pro-abortion legislation.

Bishop Stika wrote that he would excommunicate not only any pro-abortion governor but also any other pro-abortion politicians in his diocese. Stika tweeted, “I think I might do it for any Catholic legislator under my jurisdiction who voted for the bill as well as the governor.”

Enough is enough. Excommunication is to be not a punishment but to bring the person back into the Church. It's like medicine for them. But this vote is so hideous and vile that it warrants the act. But thankfully I am not in that positon. Very sad.