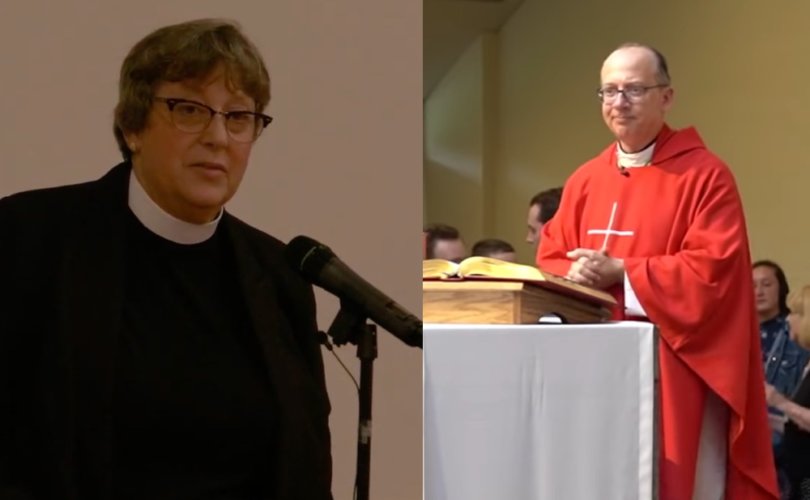 WILLIAMSBURG, Virginia, January 17, 2020 (LifeSiteNews) – The Episcopal Diocese of Southern Virginia will no longer use a Catholic parish for the “consecration” of a female “bishop” on February 1, following intense backlash from Catholics around the commonwealth.

The Diocese of Richmond had granted permission for St. Bede Catholic Church in Williamsburg to be used for the Protestant ceremony. Both St. Bede pastor Monsignor Joseph Lehman and Richmond Bishop Barry Knestout defended allowing the ceremony in a Catholic church.

The Catholic Church teaches that it is ontologically impossible for a woman to be “ordained” and does not recognize any Episcopalian denomination ordinations as valid. Catholic women who attempt to be ordained incur automatic excommunication.

“It is with great sadness that I have received a letter from Bishop-Elect (sic) Susan Haynes stating that, due to the controversy of the proposed use of St. Bede Catholic Church for her consecration as the bishop for the Episcopal Diocese of Southern Virginia, she has decided to find another location for the ceremony to take place,” Knestout announced Friday.

A press release from the Episcopal Diocese of Southern Virginia said:

The decision to change the location from St. Bede Catholic Church in Williamsburg arose out of concern and respect for the ministries and leadership of both the Catholic parish and the Catholic Diocese of Richmond. Learning that its intended use of the building was causing dismay and distress, the Episcopal Diocese withdrew from its contract with St. Bede. As Bishop-Elect Haynes observed, “in the 8th chapter of his first letter to the Corinthians, the Apostle Paul cautioned Christians to be careful about pursuing behavior that might cause problems for others within their community.”

According to the press release, Haynes wrote to Knestout, “We have so appreciated and admired your grace and courage in extending this hospitality and abiding by your invitation even under fire from those within your own flocks.”

Neither a Diocese of Richmond spokesperson nor Bishop Knestout answered a previous inquiry from LifeSiteNews about whether the Episcopalian church had paid to use St. Bede, and if so, how much.

In his statement expressing “sadness” that the Episcopal “ordination” would no longer occur inside a Catholic church, Knestout said his diocese had been “welcoming” and ecumenical.

“In granting permission for this ordination to be held at St. Bede, we were welcoming, as the Fathers of the Second Vatican Council encouraged, those who have in common with us ‘the written Word of God; the life of grace; faith, hope and charity, with the other interior gifts of the Holy Spirit’ (Decree on Ecumenism, 3),” he claimed. “We were following the example of St. John Paul II, Pope Benedict XVI and Pope Francis who enthusiastically engaged in ecumenical outreach and hospitality.”

Knestout and Lehman were not, however, following the example of many popes and saints throughout history who condemned “ecumenical” activities that affirm error and do not attempt to draw people into the Catholic Church, such as by Pope Pius XI in Mortalium Animos.

“I’m overjoyed at the news that a sacrilegious mockery of the sacrament of Holy Orders will not be taking place at St. Bede’s,” Michael Hichborn, President of the Lepanto Institute, told LifeSiteNews. He had organized a rosary protest outside the February 1 event.

More than 3,200 people signed a petition asking Knestout to stop the ceremony from occurring at St. Bede.

“That having been said, I find it perplexing that a bishop of the Catholic Church would express ‘sadness’ at the moving of the event off Catholic property while the Episcopalians explained that they did so out of respect for Catholics who were distressed by it,” Hichborn continued. “It’s as if the Episcopalians have more concern for faithful Catholics than does their own bishop.”

“Furthermore, it is incomprehensible that a Catholic bishop would refer to the event as ‘an ordination’ and the woman at the center of it as ‘bishop-elect’ if he did not believe that an actual consecration of a new bishop was truly taking place,” said Hichborn. “The truth of the matter is that, according to Catholic teaching, the conference of holy orders upon a woman is impossible, and Episcopalians do not have valid ordinations. The scheduled event was no more a ‘consecration’ than a ‘wedding’ of two members of the same sex is a ‘marriage.’”

The Episcopalian service will now take place at Williamsburg Community Chapel. It is unclear if the reception – originally scheduled to take place in St. Bede’s Kaplan Hall – following the ceremony will also be held there.

One of the reasons Lehman gave for allowing his parish to be used for this non-Catholic event was that it had handicap accessible parking and a social hall.

“Ample parking is available” at Williamsburg Community Chapel, the according to the Episcopal Diocese of Southern Virginia.

“This event stands as a clear sign of the depth of the crisis in the Catholic Church,” commented Hichborn. “When bishops can’t or won’t distinguish between actual sacraments and pageantry in Protestant sects, there can be little wonder why there is so much confusion about the Church today.”