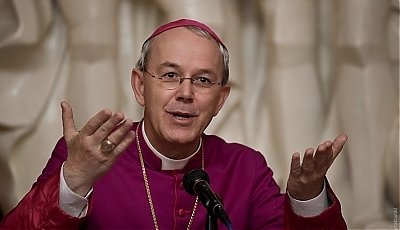 ROME, February 26, 2016 (LifeSiteNews) — Bishop Athanasius Schneider, a prelate known for his outspoken defense of the Catholic faith, is raising concern about a recent Vatican conference that focused on how to help children become “agents of change” in the fight against “man-made climate change.”

Titled “Children and Sustainable Development: A Challenge for Education,” the conference took place last November under the auspieces of the Pontifical Academy of Sciences (PAS), whose chancellor is Archbishop Marcelo Sánchez Sorondo.

Among the most controversial presenters was UN advisor Jeffrey Sachs, who has called for the birth rate in Africa to be drastically reduced through government programs aimed at increased use of contraception, and who has championed abortion as a way to reduce fertility. The Vatican also partnered with Sachs last April, asking him to moderate and co-host a conference on climate change.

Bishop Schneider, who is auxiliary bishop of Astana, Kazakhstan, said that faithful Catholics should be shocked that “enemies of the Catholic Faith” are involved in such a conference.

“One can realize here with shock the extent to which the declared enemies of the Catholic Faith are given scope for their activities at such an event in the Vatican. One has to protest against it. With the help of these speakers whose publications clearly oppose the Faith, the Faith itself and the natural moral law are being mocked in a subtle way.”

“God does not allow His Being mocked. At some point, He will intervene and one has to have compassion with those persons who are responsible for such a conference because they will one day answer for this before the Judgment Seat of God.”

“People who at such a conference sell the Holy Faith so cheaply – also when they are priests or bishops – should not forget this warning of Holy Scripture: ‘It is terrible to fall into the hands of the Living God’ (Hebrews 10:31). We have to wish it for those so-called Catholics, priests and bishops, and say: ‘Convert from your hearts to Our Lord, as long as there is time left!’” he said.

The event’s honorary President was Mrs. Courtney Sale Ross, founder of the Ross School in East Hampton, New York, and widow of Steve Ross, the owner of Hollywood's Warner Brothers Studios and also the founder of the promiscuity-laden music channel MTV. A number of Ross School students made presentations at the conference, in particular on climate change.

One Ross student made the case that world leaders should tap into students from private upperclass schools and “use them as agents of change” because they’ve had a “better” life and education.

“[They should] ask them to use what they’ve had in their life to make other people’s lives better,” the student said.

The conference’s final declaration notes the importance of turning young people into “agents of change” regarding the fight against climate change.

“Children and teenagers are not just recipients of knowledge: they must be inspired to act in their local contexts, and design sustainability initiatives in their schools and communities,” the document states.

Turning the traditional order upside down, where adults are the formative teachers of the young, the document continues: “Youth can encourage change through constructive interaction not only with other young people, but by positively influencing adults. Social media and social networks can be an asset. The education and empowerment of girls is essential to serve as agents of change.”

A connection is purportedly established in the document’s conclusion between environmental issues and moral and social issues. Educators are urged to stress to students “connections and mental habits that are open and flexible, fostering new thinking models that erode a tendency toward fixed beliefs.”

When LifeSiteNews reached out to the Director of the Holy See Press Office, Father Federico Lombardi, to ask about Pope Francis' own position on the use of children as “agents of change,” no response was given. Archbishop Sànchez Sorondo also did not respond to LifeSiteNews' request for comment.

Vatican bishop: Pope’s view on global warming is as authoritative as the condemnation of abortion

Laudato Si’ ignores real gains for the environment and the poor

Why the Catholic Church should be opposing the Paris climate agreement

Are the UN’s sustainable development goals about eliminating poverty – or children?