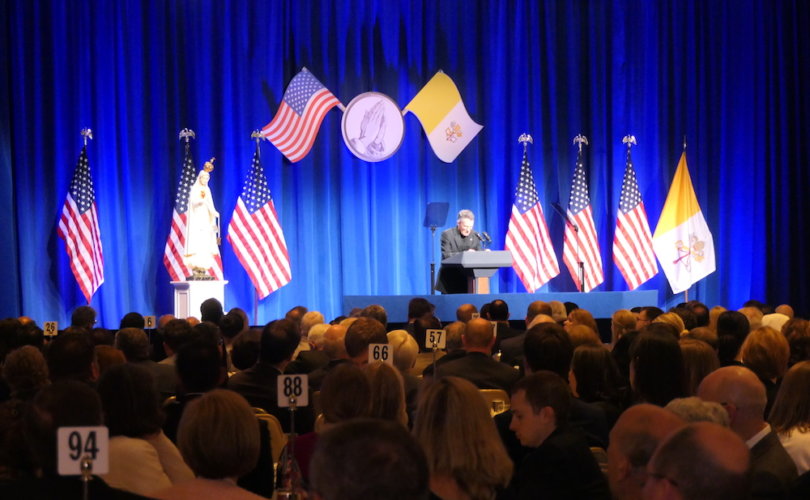 “The United States was not established because of a common ethnic or racial origin, or a common language, or those other elements that characterize many nations of the world,” Broglio said at the National Catholic Prayer Breakfast on Tuesday morning. “It is based on certain, self-evident truths: life, liberty, and the pursuit of happiness. Our virtue will give us strength and wisdom if we are open to it.”

“To quote Cardinal Hickey in his first address to the Red Mass here in Washington, D.C. in 1980: 'Laws are not necessarily embodiment of a moral code. Indeed, it is possible that some laws undermine, rather than enrich, the human family. Members of a pluralistic society [must] … face the challenging fact that what is clearly legal is not automatically clearly moral. If we need evidence of this, we only need to think of laws that have supported slavery, the subordination of women, disenfranchising of Native Americans, the suppression of innocent life in the womb or in situations of terminal illness, and various forms of ethnic, racial, and religious prejudice. Even when such policies were or are legal, they were still immoral.'”

Broglio emphasized the importance of the virtues, especially prudence.

The archbishop suggested perhaps the media and people with access to “the immense quantities of data … available to us” should embrace prudence.

“Never before has so much been offered with so little guidance as to what is true and what is false,” he said.

Vice President Mike Pence told the crowd later in the morning that President Trump personally asked him to speak at the March for Life in January because Trump was unable to call to offer his support. Pence promised: “American Catholics have an ally in President Donald Trump.”

The National Catholic Prayer Breakfast played a video message from pro-life actress Patricia Heaton. She was promoting a new animated film called The Star, which tells the Christmas story from the perspective of animals who were present. Breakfast attendees were shown a preview of the film in storyboard format.

The Star is scheduled to come out in November 2017. Kelly Clarkson, Tyler Perry, Oprah Winfrey, Tracy Morgan, and Christopher Plummer voice characters in the film alongside Heaton.

Mother Olga of the Sacred Heart, a Catholic religious sister who was born in Iraq and lived through four wars there, spoke as well. She praised the annual March for Life, as did Pence.

Bishop Mario Dorsonville, Auxiliary Bishop of the Archdiocese of Washington, prayed the opening prayer. Father Arne Panula, the former director of the Catholic Information Center, prayed at the event's end.