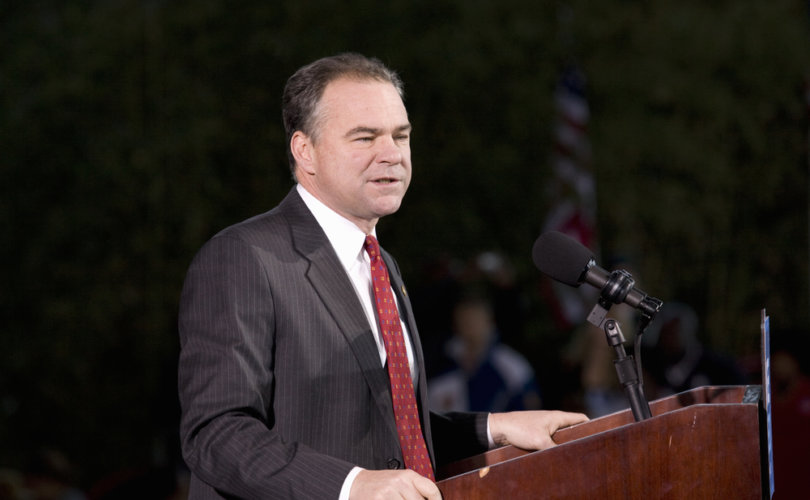 “Democratic VP choice, Tim Kaine, has been widely identified as a Roman Catholic,” Bishop Thomas J. Tobin of Providence, Rhode Island wrote on Facebook. “It is also reported that he publicly supports ‘freedom of choice’ for abortion, same-sex marriage, gay adoptions, and the ordination of women as priests. All of these positions are clearly contrary to well-established Catholic teachings; all of them have been opposed by Pope Francis as well.”

“Senator Kaine has said, ‘My faith is central to everything I do,’” Tobin continued. “But apparently, and unfortunately, his faith isn’t central to his public, political life.”

Kaine has described himself as a “traditional” Catholic who believes the Church’s teaching that abortion is morally wrong, but one who believes “the right rule for government is to let women make their own decisions.”

“We don’t need to make people’s reproductive decisions for them,” he has said.

The Catechism of the Catholic Church is clear, however, that abortion is a form of murder. It states: “Human life must be respected and protected absolutely from the moment of conception. From the first moment of his existence, a human being must be recognized as having the rights of a person – among which is the inviolable right of every innocent being to life.”

Kaine has emphasized his support for Roe v. Wade and is a co-sponsor of a bill that would dismantle pro-life laws across the country.  He has a perfect pro-abortion voting record in the Senate.