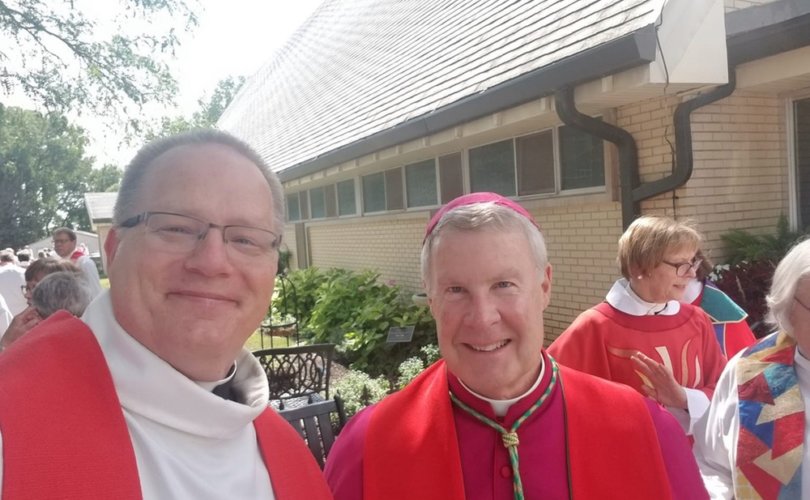 August 30, 2019 (LifeSiteNews) – Sioux City, Iowa, Bishop R. Walker Nickless appeared at the installation ceremony of a female “bishop” in the Evangelical Lutheran Church in America (ELCA) earlier this month, posting on social media that he was happy about attending, and upsetting some Catholics.

“I attended the installation of Bishop Lorna Halaas as Bishop of the Western Iowa Synod, Evangelical Lutheran Church in America,” Bishop Nickless said on his Facebook page.

He went on to say, “I was happy to represent the Catholics of the Sioux City Diocese at the ceremony and promised her our prayers.”

The ceremony took place on Saturday, August 17, and according to the Sioux City Journal, Halaas is the first female “bishop” for the Western Iowa Synod of the ELCA – overseeing 125 congregations.

In 2019 of the ELCA’s 65 synods eight elected female “bishops,” making 23 of the 65 synods headed by women. A female, Elizabeth Eaton, was reelected presiding “bishop” of the ELCA earlier this month, a position she has held since 2013. Eaton presided over Halaas’ installation.

The Catholic Church teaches that women cannot be ordained priests or bishops, as Christ chose a male priesthood. And although the Church recognizes the baptisms of some Protestant faiths, the Church would consider neither a female’s “ordination” to the priesthood nor the consecration or installation of a female “bishop” valid.

While Catholic bishops would be expected in their role to appear alongside faith leaders of other denominations and faith traditions at varied civic events – and some ecumenical appearances might be considered prudent – a Catholic bishop attending what Church teaching would deem an invalid ceremony, and subsequently posting about it on social media, raises the issue of scandal and confusion among the faithful.

Nickless’ attendance at the event and subsequent social media post left some Catholics in the diocese dispirited and angered, Church Militant (CM) reports, as his actions appear to put Protestantism on the par with Catholicism.

Articles of the Lutheran faith include support for contraception, the CM report said, along with rejection of the authority of the Catholic Church, transubstantiation, the doctrine of Purgatory, and Catholic teaching on all seven sacraments.

A private note in lieu of a public appearance and accompanying affirmation would have been the better route, the CM piece said.

Nickless told LifeSiteNews his attendance was an opportunity for ecumenism.

“Ecumenism is still a priority of the Catholic Church’s outreach to non-Catholic Christians,” he said. “As a bishop, my attendance at this event was both an obligation of the public aspect of my office, and an opportunity to build a personal relationship with leaders of other denominations in my diocese. One cannot expect people to be willing to listen to one’s views, no matter how true, if one is not able to demonstrate one’s own willingness to listen.”

Nickless was in news reports in February after the Sioux City diocese published the names of 28 priests it said are credibly accused of sexually abusing minors between 1948 and 1995.

Bishop of Sioux City since 2006, Nickless is among the bishops to support investigation into former U.S. apostolic nuncio Archbishop Carlo Maria Vigano’s claims that knowledge of former Cardinal Theodore McCarrick’s sexual misconduct and predation extended to the Church’s top level and denotes a homosexual power network.

Nickless was also among the bishops critical of the University of Notre Dame’s invitation to President Barack Obama to speak and receive an honorary law degree at its May 2009 commencement ceremony. He was critical as well of the abortion-subsidizing Obamacare legislation.

He has also written critically of the so-called “spirit of Vatican II,” or a misinterpretation of the Second Vatican Council to move the Church away from its tradition and teaching.

“We must stop speaking of the ‘Pre-Vatican II’ and ‘Post Vatican II’ Church,” Nickless wrote, also agreeing with Pope Benedict XVI that the Council's meaning “must be found only in the letter of the documents themselves.”

“The so-called ‘spirit’ of the Council has no authoritative interpretation,” he said. “It is a ghost or demon that must be exorcised if we are to proceed with the Lord's work.”