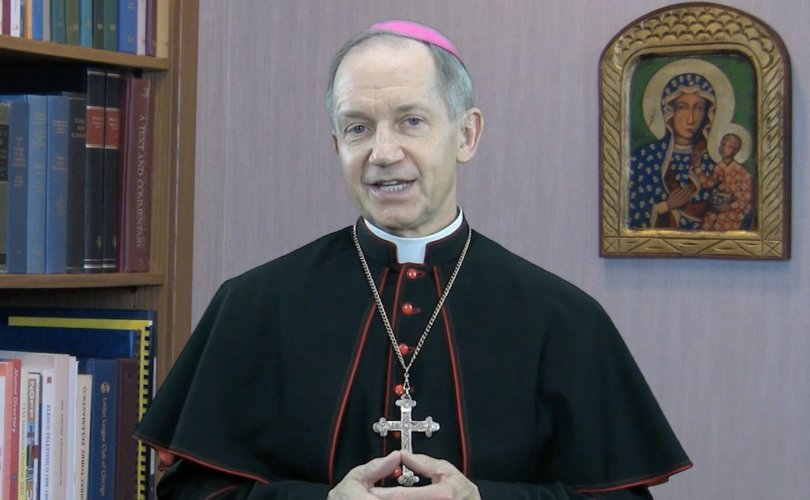 SPRINGFIELD, Illinois, May 31, 2016 (LifeSiteNews)—A Catholic bishop in Illinois condemned gender ideology and asked that in diocesan facilities, people use bathrooms that correspond with their biological sex.

In a video message to the faithful, Springfield, Illinois Bishop Thomas John Paprocki, a well-known defender of Catholic orthodoxy, said transgender activists have turned “common sense…on its head in our culture” by insisting that subjective feelings about gender be given preference over biological reality.

Paprocki listed recent national and local instances of the clash between transgenderism and bathroom privacy.  He cited examples from around Illinois of schools granting students access to restrooms and intimate facilities designated for the opposite sex and the Obama administration’s Department of Justice warning North Carolina that its new law preventing men from accessing women’s bathrooms and vice versa violates civil rights law and could result in a loss of billions federal dollars.

Paprocki is no stranger to the clash between faith and LGBT activism.  In 2002, his former secretary was murdered by a gay activist after she urged him to change his gay lifestyle.  Paprocki said “she died as a martyr for her faith.”

In 2013, with “great reluctance,” Paprocki held a rare public exorcism as the governor of Illinois signed a law redefining marriage to include same-sex couples.  He said he didn’t want the spotlight in which the public exorcism put him, but he felt God was asking him to speak out and offer prayers against same-sex “marriage,” which he said is a tool of the devil.  During the state’s fight over same-sex “marriage,” Paprocki stopped a group of homosexual activists from praying a “blasphemous” pro-gay rosary inside a Catholic cathedral.

Paprocki has also enforced Canon 915 prohibiting individuals who have committed “manifest grave sin” without repenting  from receiving Holy Communion.  He publicly corrected Chicago Archbishop Blase Cupich after the prelate contradicted Church teaching by insisting that those in a state of serious sin may receive Holy Communion and stood by the decision of a priest in his diocese to refuse to give Holy Communion to a pro-abortion senator.

“The transgender activists would have you believe that their politically correct ideology is based on science,” said Paprocki.  “However, the American College of Pediatricians has pointed out that transgenderism is classified as a mental illness and therefore has warned legislators and educators that conditioning children to accept transgenderism as normal is child abuse. They advised, ‘When an otherwise healthy biological boy believes he is a girl, or an otherwise healthy biological girl believes she is a boy, an objective psychological problem exists that lies in the mind, not the body, and it should be treated as such.’”

Paprocki pointed to the experience of Dr. Paul McHugh, the psychiatrist-in-chief at Johns Hopkins Hospital, who ceased the hospital’s practice of sex-reassignment surgery.  McHugh says that the practice “brought no important benefits” and has condemned the widespread phenomenon of doctors and therapists encouraging children to embrace the notion that they can change genders by mutilating their bodies.

“The Catholic Church has some clear teachings on transgender issues,” Paprocki continued.  “Catholics are called to treat everyone with compassion. Yet the church maintains that people may not change what Pope Benedict XVI called ‘their very essence.’ In a speech at the Vatican on Dec. 23, 2008, Benedict directly addressed transgender issues by cautioning Catholics about ‘destroying the very essence of the human creature through manipulating their God-given gender to suit their sexual choices.’”

Paprocki also cited Pope Francis’s encyclical on the environment Laudato Si’, in which he wrote that men and women should acknowledge their bodies as a gift from God and not manipulate them, and his recent exhortation Amoris Laetitia, in which he condemned gender ideology as an “attempt to sunder what are inseparable aspects of reality.”

Paprocki asked that people respect the teachings of the Catholic Church in their use of facilities in the Diocese of Springfield’s schools and churches.

“People who are confused about their gender identity — especially children and adolescents — should be treated with compassion and provided counseling rather than being further confused by activists promoting their political ideology,” Paprocki concluded.

The Diocese of Springfield already has policies in place in its schools that ensure children will be taught the fullness of the Catholic faith regardless of their parents’ lifestyles.