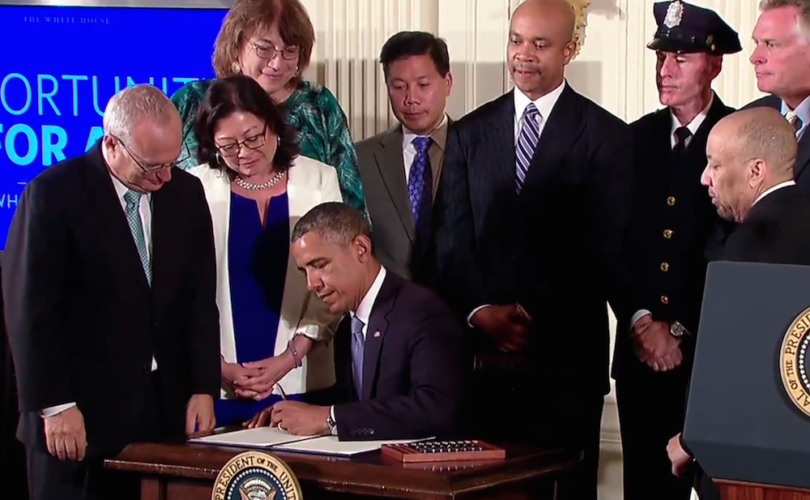 America’s Catholic bishops have strongly criticized President Obama after he signed an an executive order Monday banning federal contractors from excluding people from employment based on sexual orientation or gender identity.

“Today’s executive order is unprecedented and extreme and should be opposed,” Archbishop William E. Lori of Baltimore and Bishop Richard J. Malone of Buffalo said in a statement Monday. “In the name of forbidding discrimination, this order implements discrimination.”

The executive order, which has been expected for weeks since it became clear that the House would not take up the Senate-passed Employment Non-Discrimination Act (ENDA) this summer, does not include a religious exemption that a number of prominent Obama backers supported. That exemption would have allowed religiously-affiliated organizations to be exempt from the ban on considering sexual orientation and gender identity in hiring, which is consistent with ENDA.

The order, however, does maintain a 2002 exemption instituted by President George W. Bush that allows religiously-affiliated contractors to consider a person’s faith tradition in their hiring decisions.

According to Lori and Malone, “With the stroke of a pen, [the order] lends the economic power of the federal government to a deeply flawed understanding of human sexuality, to which faithful Catholics and many other people of faith will not assent. As a result, the order will exclude federal contractors precisely on the basis of their religious beliefs.”

The bishops also said the order “is predicated on the false idea that 'gender' is nothing more than a social construct or psychological reality that can be chosen at variance from one’s biological sex.”

Dr. Barrett Duke, who serves as the vice president of public policy and research for the Ethics & Religious Liberty Commission of the Southern Baptist Convention, told LifeSiteNews that Obama's executive order shows a preference for “ideology over public service.”

“Typically, the Courts have not favored viewpoint discrimination, so here you're in a situation where the Obama administration has decided it will discriminate against a particular viewpoint it chooses to disfavor, rather than facilitate the service that the taxpayer dollars are actually there to provide,” he said.

“Essentially they are prioritizing ideology over public service, because they are deciding, all of a sudden, who is worthy to provide a non-religious service. To our understanding, that's not within their purview to do,” Duke added.

In a letter sent to Obama on July 1, several prominent Obama supporters asked him to include a complete religious exemption. Signatories included a former Obama employee at the White House and on the campaign trail. The letter asked “that an extension of protection for one group not come at the expense of faith communities whose religious identity and beliefs motivate them to serve those in need.”

The letter also noted that in his first presidential campaign, Obama said, “I believe that marriage is the union between a man and a woman. Now, for me as a Christian, it is also a sacred union. God's in the mix. … I am not somebody who promotes same-sex marriage.”

In a public statement, the Family Research Council's Peter Sprigg said that “President Obama has ordered employers to put aside their principles, and practices in the name of political correctness. This level of coercion is nothing less than viewpoint blackmail that bullies into silence every contractor and subcontractor who has moral objections to homosexual behavior.”

The Catholic League's Bill Donohue was similarly critical. He said that Obama was hypocritical in his application of exemptions to federal laws. “Obama … has no aversion to exemptions—over 100 million are exempt from his signature ObamaCare legislation,” said Donohue. Yet Obama “cannot bring himself to exempt religious institutions whenever the issue touches on homosexuality. Which is why the bishops oppose ENDA.”

“Earlier versions of [ENDA] said that 'This Act shall not apply to a religious organization,' but in 2007 this exemption was made conditional.”

According to Duke, “When people are unable to think that religion actually serves as a primary motivating factor for people's actions, they have difficulty understanding that people are unable to subordinate their beliefs for acts of service.” He says his organization “[doesn't] believe that people of good faith can, in good conscience, subordinate the animating feature of their service to provide their service.”

Many commentators supported the executive order, which mostly changed two non-discrimination executive orders from the 1960s that prevented discrimination on the basis of sex, race, disability, and other traits. Jonathan Capehart of The Washington Post wrote that “gay Americans should not fear or be subjected to bias simply because of who they are.”

“By contrast, 'race' and 'sex' clearly refer to traits, and in the overwhelming majority of cases, these traits (unlike voluntary behaviors) do not affect fitness for any job.”

“Today's executive order also does not contain a Bona Fide Occupational Qualification (BFOQ) exemption,” he noted. A BFOQ, Anderson says, is one that allows sex discrimination where it is reasonable, such as “hiring a female camp counselor at an all-girls sleep-away summer camp, for example, which might otherwise seem to be 'sex discrimination.'”

Both Anderson and Capehart noted that the vast majority of America's major federal contractors and Fortune 500 companies already have anti-discrimination laws in place.