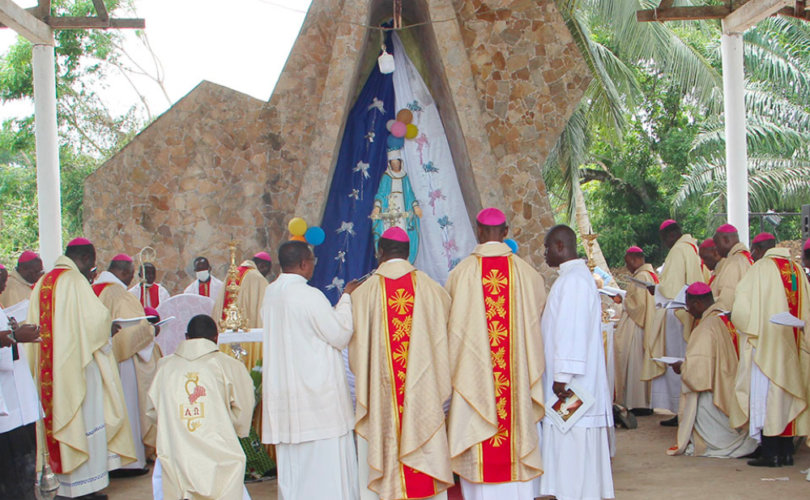 MARIENBERG, Cameroon (LifeSiteNews) – In the wake of bloody conflicts that have been ongoing for years in Cameroon, the African nation’s Catholic bishops re-consecrated the country to the Immaculate Heart of Mary in the presence of thousands of Catholics.

As the culmination of a weekend pilgrimage, the assembled bishops of the National Episcopal Conference of Cameroon (NECC) re-consecrated the country to the Immaculate Heart on April 24 at the shrine in Marienberg in the Diocese of Edea. The country was first consecrated to Our Lady by the Pallottine Missionaries on December 8, 1890.

Speaking to journalists before the national pilgrimage, Bishop Abraham Boualo Kome of the Bafang diocese, the president of the NECC, said:

“The National Pilgrimage and Prayer for Peace to take place in Marienberg is an expression of solidarity of all our brothers and sisters towards the people of the troubled regions of our country that suffer in a visible way.”

The aim of the pilgrimage, as highlighted by Archbishop Nkea Fuanya, was to “implore the intercession of the Blessed Virgin Mary for reconciliation and peace in Cameroon.”

A brief report of the pilgrimage from the NECC mentioned that there were “tens of thousands” of pilgrims who joined the bishops over the weekend. U.S. Conference of Catholic Bishops-run Catholic News Service reported that over 1,200 Catholics were gathered at the shrine.

“The presence of all these Christians testifies to the importance that Mary occupies in their life of faith, but also to the thirst for peace that inhabits the Cameroonian people,” Bishop Kome said. “We should therefore ask God for this peace, but also do everything necessary at our level to maintain it, because peace is a grace, but also a personal effort. And this undoubtedly involves acquiring a quality of God which must also become ours: mercy.”

Pope Francis mentioned the bishops of Cameroon in his April 24 Angelus, asking for Catholics to join in prayer so that “through the intercession of the Virgin Mary, may soon grant true and lasting peace to this beloved country.

“The Bishops and faithful of Cameroon today make a pilgrimage to the Marian Shrine of Marienberg to reconsecrate the nation to the Mother of God. They pray for peace in their country, which for 5 years has been wounded by violence. May God grant true peace soon.” –Pope Francis pic.twitter.com/slUKeOm4Mq

Cameroon is beset by a number of bloody and long-lasting conflicts. One chief cause of bloodshed involves the English-speaking minority population, as a war of six years has now killed an estimated 6,000 people, according to Crisis Group. A further 765,000 people have been displaced by the conflict.

In August 2021, Father Richard Njoroge, a Mill Hill Missionary based in Anglophone, Cameroon, spoke about the conflict, revealing that “a huge population is living in the bush with no shelter – children and women all just lying in the open.”

“We go to the bush and gather the Christians together and celebrate the Eucharist there. The Church will go to where the people are,” he added.

“The only thing people hold on [to] at this time is their faith because it seems everything else has fallen by. Even though there’s a higher sense of insecurity, the churches are still full on Sunday and people will defy all odds to go and pray because they feel their faith still gives them hope.”

Catholics are being particularly targeted by the Moslem terrorists, as Aid to the Church in Need have reported. “Not a day passes without attacks on the villages on Cameroon’s frontier with Nigeria,” Bishop Bruno Ateba of Maroua-Mokolo, northern Cameroon, told the Catholic charity in 2020.