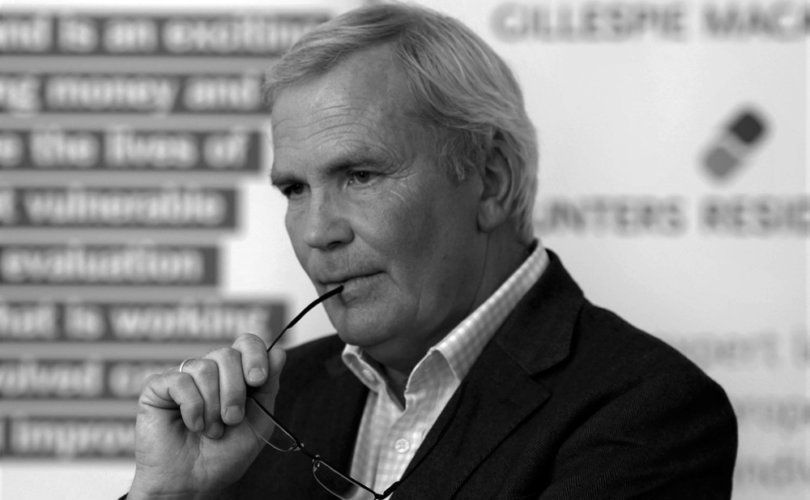 EDINBURGH, Scotland, April 30, 2019 (LifeSiteNews) – A Catholic businessman was suspended from a prestigious business association and has lost a long-term contract because he tweeted links to LifeSiteNews reports.

Michael Willis, a resident of Scotland who provides CEO and director mentoring, was suspended from membership of the UK’s Institute of Directors (IoD) after a newspaper revealed last May that Willis had shared two articles on Twitter about Islamic migration and the low European birth rate. Willis was the director of board development for IoD, with which he had worked for more than 17 years.

Willis confirmed that the articles he retweeted were by LifeSiteNews: “Muslim takeover of Europe is ‘biggest story of our time’ and nobody knows it” (August 11, 2017) and “Europe’s childless leaders symbolize a dying continent soon to be overrun by Muslims” (August 16, 2017). Both articles are news stories relating the opinions of journalist Mark Steyn. One of the articles contains a quote by entrepreneur Elon Musk.

The newspaper, called The National, has a circulation of only 9,101. It is linked to the ruling Scottish National Party (SNP), headed by First Minister Nicola Sturgeon. In LifeSiteNews’ August 16 article, Sturgeon is listed among the many western European leaders who have never had a child.

“The National is the linchpin, the mouthpiece of the SNP,” Willis told LifeSiteNews. “You get destroyed if you criticize Nicola.”

Written by Andrew Learmonth, the May 3 article “Institute of Directors caught up in Islamophobia Row” claims that Willis is “close” to Jim Dowson, a founder of the anti-multicultural “Britain First” party. Learmonth wrote that Willis had linked to “a far-right website,” meaning LifeSiteNews.

John-Henry Westen, editor-in-chief of LifeSiteNews, took strong exception to the notion that the media organization is a “far-right website.”

“To suggest we are a far-right website is laughable,” Westen said and revealed that, as a person of color, he had to cope with discrimination as he was growing up.

“We are pro-life and Christian. So of course we lament the decline of Christianity in Europe and the lack of openness to life among Christians,” he added.

“Only anti-Christian bigots would try to label us 'right wing' for standing up for unborn children, the family, and the faith that brought civilization to Europe.”

Willis told LifeSiteNews that Learmonth had exaggerated his relationship to Dowson, whom he met in the 1990s when both men were involved in pro-life activism in Scotland. Willis said he has communicated with Dowson on Facebook but hasn’t seen him in years. Meanwhile, he believes he had only 15 Twitter followers when he shared the LifeSiteNews articles, two of the only three tweets he had ever retweeted.

“They did a hatchet job on me,” the businessman said of The National.

Learmonth reported that “after being alerted to Willis’ tweets” the Institute of Directors “distanced themselves from the Stirling-based businessman, saying that despite him being head of board of development, he was not staff.”

The Institute went into panic mode and, instead of defending its member against the partisan newspaper, tried to be rid of him. According to redacted emails shared with LifeSiteNews, an official at the Institute of Directors declared that Willis could no longer work for the organization.

“We need to take immediate action,” the official wrote May 3. “This man can no longer ever again do any work for us, and frankly we should revoke his membership.”

The official asked for a list of work that Willis had done for the organization, saying it would be “great if (redacted) could put together a summary of exactly what work this horrendous man has done for us and since when.”

The IoD official voiced a hope that the Scottish story would not “go national.”

The Institute of Directors then contacted Michael Willis. David Watt of the Scottish branch told Willis on May 8 that he could not take part in planned meetings with a client.

“We are not in a position to let these meetings go ahead with you involved,” Watt wrote by email and asked for details of work that Willis had already done, including invoices, so he and a colleague could continue the work Willis had started.

Willis told LifeSiteNews that he received £20,000 in fees annually from his work with the Institute of Directors and he had last signed a contract with them in November 2017.

On May 9, 2018, Willis received an email from Junior Bammeke, then the IoD’s company secretary, saying he had caused IoD staff “distress” with his tweets and been suspended from membership.

Willis responded by letter to say “the majority of Europeans” agreed that “uncontrolled Islamic migration into Europe” was a threat and that he was free “in this country” to express “demographic facts.” He went on to share with Bammeke that he was a Catholic pro-life campaigner.

“Does this activity cause distress or embarrassment to other Institute members?” he asked. “Quite possibly, but this does not trump my right to freedom of speech and to defend the right to life.”

Willis added that Catholics do not accept same-sex marriage.

“I am intimately involved with the situation in the Middle East and the root causes of mass migration into Europe.”

Bammeke later wrote to Willis that the articles he had shared over Twitter “could reasonably be considered as being of a racist and offensive nature.”

“Since when has quoting accurate statistics about Islam been considered racist?” Wallis retorted. “Islam is not a race; it is an ideology and a religion.”

“I really have to question whether you have actually read the two articles as there is nothing of an offensive or racist nature which you have highlighted in your evidence,” he continued.

“Just the claims that members of your staff have been caused distress (whose testimony) you don’t go on to clarify or quote.”

Willis then blasted the IoD for serving an ideology instead of its members.

“My contracts with the IoD have been summarily cancelled, with no compensation, on the back of an article smearing me as a racist and guilty by association with an individual and two tweets,” he wrote.

“Your actions smell of McCarthyism, and you are going down a dangerous and unprofessional road which besmirches the standards of an organisation which is supposed to serve its members rather than promote an ideology.”

Willis, born in Egypt, told LifeSiteNews that he has worked with Catholic charities to provide aid to Christians and Muslims in the Middle East.

“I love the Middle East,” he said. “I love the people. I love their way of life.”

He told IoD that when communicating his thoughts on Islam and its danger to Catholics, he was not speaking from “ignorance or bigotry.”

“I am intimately involved with the situation in the Middle East and the root causes of mass migration into Europe,” he wrote May 13.

WIllis, who is being represented by Robert Smith of the UK’s Christian Legal Centre, is seeking damages from the Institute of Directors for breach of contract, discrimination and tarnishing his reputation.

The businessman told LifeSiteNews that his health had been adversely affected by the falling out with IoD, and also that he had missed out on business opportunities.

“Suddenly, nobody calls me anymore,” he said.

Watt, executive director of the Institute of Directors Scotland, told LifeSiteNews that Willis had worked for them “for a number of years.”

Donjeta Miftari, the Institute of Directors’ media relationships manager, told Life SiteNews that Willis was “suspended as part of an investigation into possible breaches of our member Code of Conduct.”

“The investigation process is ongoing, so we cannot comment further at this stage,” she added.

Both Bammeke and Stephen Martin, the IoD’s general director when Willis was suspended from membership, have stepped down from their positions with the organization.

LifeSiteNews reached out to Learmonth for comment, and although he initially responded, he did not provide a comment by deadline.