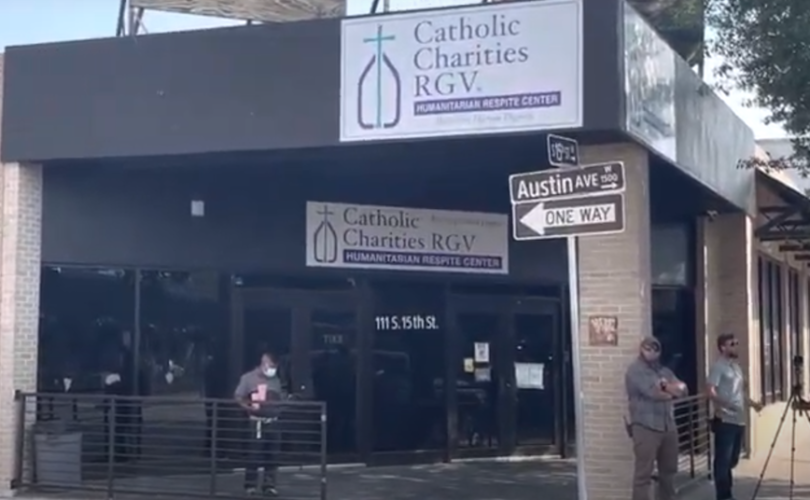 MCALLEN, Texas (LifeSiteNews) – Catholic Charities and a South Texas diocese are facing growing scrutiny over their roles in transferring illegal migrants across the U.S. in partnership with the Biden administration.

The Diocese of Brownsville and the diocese’s Catholic Charities branch are subjects of a new lawsuit by watchdog groups, filed days before a GOP congressman threatened to subpoena Catholic Charities USA for details about the organization’s activities at the border.

CatholicVote Civic Action, a conservative Catholic watchdog, partnered with Judicial Watch to sue the Biden administration this month for all records of communications between the U.S. Customs and Border Patrol (CBP) and the Department of Health and Human Services (HHS) and the Brownsville diocese.

HHS and the Department of Homeland Security (DHS) had failed to respond to Freedom of Information Act (FOIA) requests from CatholicVote by September, the group said. The FOIA requests seek communications between Border Patrol and the Diocese of Brownsville, CCRGV, the Humanitarian Respite Center, and the U.S. Conference of Catholic Bishops (USCCB).

“The Biden administration has refused to provide copies of communications between Catholic-affiliated charities and organizations at the border. Their lack of transparency and obstruction forced us to file these federal lawsuits,” CatholicVote president Brian Burch said in a statement. “American Catholics deserve to know the full extent of the U.S. government’s role in funding and coordinating with Catholic Church affiliated agencies at the border, and what role these agencies played in the record surge of illegal immigrants over the past year.”

The CatholicVote suit follows reports that CCRGV has worked with the Biden administration to transport migrants from the U.S.-Mexico border across the country.

In an February 3 interview, Sister Pimentel acknowledged that CCRGV pays for bus and plane tickets for “very few” undocumented migrants to travel into the U.S. interior, Judicial Watch noted. Pimentel added that her group is partially reimbursed by the federal government and recently requested around $1 million in taxpayer funds through a federal humanitarian grant.

CCRGV’s Humanitarian Respite Center, established in 2014, is often the first stop to which the Border Patrol brings immigrant families who illegally cross the border, according to dissident Catholic publication The Tablet. The center has encountered around 1,000 migrants per day in recent months, giving them free resources and seeing them off “onto their journey,” CCRGV’s website states.

The charity initially came under fire last summer, after the police department of La Joya, Texas announced that Border Patrol had released dozens of COVID-positive illegal aliens to the group, which then rented out a hotel to host the migrants, CBS 11 News reported.

One migrant family with COVID-19 under CCRGV’s care was later found coughing and sneezing without face masks at a local restaurant, La Joya police said in a July public health announcement. Most COVID-positive migrants placed with CCRGV moved freely about La Joya without masks, according to the department.

CCRGV isn’t the only Charities Charities affiliate tasked by the Biden administration to transport border crossers. As part of an arrangement with the federal government, the Catholic Charities of San Diego (CCSD) has placed migrants on free commercial flights to other parts of the country, Breitbart reported in May.

CCSD told the Daily Mail that almost 50 immigrants arrive each day at hotel rooms paid for with taxpayer money before being flown elsewhere. But a Republican congressman, Rep. Lance Gooden of Texas, told Fox News last year that he visited the San Diego operation and saw around 100 migrants arrive on busses over the course of just an hour. They were then handed information packets explaining how to get to the airport, avoid security checks, enroll their children in local schools, and assimilate into American communities, he said.

‘Irresponsible’ activities at the Southern border

The revelations about Catholic Charities’ involvement in the Biden border crisis prompted subpoena threats last week from Rep. Gooden. In a February 9 letter to the charity, Gooden demanded that Catholic Charities provide documents about its “irresponsible” role in “encouraging, transporting and harboring aliens to come to, enter or reside in the United States.”

“The Biden administration is circumventing the rigorous security and safety standards federal agencies must uphold by deputizing NGOs to harbor, transport and encourage unauthorized aliens to resettle throughout the United States” in violation of federal law, the Texas Republican wrote. “It is irresponsible for Catholic Charities to fuel illegal immigration by encouraging, transporting and harboring aliens to come to, enter or reside in the United States.”

The letter asks for the number of illegal aliens that federal agencies released to the group in 2021 and the amount of immigrants that the charity has harbored and transported, among other things.

Gooden told Fox News Digital that Catholic Charities “can voluntarily provide the documents” or “be compelled to by congressional subpoena next year.”

The bishops and the border crisis

Illegal immigration has skyrocketed to historic levels under the Biden administration, which has moved quickly to dismantle President Donald’s Trump border security policies. CBP reported more than 2 million apprehensions at the Southern border in 2021, a twenty-year high and a nearly 300-percent increase over 2020. Border Patrol detained an unprecedented 1.9 million border crossers last year.

The crisis at the border corresponds to a surge in deadly overdoses, many of them linked to opioids that pass into the U.S. through Mexico.

Of the record-breaking 100,000 drug deaths tallied by the U.S. Centers for Disease Control and Prevention (CDC) in 2021, most were associated with synthetic opioids – predominantly fentanyl. Around 80 percent of the super-potent drug – which is 100 times stronger than morphine – comes across the Southern border, according to the U.S. Drug Enforcement Administration (DEA).

The rise in border crossings has also come with a surge of criminals entering the country. Nearly 10,000 illegal migrants with criminal records were arrested after re-entering the U.S. through August last year – four times more than in FY 2020. 448 were convicted sex offenders, compared to 156 the previous year.

The numbers don’t appear to be slowing down. Border Patrol detained 10 sex offenders in southwest border sectors during the first week of 2022.

Throughout the historic crisis, the U.S. bishops have continuously pushed the Biden administration to liberalize immigration policies even further. The USSCB praised the administration last fall when it terminated Trump’s “Remain in Mexico” program, citing “reciprocal gifts of migration,” and publicly pressed the government to raise the federal refugee resettlement cap from 15,000 to 125,000.

At the same time, they’ve been all but silent on the harm suffered by American communities, as well as the immigrants themselves.

The USCCB has long partnered with federal government to relocate migrants, and collected $742 million in taxpayer funding for refugee programs between the 2008 and 2018, Capital Research Center reported. The work also pays well for Catholic Charities. The salary of an executive director at the charity ranges as high as $147,000, according to payscale.com.

Catholic Charities is no stranger to scandal. LifeSiteNews revealed in 2013 that the group was a dues-paying member of the Coalition on Human Needs, an organization that lobbies for federal funds for Planned Parenthood. In San Francisco, a Catholic Charities affiliate has supported “Pride Month,” named pro-abortion politicians to an honorary committee, and placed foster children with homosexual couples.

The Catechism of the Catholic Church notes that countries can impose “various juridical conditions” to regulation immigration and that anyone seeking to emigrate is “obliged to respect with gratitude the material and spiritual heritage of the country that receives them, to obey its laws and to assist in carrying civic burdens.”