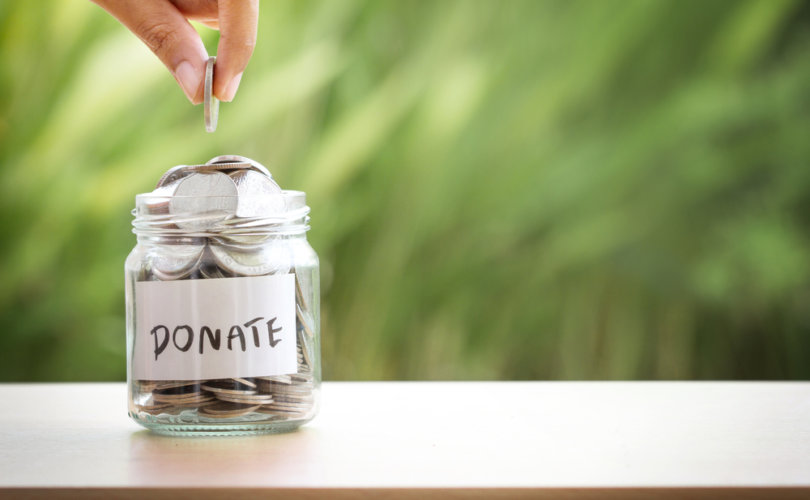 November 12, 2018 (LifeSiteNews) – Catholic charitable organizations fear that the Church’s sexual abuse scandal is driving Catholics in the pews to close their wallets and forego support for their agencies.

Most of those contacted on the prospect by the U.S. Bishops’ Catholic News Service said it was too early to be certain of a definitive hit to their bottom line, but some are acting to reassure benefactors their contributions will not go to sex abuse settlement payouts and attorney fees.

“This concerns me deeply,” Dominican Sister Donna Markham told Catholic Charities USA donors in an October 31 letter addressing calls to hold back contributing to Catholic institutions. The charitable group has in the past been embroiled in controversy over issues related to abortion and contraception.

READ: How Catholic charity is becoming an industry, and losing its mission

The Catholic Charities president and CEO told supporters in the letter that their donations do not fund the bishops or go to the dioceses.

“Anybody who is working in Catholic organizations right now is being hit by the fallout from the abuse crisis,” Markham said in the CNS report. “We have been faced with some of our significant donors saying, ‘No more money to Catholic Charities until the bishops straighten out this mess.'”

The impact won’t be known until after the holidays, Markham said, “But people are calling us daily saying, ‘Take me off your mailing list.'”

Jesuit-run American magazine reported last week that many of its readers surveyed said they had decreased their financial contributions to the Church as a result of the sexual abuse crisis.

“Fifty-seven percent of respondents said they had lowered the amount they gave to their bishop’s appeal,” the report said, “while 47 percent said they had reduced donations to their parishes.”

Donations to the Catholic Near East Welfare Association (CNEWA) have held steady in recent years, according to the CNS report, but the organization is continuing to emphasize its work in helping Christians in troubled areas of the world.

CNEWA has received letters from donors expressing anger over the bishops' failure to maintain moral authority over the church, Michael LaCivita, director of communications, for CNEWA, said.

The letters are “well thought out,” with carefully crafted words to express the moral outrage of Catholics, but do not hold the organization responsible.

Some writers have conveyed concern though, that contributions could go to abuse legal settlements since bishops serve as the organization's trustees.

“People want answers and they want to have their anger heard,” LaCivita said.

While fundraising has continued to meet annual goals at the Catholic University of America, the University has decided to put on hold a plan to build a residence for priests taking graduate level courses due to the crisis, CNS reported.

Because bishops were involved in raising money for the effort, University officials and bishops on the board of trustees felt it was best to postpone the project for future consideration, Scott Rembold, vice president for university advancement, said.

According to CNS, two organizations, Foundations and Donors Interested in Catholic Activities (FADICA), and the Leadership Roundtable, are offering expertise and suggestions to the bishops to address the anger and concern felt by Catholics.

FADICA has convened a working group to address the abuse scandal, and recommendations will be shared with the USCCB after the group convenes its annual meeting in February.

The Leadership Roundtable was established in 2005 following the initial break of the sex abuse crisis to offer lay expertise in best practices and accountability in the U.S. Church’s management, finances, communications and human resources development.

More than 50 dioceses contacted the organization after release of the Pennsylvania grand jury report in August detailing sex abuse over 70 years in six of the state’s eight dioceses.

MarketWatch reported in late August that some Catholics were beginning to withhold their Church contributions until there is accountability from Church leaders.

Representatives of the Leadership Roundtable are telling dioceses that communication is crucial in responding to the sexual abuse scandal.