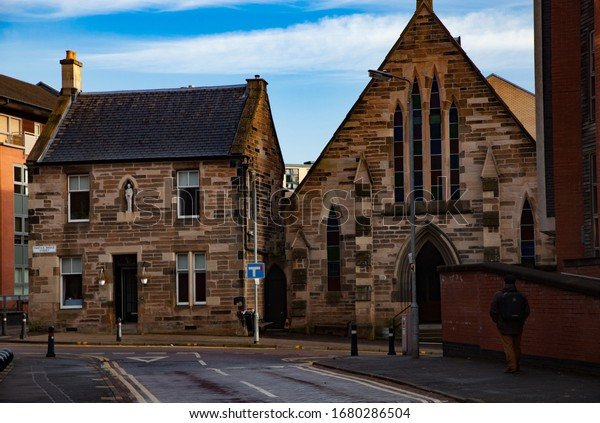 GLASGOW, Scotland, July 29, 2021 (LifeSiteNews) – Just two days after a priest was attacked with a bottle in Edinburgh’s Catholic cathedral, a 163-year-old Catholic church in nearby Glasgow was engulfed in flames.

At around 2:40 a.m. on Wednesday morning, a team of 30 firefighters was dispatched to the parish church of St. Simon’s in Partick, a district within Glasgow’s leafy west end, where a large fire was consuming the building, the third oldest Catholic church in the city.

After evacuating the residents of neighboring buildings, the firefighters tackled the blaze. The historic landmark, however, was completely gutted within half an hour, according to a report in The Scotsman. One person was saved from inside the church before it was destroyed; no one was injured during the incident.

A spokesman for the Scottish Fire and Rescue Service confirmed the details of the incident in a statement: “We were alerted at 2.40 a.m. on Wednesday, July 28 to reports of a fire within a church on Partick Bridge Street, Partick, Glasgow.”

“Operations Control mobilised six fire appliances including two height appliances and more than 30 firefighters are in attendance and working to extinguish the fire.”

“One person was assisted from the property and given precautionary treatment at the scene. Adjacent properties have been evacuated as a precautionary measure and nearby residents are advised to keep windows and doors closed due to smoke.”

Police Scotland also commented on the incident, noting that “the fact that the building is unsafe, at this time neither Police nor Scottish Fire and Rescue officers have been able to get in to the church to establish how the fire started.”

“Enquiries are very much at an early stage and we cannot speculate at this time as to the cause,” the police continued.

A spokeswoman added that the police does not currently suppose that the fire is part of a “sectarian” [i.e. anti-Catholic] or hate-crime related offence.

St Simon's has been home to a large Polish community since the Second World War when “soldiers of the Polish Armed Forces who had escaped the Nazis and who were based in Yorkhill Barracks needed a church,” the parish website reads. Until the fire, Masses in Polish were celebrated in the church twice a week, including Sundays, by a local Polish priest.

The church building, originally opened in 1858, was subject to a thorough restoration project between 2005 and 2008, coinciding with the 150th anniversary of the church. Around £400,000 was raised for the project, half of which come from the efforts of the congregation, and the other half courtesy of a grant from Heritage Scotland.

A spokesman for the Archdiocese of Glasgow, in which St. Simon’s is situated, said that the demise of the church “will be a blow to people far beyond the west end of Glasgow.”

“Though small in size, St. Simon’s was well-frequented and was the spiritual home of the Polish community in the west of Scotland who had established a shrine there.”

He added that the church acted as “a focal point for the local community, and especially the homeless who benefited from a café on site which had to be suspended during the pandemic.”

“The church of St Simon’s is linked to the larger parish of St Peter’s in Partick and worshippers will be accommodated there,” the spokesman stated.

“The cause of the blaze is not immediately apparent, but we will work with the Fire Service as they investigate the site. Structural engineers are on site to advise on the necessary measures to make the remains of the building safe,” he continued.

“St. Simon’s was a much-loved landmark at Partick Cross and its loss is a heavy blow.”

LifeSiteNews reached out to Sancta Familia Media, a Catholic video apostolate based in Lanarkshire, near Glasgow. A spokesman for the company said that the church’s destruction “was very sad news.”

The spokesman for Sancta Familia Media, who asked not to be named, stressed that the cause of the fire was as yet unknown.  However, he added that “against a backdrop of increasingly anti-Catholic sentiment in Scotland, including a priest attacked at the weekend and other incidents, one can only wonder whether there is a connection.”

“It just increases worries for us Scottish Catholics that this will continue, especially in light of some Scottish government policies on hate crimes which could marginalise us,” the spokesman explained, in reference to the controversial Scottish Hate Crime Bill.

The bill was proposed in 2020 by Scotland’s Health Minister Humza Yousaf, and later passed by the Scottish Parliament in March 2021. The bill has refined the law around hate speech, including a new provision for “stirring up hatred,” which criminalizes behaving “in a manner that a reasonable person would consider to be threatening or abusive.” The law extends to conversations and materials kept in the privacy of one’s own home.

A proposal for criminalizing “possession of inflammatory material,” which could include the Catechism of the Catholic Church for its teaching that homosexual acts are “intrinsically disordered,” was dropped after strong opposition from the Catholic bishops.

A few hours after the fire had destroyed St. Simon’s, Yousaf posted a tweet expressing his sympathies with local Catholics devastated by both the fire and the assault upon the Edinburgh priest.

“What a devastating couple of days for Catholics in Scotland. First a cowardly attack on a priest in his place of worship, followed by this. I know St. Simon’s had a special place in the Polish community's heart,” the Health Minister wrote.

“Solidarity with our Catholic community in Scotland.”

What a devastating couple of days for Catholics in Scotland. First a cowardly attack on a Priest in his place of worship, followed by this. I know St Simon's had a special place in the Polish community's heart.

Solidarity with our Catholic community in Scotland. https://t.co/UUeyUqxIOQ

The burning of St. Simon’s is not the first tragedy to strike the Glasgow church. In 2019, the church suffered an attack from vandals who invaded the sanctuary, damaging it in the process, and breaking a statue of Our Lady of Czestochowa.

Though police stated at the time that they found no evidence of anti-Catholic sectarianism, many commentators took to social media to point out a worrying pattern of anti-Catholic sentiment in the country, which has been reportedly on the increase within the last few years.

On July 29, 31-year-old Jason Irvine, described of no-fixed-address, appeared in court, charged with both the assault of the 35-year-old Edinburgh priest and the assault of another individual in the Scottish capital's Princes Street Gardens. The attacks are said to have occurred within ten minutes of each other.