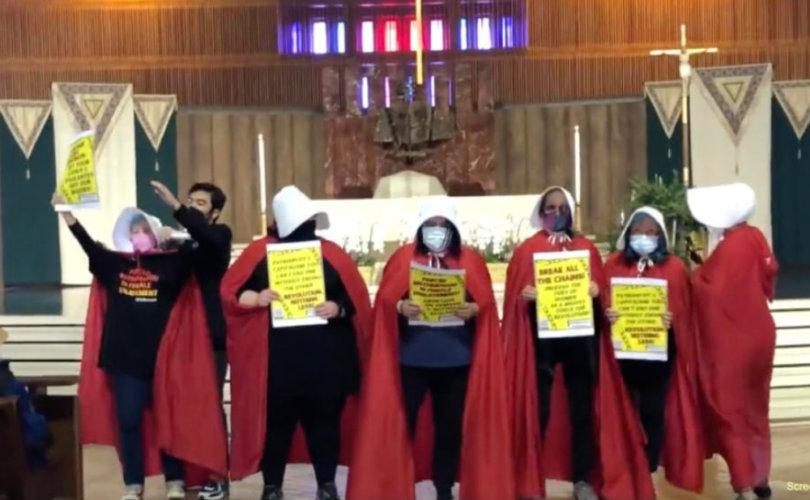 (Live Action) – On Sunday, February 27, pro-abortion protesters disrupted Mass at the Cathedral of St. Mary of the Assumption in San Francisco.

Although major pro-abortion organizations, including the Women’s March Foundation, have recently begun to discourage the use of “handmaid” imagery, all six women who entered the church on Sunday were wearing the characteristic red-cloaked costumes over t-shirts proclaiming “Forced motherhood is enslavement.”

They carried signs featuring various messages, including “Break all the chains.” They claimed the purpose of their action was “to indict the Catholic Church’s role in the push to ban abortion & enslave women.”

Cheers to those who dressed as “Handmaids” and disrupted mass at St. Mary’s Cathedral in SF to indict the Catholic Church’s role in the push to ban abortion & enslave women.

Take to the streets for abortion rights March 8 👉 https://t.co/h1XWlkvASf pic.twitter.com/p4H7jgPclD

“At around 11am I noticed people starting to gather across the street, and about 15 minutes later I noticed they had started to put on handmaid costumes,” Turner stated.

“At around 11:30 they entered the church and approached the altar before being stopped by private security. They screamed at churchgoers that ‘banning abortion is female enslavement.’”

The protesters were repeatedly asked to leave by private security, but failed to comply, and were physically escorted out. After being ejected, they gathered on the steps of the cathedral to continue their protest.

“Cameras [from the local media] were starting to come to them to film so I knew the pro-lifers needed to get in front,” Turner recalled. “I walked in front of their group with my sign, which is when they started to attack me. They took my sign and threw it multiple times, shoved me, [and] pushed my bullhorn into my face.”

Private security broke up the group, which retreated to the courtyard sidewalk.

Members of Pro-Life San Francisco attempted civil discourse with the pro-abortion protesters, but, according to Turner, “The dialogue got nowhere as the pro-choicers used circular logic, dehumanizing rhetoric, and fallacious philosophy to justify violence against the unborn.”