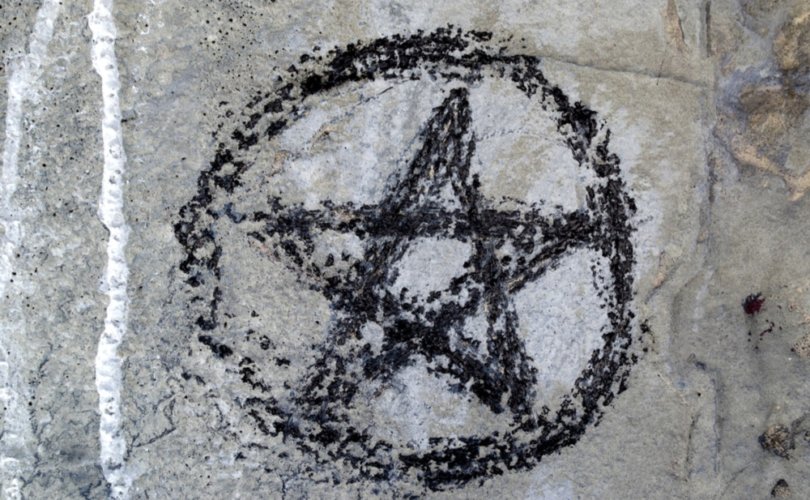 Without mincing words, the local archdiocese of Hartford wrote on Facebook, “The underlying motive of these sacrilegious attacks is clear: to intimidate and instill fear in the hearts of those who worship Christ.”

“However, our cherished Catholic faith has survived for 2,000 years in the faces of many different oppressors, and it is not about to yield now,” the Facebook post continued. “Therefore, we remain unafraid and resolute in our faith, and we will pray for a conversion of the hearts of those who wish to terrorize us.”

The archdiocese, led by Archbishop Leonard P. Blair, added that it was not answering hate with hate, but instead, “these attacks make our love and unity stronger, and our prayers ever more steadfast. For as we learn in John’s Gospel, we cannot truly love God if we do not love our brother.”

St. Joseph’s Church, where the vandalism occurred, is part of St. Mary’s Parish, where Fr. Michael McGivney founded the Knights of Columbus in 1882. The organization with more than two million members aims to promote public policy positions corresponding to the Catholic faith as well as do charitable works and support its members.

Michael McGivney is a Venerable on his way to be beatified. A miracle attributed to his intercession was approved by the Vatican earlier this year. McGivney’s tomb is located in St. Mary’s Church in New Haven.

On the morning following the attack, the parish announced via Facebook that it was assessing the situation and making plans to bless the church building. Masses, confessions, and adoration were canceled.

“I would ask everyone in the parish to pray to Our Lord in reparation for this sacrilege, and to St. Michael for protection against all the powers of hell,” wrote Fr. John Paul Walker, O.P., the pastor. “Please pray, too, for the perpetrator of this action, who is clearly a very disturbed individual in need of serious help.”

The Archdiocese of Hartford linked the act of vandalism in New Haven to “an apparent trend of desecrating Catholic spaces throughout the nation, as evidenced by incidents in Chattanooga, Queens, Boston, Sacramento, and Ocala” in recent days and weeks.

On Saturday in Ocala, Florida, a 24-year-old man was arrested and charged with attempted murder for setting fire to Queen of Peace Catholic Church. He drove his car into the church and proceeded to light two gallons of gasoline on fire. Parishioners were inside the church preparing for Mass but were able to flee without injury.

A statue of Our Lady, located in Queens, was vandalized last Friday morning. “Investigators said an unidentified person was caught on camera spray-painting ‘IDOL’ on the statue in front of Cathedral Preparatory School and Seminary,” reported the local CBS station.

In Chattanooga, Tennessee, a five-foot-tall statue of Our Lady was beheaded Saturday in front of a church. “The statue had been torn off of its pedestal, and its head had been removed,” reported the local ABC station. “Church officials found no other damage on the property.”

Jim Wogan, director of communications at the Diocese of Knoxville, commented, “We don’t know if this was the targeted desecration of a sacred statue, or some kind of misguided prank, but it hurts. For whatever reason we are living in a very chaotic time and anger seems to be the default setting for people. Our bishop has asked that we live by the example set in the Gospel of Matthew, to treat others as we ourselves would want to be treated.”

Another beheading of a statue, this time of Christ, the Good Shepherd, took place Tuesday night or Wednesday morning in Miami. “This is an attack on the church,” said Mary Ross Agosta of the Archdiocese of Miami, according to the Miami Herald. “This is not only private property, it is sacred property.”

“This is not something you can trip over and say, ‘Oh, sorry,’” she added. “Someone did this intentionally.”

In Boston, a statue of Our Lady was set on fire last weekend. Dozens of Catholics, including many members of religious orders, attended a prayer vigil in front of that statue on Wednesday, praying for the perpetrator. “We’re prayerfully saying to this person or persons: We love you. We forgive you. And we are here to serve and help you in any way you may need. This is why we’re here primarily,” said Fr. John Currie, the local pastor.

In California, several statues of St. Junípero Serra, an 18th-century Franciscan missionary in California, were removed or destroyed in recent weeks.

In June, the Los Angeles Times reported that Ventura Mayor Matt LaVere, along with representatives from the Barbareño/Venureño Band of Mission Indians and Father Tom Elewaut, a Catholic priest based at the San Buenaventura Mission in Ventura, had issued a joint statement agreeing to take down the statue of Serra outside Ventura City Hall and have it “moved to a more appropriate non-public location.”

On Olvera Street in Los Angeles, 100 people reportedly helped to topple a statue of the missionary saint with ropes.

In Golden Gate Park, San Francisco, activists pulled down another statue of St. Junípero Serra. A video of the incident shows those in attendance cheering as the statue is toppled. One person can be seen hitting the statue with fists and another person hitting it with a skateboard once it has fallen to the ground.