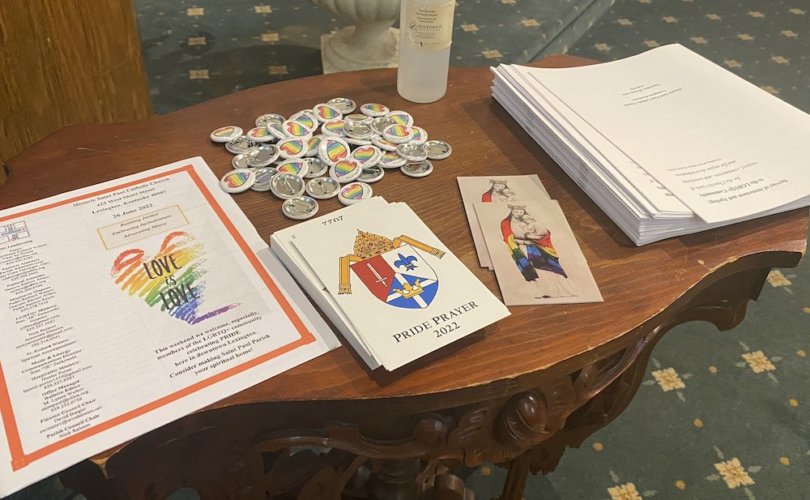 LEXINGTON, Kentucky (LifeSiteNews) – A Catholic church in Kentucky hosted a prayer service that sought to issue an apology to homosexuals on behalf of the Church.

St. Paul’s Catholic Church in Lexington hosted a “Service of Atonement and Apology to the LGBTQ+ Community” last Thursday. The pastor, Rev. Richard Watson, said that the move was “unprecedented within the region.” A copy of the program said the service was designed to serve as an apology for “the Church’s lack of respect, compassion, and sensitivity to discrimination.”

“There are those that call me a heretic. I have gotten hate mail from all over the country. That’s okay…love wins.”

– Rev. Richard Watson of St. Paul Catholic Church as they host an “unprecedented” service of apology to the LGBTQ+ community in Lexington, KY. @WKYT pic.twitter.com/sRPZHsNUs7

A letter by the parish’s “LGBTQ+ Ministry Director” JR Zerkowski titled “Apology and Reconciliation” said “The words the Church uses to describe me still sting, but I believe we are witnessing the evolution of doctrine, so I have hope.”

“I know many LGBTQ+ persons – far too many – have been hurt by the Church and many have left,” the letter continued. “So have their families and friends. LGBTQ+ persons left with good reason: to survive. Apologies aren’t coveralls for the past wounds, but they are a beginning.”

Zerkowski directed the event. He led the service and began with a prayer, saying “We gather to celebrate our unique diversity that has not always been celebrated, not always held sacred.”

“We gather to seek reconciliation for the hurtful words and actions of the Church toward LGBTQ+ siblings and their families and friends,” Zerkowski continued.

Prayers at the service called on parishioners to “build a just society and church, for LGBTQ people” and called for their actions to always “include rather than exclude.” Another prayer called on God to make parishioners “disruptors of the status quo” and “disruptors of stereotypes, philosophies, or would-be-theologies, that do not consider every person as equal and worthy of dignity.”

According to the service’s program, the apology was delivered by Watson. Rev. Marsha Moors-Charles, a founding pastor of Bluegrass United Church of Christ, accepted the apology.

According to the Catechism of the Catholic Church (CCC), homosexuality is gravely disordered. “Basing itself on Sacred Scripture, which presents homosexual acts as acts of grave depravity, tradition has always declared that ‘homosexual acts are intrinsically disordered.’ They are contrary to the natural law,” the CCC states.

The CCC further explains that while people with homosexual tendencies “must be accepted with respect, compassion, and sensitivity,” homosexuals are called to a life of chastity.

Pope Francis has confused some about the Church’s position on homosexuality. Last month, he welcomed a group of gender-confused people at the Vatican. One person from the group said “we felt welcomed,” and a gender-confused man claimed that the Pope told him to “always be myself, but not to be wrapped up in prejudice against the Church.”

Both Dolan and McElroy celebrated an LGBT Mass while both were in San Diego. Francis recently elevated McElroy to the position of Cardinal. McElroy is also a close ally of the Pope’s other leftist, pro-LGBT U.S. cardinals, including Cardinal Joseph Tobin and Cardinal Blase Cupich.

Earlier this year, Francis met with dissident priest Fr. James Martin, S.J. Francis had Martin deliver a letter to “LGBT Catholics” that says that a “selective” Church is a “sect.” Francis previously met Martin in 2019, a move which Martin has used to claim that the Pope supports his activism.

John Stowe, the Bishop of Lexington, Kentucky, is also known for his extreme LGBT activism. Stowe is an appointee of Pope Francis.

LifeSiteNews reached out to Zerkowski for comment but has yet to receive a response.