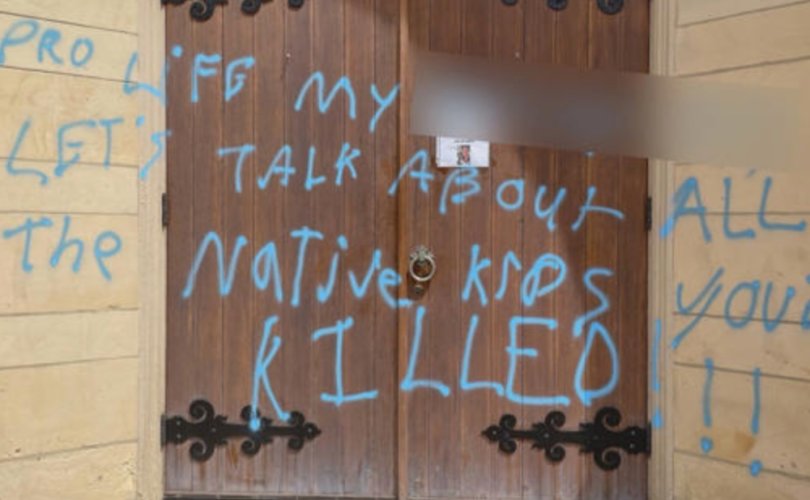 Local media WMTV reported that pro-abortion activists defaced the doors of St. Bernard Catholic Church in Madison, Wisconsin on the night of July 3. Abortions ceased in the state following the reversal of Roe v. Wade.

The vandals sprayed blue paint on the doors and walls of the church, leaving the message “Pro-life my **** ** Let’s talk about all the native kids you’ve killed!!!”

The reference to killing “native kids” is an anti-Catholic blood libel that surged into prominence last summer after unfounded accusations that murdered children were buried near Canadian government residential schools formerly run by Catholic religious orders.  No bodies have been found in, let alone exhumed from, the supposed clandestine burial sites. Nevertheless, many Christian churches were burned down in the wake of the allegations.

READ: We need to reexamine the ‘mass grave’ reports from the Canadian residential school

“St. Bernard Parish is saddened over the graffiti on the front of the church,” St. Bernard’s pastor, Fr. Michael Radowicz, told WMTV.

“We understand people’s anger over the recent ruling by the Supreme Court, but this does nothing to solve any issues,” he added. “We join in prayer for those who did this, that the Lord may heal their hearts. An investigation is ongoing with Madison Police.”

Catholic buildings are subjected to pro-abortion violence because of the unwavering pro-life teachings of the Catholic Church. In Evangelium Vitae, John Paul II employed his full papal authority to publicly condemn abortion as a grave sin, “since it is the deliberate killing of an innocent human being.”

Madison police are offering rewards for anyone with information regarding the attack that leads to an arrest.

This latest vandalism follows a firebombing attack on the Wisconsin Family Action office committed in May by radical pro-abortion group Jane’s Revenge. Jane’s Revenge has promised to escalate their attacks.

The pro-abortion terror group has publicly claimed responsibility for attacks against pro-life organizations and churches across America. There have been over 20 attacks on pregnancy centers across the U.S. since the draft of the Supreme Court decision overturning Roe v. Wade was leaked in May.

A recent Women’s March survey gauged supporters’ willingness to put ‘our bodies on the line’ to protest the Roe v. Wade reversal.

The violence appears to have no clear end in sight, with the Department of Homeland Security predicting that terrorist attacks could continue “for weeks” after the Supreme Court’s overturn of Roe v. Wade.