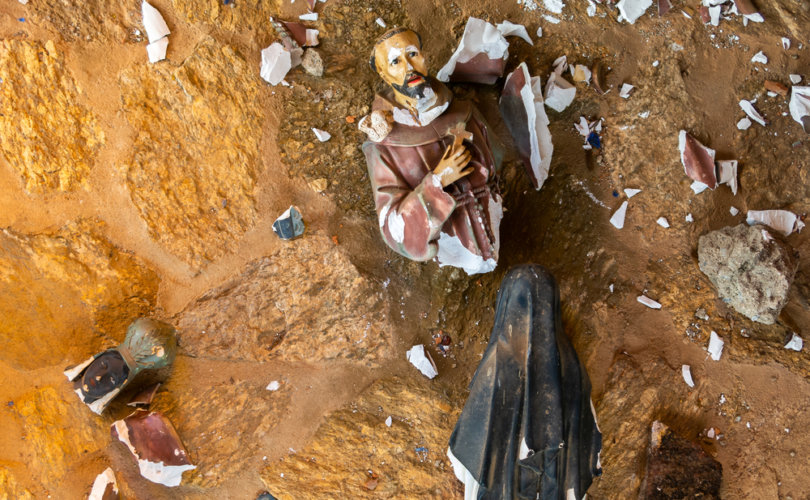 (LifeSiteNews) — Following a sharp uptick in acts of vandalism and destruction on church buildings across Canada in 2020, a Canadian Catholic civil rights group has established an online archive to track and detail all church attacks within the country.

The Catholic Civil Rights League (CCRL) set up the Church Attacks Database, a publicly accessible catalogue of all known attacks on Catholic churches within Canada. To date, 153 attacks are listed from 2010 through to 2021.

The database shows churches across the country having suffered arson, breaking and entering, broken windows, defacement, desecration, graffiti, general property damage, public disturbances, public indecency, theft, harmful alterations of church billboards, and even assaults on the clergy. All attacks have been identified by date and place.

The B.C. Catholic, the official newspaper of the Archdiocese of Vancouver, noted that at least one attack in the Vancouver archdiocese was not documented on the database: an attempted arson attack at the Grotto of Our Lady of Lourdes in Mission, British Columbia, on July 4, 2021.

The CCRL has included a reporting link on the database’s main page to encourage users to add any attacks, be they recent or historic, in order to make the feature as comprehensive as possible.

CCRL Executive Director Christian Elia told The B.C. Catholic that attacks periodically increase during the Easter and Christmas seasons, “which is disturbing, and they have been on the rise in recent years.”

In response, his team hopes that the database might raise awareness about anti-Catholic hate crimes in Canada, especially among governing bodies at the provincial and federal level; however, “before that happens, if anyone is going to be roused and called to action, it will be we Catholics ourselves,” he said.

Elia added that the database also serves “to remind Canadians, and even our own friends and supporters, that if they witness an act of violence in their own community, that they are not alone, unfortunately.”

Furthermore, by drawing together the vast number of anti-Catholic attacks on churches, Elia proposed that Catholics might “find the courage to speak together in one voice” such that the authorities take notice of the repeated pattern of violence against Catholicism and where it is represented.

Madeleine Enzlberger, executive director of the Observatory on Intolerance and Discrimination Against Christians in Europe, commented that “[in] media and politics, hatred of Christians is hardly noticed,” adding that the phenomenon is an “obvious social problem.”

Enzlberger highlighted that a report by the Organization for Security and Co-operation in Europe “only reflects part of this trend, which we have been documenting for years, and yet it is a loud wake-up call against indifference and what seems to have become a ‘fashionable’ bashing of Christians.”

The researcher hopes to see initiatives like that of the CCRL “empower Christians, so they have the ability to respond correctly to situations of injustice and dare to speak up.”

In the neighboring U.S., an October report from the U.S. Conference of Catholic Bishops (USCCB) showed there had been “at least 113” attacks including “arson, statues beheaded, limbs cut, smashed, and painted, gravestones defaced with swastikas and anti-Catholic language and American flags next to them burned” at churches in 29 states and the nation’s Capitol since May 2020.

In like manner, a new report from the Observatory on Intolerance and Discrimination Against Christians in Europe has found that violence against Christians has become a “rising phenomenon” in many European states, identifying the U.K., France, Germany, Spain, and Sweden as the most affected.

The December 7 report, “Under pressure: Human Rights of Christians in Europe,” highlighted that the five nations have experienced pressures on freedom of expression, parental rights, and freedom of conscience, with a particular emphasis on the increase in discrimination against Christians stemming from secular and Islamic ideologies.

The report stated that there has been a 70 percent rise in hate crimes against Christians between 2019 and 2020, explaining that “[t]he negation of a public voice is mainly based on strong and sometimes even extreme opposition to Christian morals derived from core beliefs.”

“In some cases, it does not stop at negation, but goes even further toward a criminalization of public or even private opinions,” the report warned.