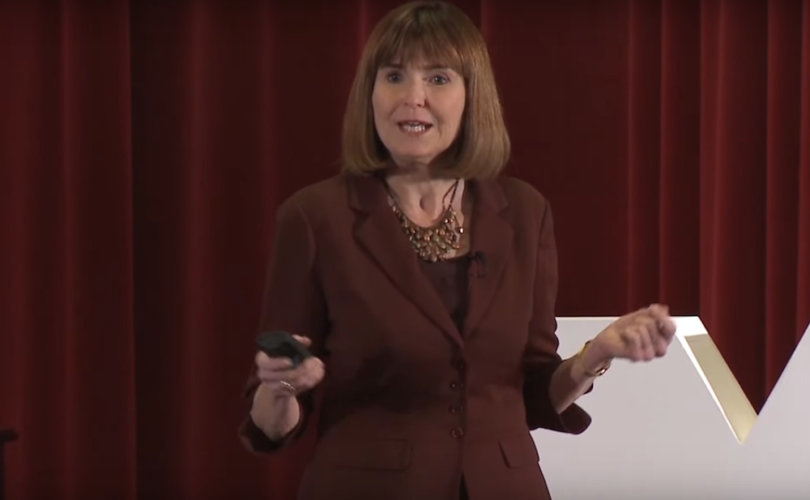 NOTRE DAME, Indiana, April 5, 2017 (LifeSiteNews) – A women’s activist and author said she was uninvited as commencement speaker for a Catholic women’s college because she received an award from Planned Parenthood more than a decade ago.

The activist, Jean Kilbourne, equated the move to the squelching of free speech.

“I felt it was chilling, and I feel that way in general with what’s going on in the country and on college campuses,” she stated. “There’s this polarization that’s so extreme that it becomes difficult to hear different points of view.”

Kilbourne said she was stunned and disappointed that she was dropped as commencement speaker for the May 20 ceremony at St. Mary’s College, according to The Boston Globe.

Kilbourne, a regular lecturer on gender and the media whose website describes her as a “pioneering activist, speaker and writer,” said she did not plan to discuss abortion or Planned Parenthood. She intended to focus her speech on negative images of women in the media and advertising.

Kilbourne said she has spoken at 52 Catholic colleges and universities without a problem. That list includes St. Mary’s College, which has 1,500 students and is situated adjacent to the University of Notre Dame.

In 2014, she gave a lecture there for “Love Your Body Week” titled “The Naked Truth: Advertising’s Image of Gender.”

“It’s not even that I worked for Planned Parenthood or spoke about it,” Kilbourne said of being uninvited this year at St. Mary’s. “But simply the fact that I got this award was enough to knock out this invitation and my commencement address. It seemed to me a sign of the times.”

Saint Mary’s College had not officially announced Kilbourne as this year’s commencement speaker or signed a contract with her, The Globe reported. The school released a statement regarding Kilbourne’s invitation.

“We consider our deliberations about, and discussions with, prospective college commencement speakers to be private,” St. Mary’s College spokesperson Kara Kelly said. “As yet, no public announcement has been made about the 2017 commencement speaker. Saint Mary’s expects to announce commencement details in late April.”

Kilbourne received the invitation to speak last month from her agent, she said. The agent had forwarded a contract and Kilbourne’s biographical information to St. Mary’s, including a list of the awards Kilbourne has received. Kilbourne then heard back from her agent two weeks ago saying the college declined to sign the contract because of the award from the abortion giant.

Information on the award posted on Kilbourne’s website stated in part that it is given “in honor of the family-planning pioneer,” and also that the abortion chain’s affiliate “presents this annual award to an individual or group who shares the courage and passion for social change that Dr. Standish embodied.”

The apparent withdrawal of Kilbourne’s invitation signifies a departure from other Catholic colleges and universities that welcome commencement and lecture speakers or  give awards to individuals who promote causes that violate Church teaching.

Kilbourne immediately made her situation with St. Mary’s College known on social media, tweeting twice to share The Boston Globe piece the day it was published. She said she had “looked forward very much to speaking to the young women at St. Mary's College.”

Kilbourne doesn’t hide her support for Planned Parenthood and related positions in her social media posts.

Kilbourne stated on her Facebook page she was honored to co-host a fundraiser for the Planned Parenthood League of Massachusetts in 2014. On March 22 of this year, she had shared a story on Twitter from the radically pro-abortion Jezebel.com website that was critical of defunding the abortion giant. Kilbourne commented in the tweet, “Blocking access to Planned Parenthood isn't only bad for women — it's bad for the economy.” The tweet also included the pro-Planned Parenthood “#IStandWithPP” hashtag.

An earlier tweet from Kilbourne promoted the “Swing Left” campaign “to win back the House in 2018.”

And she tweeted in support of the massive pro-abort women’s march in January.

“Jean Kilbourne complains about polarization, suggesting that abortion is just another viewpoint,” he said. “Well, my message for Kilbourne is that the sin of abortion is one of the greatest causes of polarization.”

Aside from the Planned Parenthood award, Ritchie pointed out, the anti-Catholic, pro-abortion National Organization for Women also honored Kilbourne with awards in 1982 and 2010.

“Anyone who publicly supports the killing of innocent babies is unfit to speak on campus, any campus, but especially on a Catholic campus,” stated Ritchie.

Cardinal Newman Society President Patrick Reilly said the College’s decision was “a strong witness to the faith during this Lenten season.”

“Canceling a speaker or an award is difficult for everyone, especially the canceled speaker, and she is understandably hurt,” Reilly said. “However, the leadership of St. Mary's has righted a wrong, thereby teaching its students more by its actions than could ever be taught in the classroom.”