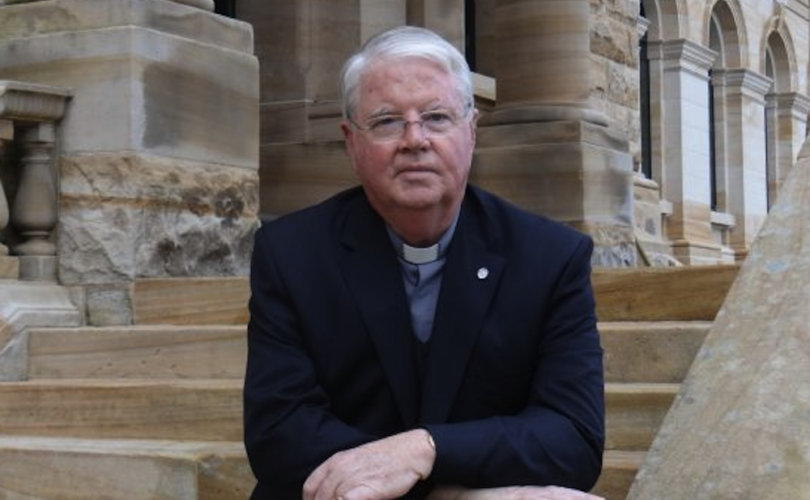 Father Ross Jones is the rector at St. Ignatius College in Sydney, Australia.

MELBOURNE, Australia, August 30, 2017 (LifeSiteNews) – Leaders from two prominent Jesuit schools in Australia have tacitly endorsed gay “marriage” before the country’s vote on the issue in communications to parents, staff and students.

Leadership for St. Ignatius College in Sydney and Xavier College in Melbourne used Pope Francis' emphasis on love as the “primary Gospel value” and the primacy of individual conscience to give a positive portrayal of homosexual relationships. Their statements also directly defied Catholic teaching and recent statements by Australian prelates about upholding Catholic identity in Church institutions.

The Jesuit schools are alma maters for generations of Australian politicians, The Sydney Morning Herald reported.

St. Ignatius rector Father Ross Jones asserted that Catholic couples could engage in sexual relationships “in good conscience” for reasons other than procreation under the “order of reason” school of natural law rather than a physicalist view.

“Presumably, same sex-couples who make such a commitment to each other in good conscience do so by reflecting on experience and on what it is to be human, using their God-given reason,” wrote Father Jones.

The Catholic Church teaches that sexual relations are reserved for married couples – consisting of one man and one woman – in the context of sacramental marriage.

Pope Francis wrote in his controversial apostolic exhortation Amoris Laetitia that a person’s “individual conscience needs to be incorporated into the Church’s praxis in certain situations which do not objectively embody our understanding of marriage.”

Father Jones also ran through the rights already allowed for Australia’s same-sex couples and said many want to marry “for the same reasons as their opposite-sex counterparts.”

“The Church needs to reflect on why there such strong support for same-sex marriage among the young,” he said, and cited Irish Archbishop Diarmuid Martin, who has spoken positively of same-sex unions, to say the Church needed “a reality check.”

“In my experience, there is almost total unanimity amongst the young in favour of same-sex marriage,” Father Middleton wrote,” and arguments against it have almost no impact on them.”

“They are driven by a strong emotional commitment to equality, and this is surely something to respect and admire,” he continued. “They are idealistic in the value they ascribe to love, the primary gospel value.”

Father Middleton also tried to detach sacramental marriage from Australia’s upcoming postal vote on gay “marriage.” The Church should have a voice in the secular sphere, he said, but “The vote relates to marriage as a civil right and is not in essence about the Catholic sacramental understanding of marriage.”

Australia is conducting a voluntary postal survey on same-sex “marriage” beginning in September. If the postal ballots signal a “Yes” majority, the government will introduce a bill legalizing same-sex “marriage.” If Australians return a majority of “No” votes, a challenge is expected from gay “marriage” activists.

Father Middleton went on to infer the Catholic Church was opening itself up to accusations of hypocrisy subsequent to findings of the Royal Commission into Institutional Responses to Child Sexual Abuse.

“To be brutally honest,” he wrote, “the church speaking out in controversial areas around sexuality risks being mired in vitriolic attacks on its credibility in the aftermath of the royal commission.”

The Xavier College priest said Catholics are questioning whether banning gay “marriage” equates to discrimination, stating, “For many Catholics engaged in the debate the critical question is whether the denial of the right to civil marriage is an 'unjust discrimination'?”

“I do not know if Riverview (Sydney) has any LBGTQI teachers or parents in the college and if they have intentions of marriage,” he wrote in St. Ignatius' Viewpoint newsletter. “I won't be asking with a view to removing them from the school.”

“Those of same-sex orientation who are part of our community are welcomed and valued as part of the greater mission of the church,” Hine continued, “and that is to bring God's love to the world and those in need of it.”

Hine said it was a difficult time for same-sex-attracted people, who faced an “onslaught” from not only the media but also “religious institutions.”

A recent poll commissioned by same-sex “marriage” advocates had 66 percent of Catholics saying they were leaning toward a “yes” vote in the forthcoming postal survey, representing the same percentage as the general population.