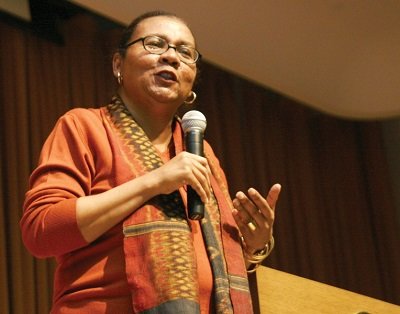 Bell Hooks is an outspoken abortion advocate who claims that it is not possible to oppose abortion and be a feminist.

February 25, 2016 (CardinalNewmanSociety) — St. Norbert College in De Pere, Wis., will once again host radical feminist “bell hooks” (who prefers not to capitalize her name) in residency, despite her advocacy for abortion and criticism of the Catholic Church.

This is the third time that Hooks will visit St. Norbert College. The St. Norbert Times reported that the campus is “already covered with posters showing a familiar face marking the upcoming bell hooks residency that will take place during the week of April 18-22.”

St. Norbert College’s Cassandra Voss Center for women’s and gender studies is a sister center to Berea College’s “bell hooks Institute” in Kentucky. The College’s website called Hooks’ residency “a singular honor” and touted its status as “the only small liberal arts college honored to host a week-long residency by hooks.”

“She will be in dialogue with noted activists, scholars and artists,” the website noted. “hooks will also have several conversations about her work, which includes a catalog of over 40 books.”

One of those books, Feminism is for Everybody, professes outright abortion advocacy. In it, Hooks claims that it is not possible to oppose abortion and be a feminist. “Granting women the civil right to have control over our bodies is a basic feminist principle,” Hooks wrote on page 114.

“Many of us were the unplanned children of talented, creative women whose lives had been changed by unplanned and unwanted pregnancies; we witnessed their bitterness, their rage, their disappointment with their lot in life,” wrote Hooks earlier on in the book, on page 26. “And we were clear that there could be no genuine sexual liberation for women and men without better, safer contraceptives — without the right to a safe, legal abortion.”

This year, Hooks is slated to dialogue in the College’s Walter Theater with Hari Kondabolu on April 19 and Parker J. Palmer on April 20.

Kondabolu, described as a political comic, has supported abortion on his social media pages several times. Last year, NARAL Pro-Choice America encouraged men on Twitter to use the hashtag #MenForChoice in preparation for the organization’s DC Men For Choice event. “#MenForChoice are so important to the pro-choice movement and the fight for gender equality,” NARAL celebrated. Kondabolu’s tweet utilizing the hashtag — “#MenForChoice because most cis men wouldn't want someone else in charge of their balls.” — is one of the top tweets promoted by NARAL.

Last year, Hooks’ residency at St. Norbert College featured a dialogue with Gloria Steinem, a known abortion advocate who has lauded her own abortion and is credited with popularizing the phrase “If men could get pregnant, abortion would be a sacrament.” The opening dedication of Steinem’s latest book honors the London doctor who aborted Steinem’s baby when she was 22-years-old in 1957.

The dialogue between Hooks and Steinem was billed by the College as a discussion on domestic violence and feminine solidarity, but Steinem’s history of abortion advocacy raised protestations from concerned Catholics, including Bishop David Ricken of Green Bay, Wis., who urged the College to rescind its invitation to Steinem. Even if Steinem would only be discussing domestic violence, her presence nevertheless contradicted the College’s Catholic identity due to her status as “such a high profile and well-known protagonist and activist of abortion rights,” Bishop Ricken wrote.

“One cannot build one’s claim to a right based on the denial of another’s fundamental right to life,” Bishop Ricken continued. “One cannot really advance the rights of women while taking the life of an innocent child in the womb.”

A recording of the event revealed that domestic violence was barely discussed. Instead, Steinem and Hooks spent the majority of the time discussing “reproductive rights” and criticizing the Catholic Church for its patriarchal oppression of women.

“Who owns women’s bodies, who says we can’t control our own reproductive lives?” asked Steinem at one point during the dialogue. Later on, she claimed that “the patriarchal system … controls reproduction and says it’s only moral and okay when sexuality … can end in reproduction.”

The Steinem and Hooks event “received a huge turnout from both students and the public and was certainly a dialogue to be remembered,” the St. Norbert Times reported.

Last year, College spokesman Mike Counter told the Newman Society that the dialogue presented the students with an opportunity “to hone their critical thinking skills” by being “exposed to a wide variety of ideas and perspectives.” But as the recording demonstrated, only one perspective — Steinem’s and Hooks’ version of feminism — was presented to students and attendees.

The Cardinal Newman Society contacted the College to inquire why Hooks was being hosted a third time and whether her continuing residencies impacted the institution’s Catholic identity, especially taking into account last year’s Steinem dialogue, but no response was received by time of publication.