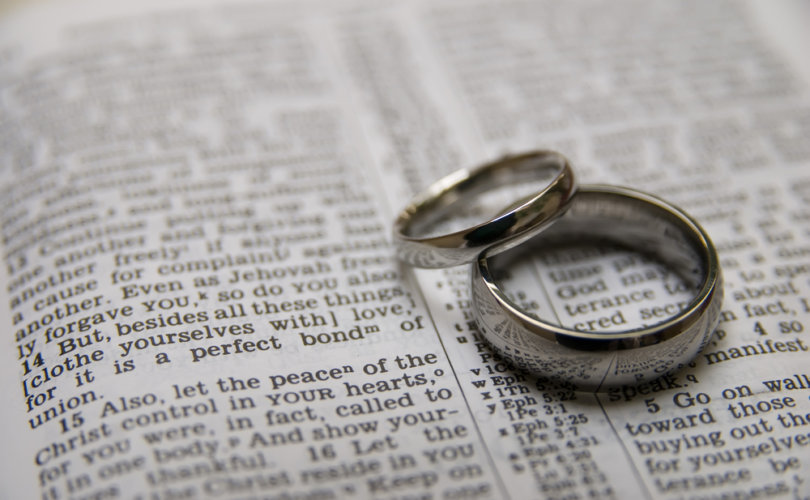 April 12, 2016 (Cardinal Newman Society) — Catholic colleges and universities must gather their courage and defend their Catholic identity and mission from cultural and legal challenges to the Church’s teachings on the nature and truth about marriage, and on sexuality and gender as well, according to Diocese of Phoenix Bishop Thomas Olmsted.

“I think it is very important that we learn how to present the teaching about femininity, masculinity and marriage in as persuasive a way as possible,” he said in an interview with the Newman Guide-recommended Thomas Aquinas College in Santa Paula, Calif. “I think we need always to make an effort to do that because the truth has power within itself. It does not depend on our energy or on anything else; we must simply have the courage to say the truth. It has its own inner power.”

“In the coming years, our institutions — and we personally — will be challenged on these things,” Bishop Olmsted added, noting the tough road ahead for Catholic education when it comes to defending its beliefs on marriage, gender and sexuality.

In February, The Cardinal Newman Society joined dozens of religious and public policy organizations, urging the U.S. House of Representatives to pass the First Amendment Defense Act (FADA) in order to “prohibit federal government discrimination against those who continue to believe that marriage is between one man and one woman.” Similar legislation at the state level has been a contentious topic in recent weeks resulting in some governors vetoing religious protection bills. Yet with the survival of Catholic education and faithful nonprofits, like the Newman Society, dependent on such protections, conflict over religious freedom protections and legislation is sure to continue.

“It is becoming apparent that some who promote marriage redefinition do not support the coexistence and tolerance of different ideas in a pluralistic society but instead have a ‘comply or else’ agenda,” the U.S.Conference of Catholic Bishops (USCCB) noted in its statement strongly supporting FADA legislation last June.

The need for FADA reflects a U.S. Supreme Court exchange when the same-sex marriage cases were being argued last year, according to the USCCB. When asked whether religious schools could lose their tax-exempt status for opposing same-sex marriage, the Solicitor General of the United States acknowledged that that scenario is “certainly going to be an issue.” While FADA was introduced to the House last June, it still has not been voted upon.

But Catholic colleges and schools should prepare themselves to defend their belief in marriage as between one man and one woman, as well as their belief that sexual identity is determined at birth, as both could soon be challenged, Bishop Olmsted noted in his interview.

“We don’t know exactly how that will happen, or how it will come. But I think we need to be wise, and just continue to present things as they are,” he said. “What we should talk about is not homosexual marriage, because there really is no such thing. That’s a misnomer. What we should talk about is God’s plan for marriage and the re-definition of marriage which is really a falsification of it. You cannot redefine what God gave us. It is a reality; we did not create it.”

The Newman Society reached out to Bishop Olmsted’s office to ask how Catholic colleges could better educate their students on issues of marriage and sexuality.

“The truth of marriage seems to be a sticking point throughout history,” Mike Phelan, Director of the Marriage and Respect Life Office for the Diocese of Phoenix, told the Newman Society. “The Church herself, her saints and teachings, have been called upon in other periods to stand fast for marriage when no one else seems to find a voice.”

Now it is time for Catholic colleges to be that voice, he said. “Our Catholic Universities, as the centers for the exploration and proliferation of truth in our time, have a tremendous duty to the society now to be a prophetic voice [stating] that marriage is an institution for a man and woman, for life, for children, for service,” Phelan explained.

But Catholic colleges must first stress chastity in their policies, practices and campus culture, as this will, in a small way, signify their dedication to the truth, he noted.

“Having sex-specific dormitories is an excellent first step, and it was encouraging to see Catholic University [of America in Washington, D.C.,] courageously make this policy change,” Phelan said. “This is an indicator, however simple, of the truth, goodness and beauty of the sexual difference and part of an ethos of chastity on campus.”

Of course, there are other forces that could potentially undermine the chastity of college students. As such, Catholic colleges should seriously contemplate their role in cultivating faithful and healthy marriages, Phelan added.

“They should ask the question: ‘Is four years in our university culture preparing our young people well for their vocation in the Church? Are they better prepared to make a gift of themselves in freedom to love within marriage or the call to celibacy for the Kingdom?’” he said. If the answer is no or one of uncertainty, then colleges need to purposefully “counteract the culture so formed by the Sexual Revolution,” Phelan explained.

Catholic colleges set themselves apart precisely because they are Catholic, he continued. It is their beliefs and faithfulness to those beliefs that can and should make up the core of university life. And this should be no different when it comes to marriage and sexuality. “Our universities have throughout history been different, places of challenge and truth,” Phelan said. “This is one area now where fearless culture change is needed.”