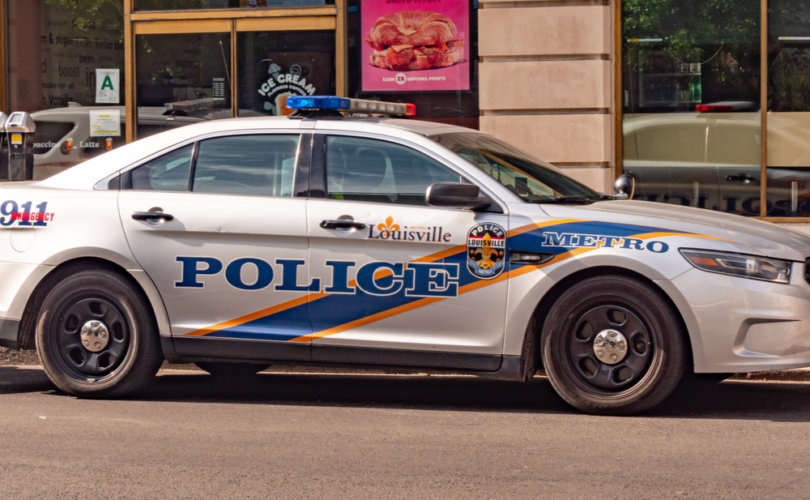 LOUISVILLE, Kentucky (LifeSiteNews) — A Louisville, Kentucky, cop has won a $75,000 settlement against the city after he was suspended from his job last year for praying outside an abortion facility.

The officer had filed a federal lawsuit against the city of Louisville and the Louisville Metro Police Department last year arguing they had violated his constitutional rights when they placed him on leave without pay for four months.

The city agreed to a settlement in December and sent a check last week.

“The City’s quick offer of $75,000 shows the City knows it committed a significant and inexcusable violation of a loyal officer’s Constitutional rights,” said Matt Heffron, senior counsel for the Thomas More Society, a conservative legal group which represented the police officer.

Officer Matthew Schrenger filed a lawsuit against the city after he was placed on administrative leave over photographs showing him praying at an abortion clinic while off-duty.

Officer Matthew Schrenger, a pro-life Catholic police officer with the Louisville Metro Police Department, had gone with his father to pray the rosary outside the EMW Women’s Surgical Center abortion facility (the state’s only licensed abortion center) in the early morning of February 20, 2021.

Schrenger was off-duty at the time, and the abortion facility was still closed.

A 13-year veteran of the police force and a father of four, Schrenger was participating in the 40 Days for Life group, an international grassroots group devoted to ending legalized abortion through fasting and praying outside abortion clinics.

According to the Daily Wire, Schrenger began his regular patrol duty later that morning, but was soon “ordered to return to his division’s office” where he was informed he would be “placed on administrative leave with pay, meaning he was prohibited from making arrests, working cases, or working overtime hours.”

The officer was also “locked out of his work computers and relieved of his police vehicle.”

The Daily Wire noted that “[d]uring the months he was on administrative leave,” Schrenger, who has received multiple commendations during his more than a decade of service, “lost a substantial amount of pay, which he relies on to support his wife and four young children.”

A letter from the police department obtained last June by local Fox affiliate WDRB News stated that the department was concerned because “Schrenger wore his full uniform while participating in ‘protest activity,’ but acknowledged that he attempted to cover it up with his coat,” the Catholic News Agency reported.

Surveillance footage released in March from the abortion clinic showed Schrenger arriving in his police cruiser before 6 a.m. on February 20, donning a jacket to cover his uniform, and praying outside the facility for about 45 minutes. At one point he also held up a sign which read, “pray to end abortion.”

A Louisville police officer has returned to duty after being placed on leave for 4 months. So what led to Officer Matthew Schrenger’s forced leave? He simply prayed outside the Louisville abortion clinic while off-duty.
More here: https://t.co/tuh6nVfxEg pic.twitter.com/6gSQpCCA0W

In October, the Thomas More Society, along with Louisville attorney Blaine Blood, filed a federal lawsuit on behalf of Schrenger against both the city and the police department, arguing that the law enforcement officer’s civil and constitutional rights had been violated when he was stripped of his duties and cut off from his income.

“A quiet, off-duty prayer, on a public sidewalk, resulted in Schrenger being immediately suspended for over four months, stripped of his police powers, and placed under investigation,” the complaint stated.

Matt Heffron, Schrenger’s attorney, said the city’s treatment of the officer was “unfair” and an instance of “discrimination,” calling Schrenger’s suspension “a significant and inexcusable violation of a loyal officer’s Constitutional rights.”

“The unfair discipline revealed undeniably content-based discrimination against Officer Schrenger’s personal pro-life views and violated his First Amendment rights,” Heffron said, adding that the Catholic cop “did not engage in any political protest on duty” but merely “prayed quietly.”

According to Heffron and the Thomas More Society, the police department’s actions against Schrenger appeared to be targeted against his religious beliefs and political views since the department had not “taken disciplinary action against on-duty, uniformed officers who marched with Black Lives Matter protestors and in LBGT parades.”

According to Heffron, Officer Schrenger “was treated very differently than other officers who had undeniably engaged in true political protest and activism while participating in LGBT and Black Lives Matter demonstrations.”

The Thomas More Society has stated that per its investigations, officers with the department who engaged in protests affiliated with left-wing causes have “suffered no suspension, and, in fact, no discipline whatsoever.”

Thomas More Society attorneys sent an open-records request to LMPD and confirmed that the department had not taken disciplinary action against on-duty, uniformed officers who marched with #BlackLivesMatter protestors or in #LGBTQ parades:https://t.co/KShyOj2kvn