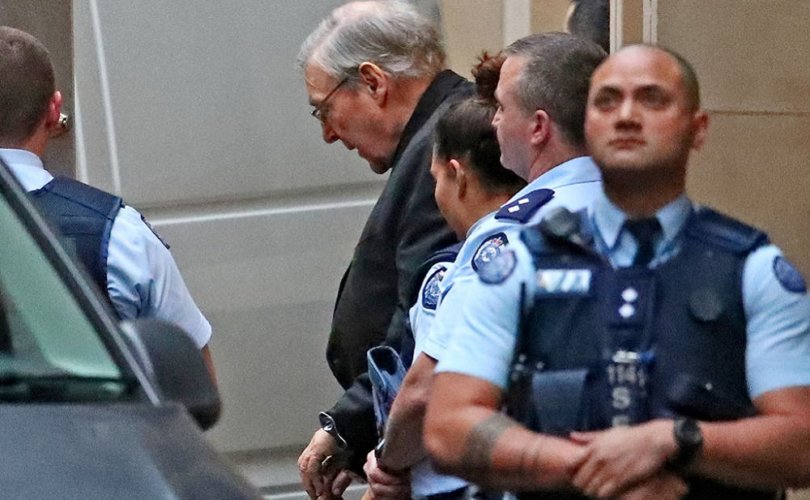 December 9, 2019 (LifeSiteNews) — A Catholic deacon based in England has urged supporters of Cardinal Geroge Pell to send him a Christmas card.

You must address him as George Pell on the envelope, but in the letter “His Eminence” will be accepted by the authorities.

DO NOT address his envelope as 'Cardinal Pell' or it will be refused pic.twitter.com/jsKxvBNofb

Cardinal Pell was imprisoned in Australia earlier this year for alleged historic child sex offences. Cardinal Pell has always denied the allegations and is expected to appeal them next year.

The UK-based Mail Online has reported on Deacon Donnelly’s tweet in support of Cardinal Pell, describing it as “bizarre”.

That visit was strongly criticised by Victorian state premier Daniel Andrews (the senior political figure in the state where Cardinal Pell is imprisoned), describing Abbott’s visit as “shameful” and apologising on Mr Abbott’s behalf to “every victim who would have found it traumatising to see the former Prime Minister of our country visiting a convicted child sex offender”. Mr Abbott responded to criticism by saying he was “simply visiting a friend”.

Neither the report in the Mail Online nor Mr Andrews in his condemnation of Mr Abbott’s visit acknowledges the possibility that some members of the public may consider Cardinal Pell the victim of a miscarriage of justice.

Andrew Bolt, an Australian TV host for Sky News Australia, has defended Mr Abbott for the visit and said that what was “truly shameful” about the event is that what was meant to be a private visit was leaked to the media. In an article in the Herald Sun, Mr Bolt said:

Here was Abbott, the former Prime Minister, visiting someone who’s been a friend for decades and is now in the deepest need.

He was visiting a man who Abbott — like me — is convinced is innocent, and who he hopes will win his appeal to the High Court against his conviction for abusing two choirboys, one of whom actually denied being abused.

Mr Bolt also spoke in defence of both Cardinal Pell and Mr Abbott on his Sky News Australia programme “The Bolt Report”.

Mr Bolt, though himself an agnostic, reminded his viewers of Christ’s words in the Gospel of Saint Matthew: