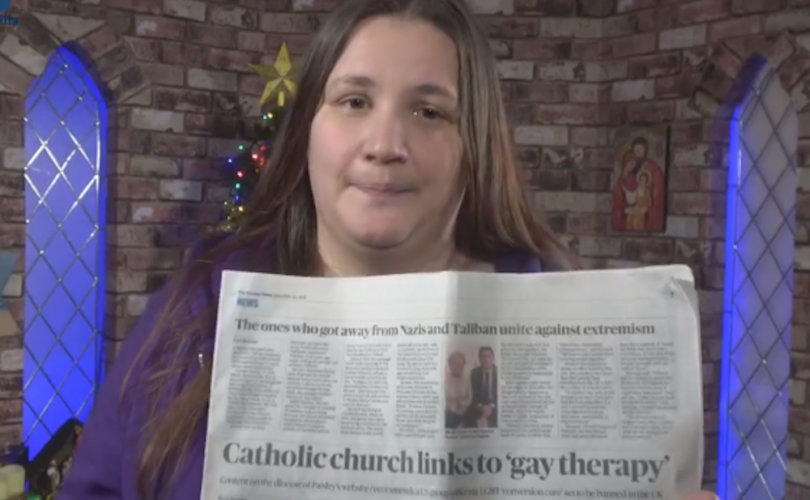 PAISLEY, Scotland, December 19, 2018 (LifeSiteNews) ― A Catholic diocese was attacked by UK media shortly after it established a chapter of an international support group for Catholics with same-sex attractions.

Courage, founded by Father John F. Harvey of Philadelphia, is a fellowship group for Catholics who experience same-sex attractions and wish to remain chaste. Bishop John Keenan of the Diocese of Paisley in Scotland green-lighted the northern nation’s first Courage group after requests from Catholics with and without same-sex attractions.

On December 17, the London Times accused the Catholic Church in Scotland of “promoting a group involved in conversion therapy.” It stated that the Roman Catholic Diocese of Paisley had angered LGBT activists by including material about Courage on its website and by linking to an American pamphlet for Catholic parents of same-sex-attracted children that made reference to “therapeutic interventions.”

Elena Feick, a Scottish-Canadian who describes herself as “a Catholic with same-sex attraction,” defended Paisley’s Courage group through social media, stressing that her “Courage family” is not involved in reparative therapy.

“Courage International does not require, refer for, or provide any form of reparative or conversion therapy,” she said.

Regarding the controversial American pamphlet, Feick said there are a number of links, but these are “external,” for “informational purposes” and “not used within the Courage chapter.”

Feick told LifeSiteNews that the first Courage group in Scotland began after she had several meetings with Bishop Keenan. She stressed, however, that she is not an official Courage spokeswoman, but just a member.

“We’ve got a good-sized group now,” she said, “but it includes all of (Scotland’s dioceses) except St. Andrews and Edinburgh.”

Currently, every Scottish Catholic diocese has a chaplain ready to serve would-be Courage members. Privacy and security is important and so membership is by “invite only.” Only a chaplain can introduce a new member to a Courage group, and times and locations of meetings are not made public.

The reasons for this are twofold. First, anonymity is important, as people do not necessarily want to make public that they have same-sex attractions. Second, LGBT activists to not take kindly to Catholic ministries that encourage the same-sex attracted to live chaste lives, and people involved in Courage are nervous.

“We saw what happened to Father Morris, who was run out of his own parish,” Feick said.

Father Mark Morris had to go into hiding temporarily after he was dismissed by the University of Strathclyde as its Catholic chaplain in July. Morris raised the ire of  LGBT activists, including a fellow priest, by advertising on his parish website a rosary of reparation for sins committed at Glasgow Pride.

But why would LGBT activists harass people who themselves have same-sex attractions?

“Because the LGBT activists don’t like the idea of same-sex-attracted people being called to chastity, which to most of us means celibacy,” Feick replied. “LGBT activists definitely do not like Courage.”

Feick acknowledged that Courage International has been wrongly accused of offering reparative therapy before. However, she underscored that in Courage “you don’t have to change your experience of attraction.”

Feelings of attraction are not sins, she added.

Feick acknowledged that some people do report having changed their sexual orientation and said Courage’s stance on the issue is “a tricky line to toe.”

“Some can (change orientation), some can’t,” she said.

The Five Goals of Courage, which are discussed at meetings, contain nothing about reparative therapy. They are as follows:

Before the Paisley group was started, Feick belonged to an unofficial online Courage group. However, it didn’t go well because there was no chaplain, she believes.

“Not to be clericalist, but we need the priest!” she said.

The chaplain is necessary because he hears confessions for the group, he has experience in living celibate chastity in a healthy way, and everyone needs a good father figure, she added.

Although the Paisley group would welcome people from other Christian denominations, the focus on the Five Goals, and the opportunity for confession at every meeting, make it “a very Catholic group,” Feick said. She also observed that though they hope to have four groups in Scotland in 2019, for now Courage is located in just one location.

“Right now, we’re mixed gender,” Feick said. “Hopefully, in the future, we will have a men’s group and a women’s group.”

Bishop Keenan told LifeSiteNews that he had been approached by both people who wanted to start a Courage group and Catholics who are not same-sex attracted who hoped the Church could help people with same-sex attractions.

“It was always a good thing to do,” he said.

Keenan himself has been to the diocesan Courage meetings.

“They were really great,” he said, describing the reflections, fellowship, and sharing of pizza. “The people who came along had a wonderful time.”

The bishop doesn’t want to focus on the negative attention the diocese has received for starting a Courage group.

To join a Courage group, would-be members should contact the Courage chaplain for their diocese. Adult Scottish Catholics with same-sex attractions may write to [email protected]

Meanwhile, if Feick looks familiar, you may remember her from an earlier video. She was one of the Scottish Catholics who staged a living nativity to protest a shopping center’s refusal to host a manger scene. She played the Blessed Virgin Mary.