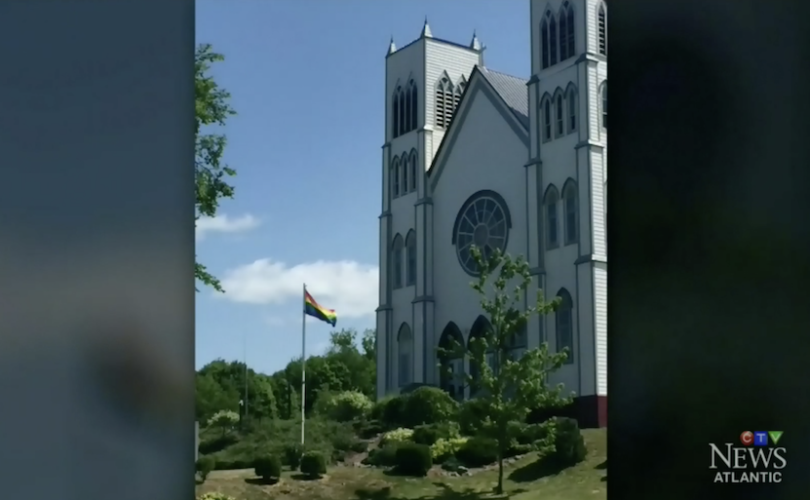 The priest’s action was prominently featured in local and regional news.

Diocesan chancellor Jennifer Wadden said the bishop was away at the World Meeting of Families, and is not scheduled to return until September 10.

That Vatican event in Dublin stirred controversy for its promoting homosexuality and transgenderism.

Father Peter McLeod of St. Joseph’s Parish in Little Bras d’Or, a small community on Cape Breton Island, says he flew the rainbow flag to show his parish was inclusive.

“There was a time one kid said to me, ‘why does the church hate gay people?’ When you hear something like that it hits you to the core,” he told Cape Breton Post.

“You get these people who profess to be the real Christians and what they are saying (about the LGBTQ community) is anything but Christian … change can happen when people speak up.”

“I’ve seen the effects of the bigotry and prejudice against some of these people, especially younger people. It’s a painful thing to see,” he told CTV News Atlantic.

“Over the centuries, there has been a lot of pain meted out to members of the LGBTQ community,” added McLeod. “That’s something as time will unfold, we will probably have to recant for.”

Bishop Dunn was apprehensive because this was a new thing, McLeod told CTV Atlantic. He also said the experience was generally positive, and he’s considering doing it again next year.

McLeod did not return multiple requests for comment from LifeSiteNews.

St. Joseph’s Parish is also on the Canada Summer Job database as approved for a summer job grant, which means whoever applied on behalf of the parish signed the attestation supporting abortion and transgender “rights,” whether realizing the implications or not.

LifeSiteNews contacted St. Joseph’s to confirm that the parish had applied, and to ask if the attestation was signed in error and the grants cancelled, but calls and email were not answered.

Chancellor Wadden said she could not speak on behalf of the diocese and any comment on the homosexual flag and the attestation would have to come from Bishop Dunn.

The St. Joseph “pride” flag-flying incident and indeed, the World Meeting of Families, come as the Catholic Church is reeling over allegations of a predatory homosexual culture pervading not only some seminaries from Honduras to New York but the hierarchy itself.

This summer, revelations about now-disgraced ex-Cardinal Theodore McCarrick and his pederastic proclivities surfaced, and a damning Pennsylvania grand jury report on sexual abuse and cover-up implicated six dioceses in that state.

The Diocese of Antigonish itself was rocked by a similar scandal when Bishop Raymond Lahey, Dunn’s immediate predecessor, resigned after he was arrested for possession of child pornography in September 2009, just a month after he reached an $18 million settlement with abuse victims in the diocese.

Lahey told the court in his 2011 trial he was a homosexual and hoped to return to his male lover of 10 years when released from jail. In 2012, Pope Benedict XVI stripped Lahey of all his priestly rights and duties, though he remains obligated to be celibate.

LifeSiteNews editor-in-chief John-Henry Westen noted then the Lahey scandal clearly showed “the need for effective action by fellow clergy when they have knowledge of grave scandalous actions by their brother priests or even their bishops.”

“It defies reason to conclude that none of Lahey’s fellow clerics, and even brother bishops, knew that there were sexual problems,” Westen wrote. “There were likely more than a few who were aware that something was seriously amiss for a number of years.”

Meanwhile, Father James Martin, the American Jesuit known for LGBT advocacy, suggested in a speech at the World Meeting of Families that parishes invite active homosexual persons to do parish ministry, notably as Eucharistic ministers. The Vatican invited him to speak at that event.

Because of the focus on their immoral sexual activity, “LGBT people may feel they have to be dishonest about who they are and that they have no place in ministries,” Martin said, but they should be invited, “like everyone else in your parish who does not live up to the Gospels—which is everyone…”

Martin has made this argument before, perhaps unintentionally showing that the Church should not tolerate any sexual sins, whether they are homosexual or hetersexual.

McLeod made a strikingly similar point to the Cape Breton Post, pointing out Catholics shrug off premarital sex and divorce.

“Nobody seems to say anything about those, but they do seem to say things about the LGBTQ community. That’s a form of discrimination that needs to be addressed,” McLeod asserted.

“Wouldn’t it be good if we stopped trying to make moats around our church and try to create bridges today?” he told LifeSiteNews.

Certainly, he said, the bishop knew about the rainbow flag flying over one of his Catholic church during a homosexual festival, though MacGillivray couldn’t speak for “what was in his mind.”

“It’s pretty hard for, in a little diocese, for the bishop not to know exactly what’s going on,” he told LifeSiteNews.

“The pride flag in many ways has come to connotate an acceptance, an acceptance of people, and we need to be a church who accepts people,” MacGillivray said.

“The pride flag connotates inclusivity as a Church and not just as a Church, as people of the Gospel,” he added. “The Gospel’s all about inclusivity, you know, and as our pope, our wonderful pope is giving good leadership when it comes to these issues, that we have to be a Gospel about inclusivity.”

As for the possibility that a Catholic church flying the homosexual rainbow flag could cause scandal, MacGillivray pointed out, “Jesus talking at the well was considered to be a scandal too, wasn’t it?”

Anthony Esolen, a professor at Thomas More College who spends his summers in Cape Breton, responded by pointing out that Jesus “did not tell the woman that she was a wonderful person because she had five husbands, and the man she was living with was not her husband, did he?”

“Jesus was infinitely merciful with sinners, and merciless with sin. The flag is a sign of approval for the sin. Otherwise what can it possibly symbolize?” Esolen told LifeSiteNews in an email. “That the Church welcomes people who suffer temptations?  Everybody suffers temptations.”

Fr. MacGillivray also said he wasn’t aware of any complaints about the rainbow flag, but “I’m sure that there probably [were],” adding, “Just like there [were] complaints about Jesus’ ministry and they, look what they did to him. That’s what leadership sometimes is about.”

When it comes to leadership, Bishop Athanasius Schneider, an auxiliary bishop of Astana, Kazakhstan, has strong words on the subject.

“A Catholic bishop has the grave moral duty to raise his voice and take a stand regarding the phenomenon of ‘gay pride’ parades,” he said in a July 28 statement.

“We are witnessing an incredible scenario, in which some priests and even bishops and cardinals, without blushing, are already offering grains of incense to the idol of homosexuality or gender ideology,” Schneider noted.

“Then one must also proclaim the Divine truth about the gravely sinful character of homosexual acts and of the homosexual lifestyle, since they are offensive to God’s will,” Schneider observed.

“One must proclaim with truly fraternal concern the Divine truth about the danger of the eternal loss of the souls of practicing and unrepentant homosexuals.”