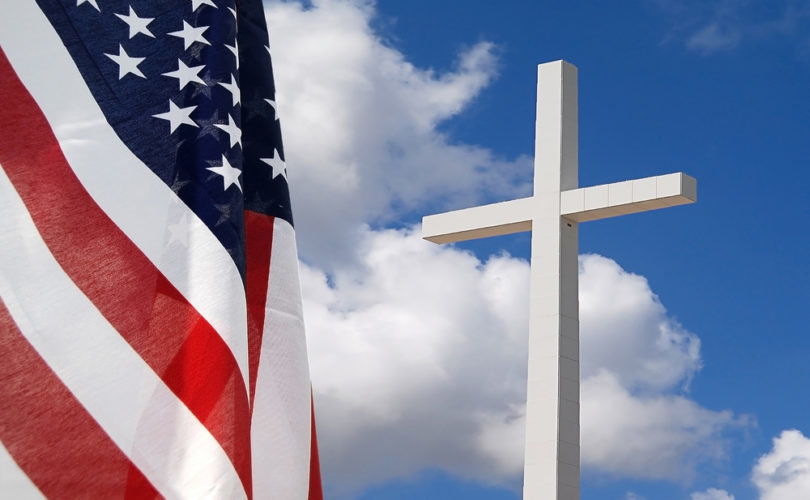 January 6, 2016 (CardinalNewmanSociety) — The anti-Catholic Blaine Amendments and HHS contraception mandate have bookended a 150-year attack on Catholic education and religious freedom and should be overturned immediately so that Catholic universities, colleges and schools can operate according to their mission and the freedoms insured by the U.S. Constitution, said Ave Maria University President Jim Towey in a recent interview with The Cardinal Newman Society.

“This is a struggle that’s gone on for thousands of years, but for our democracy it’s particularly acute in that we’ve had this history with the Blaine Amendments, with anti-Catholic discrimination, that goes on to this day with the example of the ‘HHS Mandate,’” Towey said.

The anti-Catholic Blaine Amendments — currently found in 37 state constitutions — became popular in the 19th century to prohibit Catholic, or “sectarian” schools, from receiving government aid. The laws continue to impinge upon school choice, block support for vouchers and tax credits, threaten religious freedom and prevent any funding that could eventually benefit Catholic schools, families and students.

“One of the reasons Ave Maria University raced to court,” Towey continued, “was because we knew that the Obamacare’s contraceptive mandate was an attack on our religious freedom, and without that you can’t be a Catholic university.”

Supporters of faithful Catholic education will be monitoring the ongoing religious freedom challenges to the HHS Mandate, which the U.S. Supreme Court is set to rule on in the upcoming term. The impending Supreme Court decision will influence not only the Little Sisters of the Poor and religious-based organizations, but also Catholic universities, colleges and schools across the country.

The Supreme Court could also decide as early as this month whether it will hear a school choice case involving Colorado’s discriminatory Blaine Amendment. It’s possible that Justices could invalidate Blaine Amendments across the country when deciding the case.

“The government could have exempted faith-based organizations, but they didn’t want to do it,” said Towey about the HHS Mandate. “They only exempted churches, and it was a very narrow and pernicious initiative by the administration to attack people of faith and that’s why it’s now going to have to be settled by the Supreme Court.”

And it is astonishing to see how a history of religious bigotry and anti-Catholic discrimination can be so easily swept under the rug, especially in a culture so alert to claims of discrimination, said Towey.

“You see at Yale these plans to purge their history by trying to remove statues of former slave owners and so forth, but they’re completely comfortable with these Blaine Amendments staying on the books of states when they are nothing but born of religious bigotry and anti-Catholic fervor,” he said, referencing resurfacing debates at Yale over a dormitory named after prominent 19th century slave owner John C. Calhoun.

“But where’s the outcry from these individuals so concerned about past history?” he asked. “That just shows the force of the secular orthodoxy and how it’s destroying faith-based institutions.”

Even a century later, the impact of the Blaine Amendments has not waned. After former Speaker of the House and U.S. Secretary of State James G. Blaine failed to amend the U.S. Constitution, versions of the amendment were “added to state constitutions in order to enforce the nativist bigotry of the day” against Catholics, according to The Beckett Fund for Religious Liberty.

“The influence of Blaine is still being felt 150 years later,” Towey told the Newman Society. “Unfortunately, it was the price of admission for some states to even enter the union. They had to have Blaine language in their state constitutions.”

“Everybody kind of rolled their eyes and thought ‘oh, that’s harmless,’” he said. “It’s not harmless. When I worked in the White House in the faith-based office for President Bush, I saw how many faith-based providers of social services were being harassed by interpretations of the Blaine Amendments or their applications.”

The applications of the Blaine Amendments have reached even further in recent years, said Towey. In some instances, it affected faith-based hiring and whether a Catholic organization could hire people that supported the Catholic faith rather than attacked it.

While religious freedom issues have taken on added weight in light of the HHS Mandate, it is nothing new to Catholics in the United States, Towey told the Newman Society.

“The bishops when they started the Fortnight of Freedom movement were reminding Catholics of our history,” a history of fighting to protect religious freedom, he said.

The Blaine Amendments were born of religious bigotry and anti-Catholic discrimination and should be repealed out of the state constitutions, he continued.

For some, the anti-religious freedom sentiments were born out of ignorance. For others, it was the common agenda of the day. “Historically, when it happened,” Towey said, “you had a political demagogue who was wanting to be president of the United States — does that ring a bell?”

It is also important to remember that the Church has called on all people of good faith to protect religious freedom, Towey told the Newman Society.

Dignitatis Humanae, the Church’s declaration on religious freedom issued by Blessed Pope Paul VI in December 1965, “is a reminder of our need to protect our religious freedom or risk losing it,” he said. “Even though it is written for the universal Church, it has a very particular application in a country like ours that has a First Amendment and a guarantee of the free exercise of religion.”

The document came out at a time of great concern for Catholic universities and religious freedom and paid special attention to education, said Towey.

The family, since it is a society in its own original right, has the right freely to live its own domestic religious life under the guidance of parents. Parents, moreover, have the right to determine, in accordance with their own religious beliefs, the kind of religious education that their children are to receive. Government, in consequence, must acknowledge the right of parents to make a genuinely free choice of schools and of other means of education, and the use of this freedom of choice is not to be made a reason for imposing unjust burdens on parents, whether directly or indirectly.

“The importance of this document is in its timeless appeal to all people of good faith to protect religious liberty and to oppose coercion and the indoctrination that the secular orthodoxy imposes on people of faith,” Towey said. “Dignitatis Humanae came and spoke about the right of Catholics to be in the public square and the fact that without religious liberty a lot of the other rights that are secured under the Constitution are meaningless — what good is Freedom of Speech if you can’t practice your faith?”

1
Pope Francis breaks silence on Roe reversal, criticizes denying Communion to pro-abortion politicians
2
Pope Francis bans priest who publicly challenged him from all public ministry
3
Abp. Viganò: ‘Pride’ movement is satanic, must be conquered by ‘reparation,’ charity
4
Dr. Jordan Peterson promotes homosexual ‘marriage’ and parenting in interview with Dave Rubin
5
Why did the Vatican issue such a joyless statement in response to the overturning of Roe v. Wade?
Subscribe to Daily Headlines »