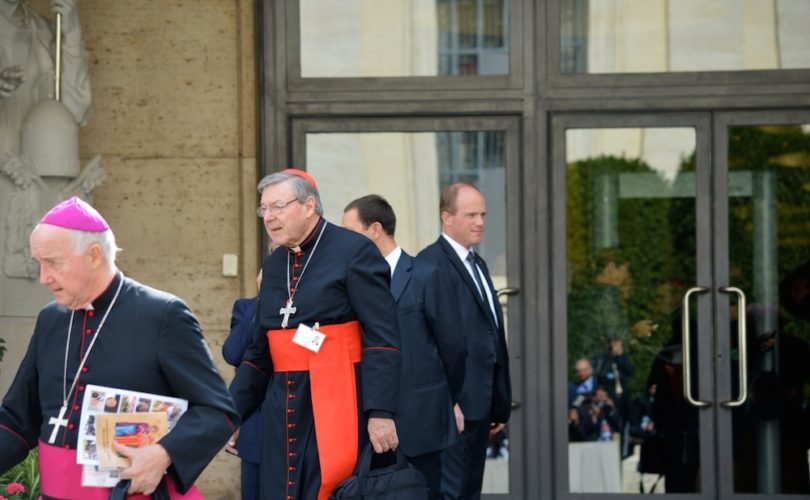 BIRMINGHAM, Alabama, November 2, 2017 (LifeSiteNews) — The Catholic Church is in crisis of authority under Pope Francis, with major figures like Cardinal Robert Sarah subjected to “stinging” papal rebukes and curial power plays, and dissatisfied Catholics positioning themselves to manipulate synods to change Church teaching.

That’s according to an analysis by EWTN’s Papal Posse, which last Thursday galloped through a number of recent developments in the Catholic world during their featured weekly appearance on Raymond Arroyo’s The World Over Live.

Robert Royal, editor-in-chief of The Catholic Thing, and canon lawyer Fr. Gerald Murray agreed Pope Francis’ public correction of Vatican liturgy chief Sarah will still lead to questions over who has final authority to approve translations of liturgical texts in the Roman rite from Latin to the vernacular.

The rebuke is significant in light of the pope’s “relationship with Cardinal Sarah,” Royal noted, pointing out that Francis “has seemed to be very sensitive” in the past about what Sarah has said.

Notably, Sarah’s recommendation that priests say Mass “ad orientem,” or facing the altar, was quickly dismissed by the Vatican as of no force.

Murray blasted the Roman curia for evidently leaking the pope’s correction of Sarah to the media before the cardinal had time to act on it.

“For (Cardinal Sarah) to be in this power move, let’s say, where he’s being leaked on … meaning that people are taking stuff that’s private and putting it out in the public forum, this is not a Christian way of treating him,” Murray said.

“That’s the kind of infighting in the Roman curia that Pope Francis was elected to get rid of, and it’s unfortunate, in my opinion, that Cardinal Sarah is being marginalized.”

Royal and Murray also agreed that it was odd but typical that the pope did not consult with Sarah, whom he appointed head of the Prefect of the Congregation for Divine Worship and the Discipline of the Sacraments, before issuing his motu proprio Magnum Principium in September.

The document changes the norms for liturgical translation and shifts the initiative for translations from the Vatican to local bishops’ conferences, but isn’t clear on the extent of Rome’s power of review.

In a private letter to the pope, and in a commentary sent to several key Vatican officials, Sarah interpreted the document as leaving intact the Holy See’s authority over liturgical translations, as was affirmed and set out in John Paul II’s Liturgiam authenticam, explained Murray.

Pope Francis rejected Sarah’s interpretation in a letter in which he stated his motu proprio “abrogated” sections of Liturgiam authenticam, which calls for a literal translation of the Latin.

“Abrogated” is canonical language for “no longer having the force of law,” Murray said.

“That’s most unusual from a canonical point of view in that a private letter is now a legal instrument to change a previous document.”

At “the heart of the dispute” is that the pope “is saying is that the level Roman involvement in ensuring the fidelity of the local translations to the original Latin” has “been diminished,” Murray said.

Murray and Royal agreed this could lead, as Arroyo suggested, to “individual bishops’ conferences engaging in all versions of the liturgy.”

And that could cause “huge damage,” said Murray, notably because “so-called inclusive or non-sexist language is a preoccupation for a lot of people who have important roles in the life of the Church.”

There is “great pressure now through ideology to eliminate the word ‘man’ from the vocabulary in the English language,” he said.

“You cannot manipulate language for ideological purposes without doing harm to doctrinal content.”

Royal maintained the Vatican has to have final say on proposed translations.

Moreover, “there have been, as we know, battle royals, not only here in the United States but in Europe” over liturgical translations, Royal said.

“Some bishops’ conferences in Europe have still not gotten their modern translations approved.”

Arroyo also asked them to evaluate synods, including the “pan-Amazon” synod for 2019 the Holy Father announced in October, and the 2018 World Meeting of Families in Dublin.

There are signs the Amazon synod will be used to discuss married priests and possibly even women’s ordination, he said.

Meanwhile, the Irish bishops stirred controversy with a publication for the Dublin meeting displaying a picture of two women hugging along with a text that the Church accompany such couples.

Murray described this a “really horrifying” and “subversion,” and pointed out “same-sex marriage” is a myth and a creation of the state.

“People get together to do a lot of things,” he said.

“Certainly when they get together to commit mortal sin, which is what homosexuality involves, we can’t say that this is something that the Church needs to accompany in the sense of fostering it.”

Synods “become these pressure moments where dissatisfied groups who want to change Church teaching get take hold of the mechanism and then start pushing things that are against Christianity,” Murray added.

“This is a real crisis that’s unfolding in the life of the church,” he said. “The World Meeting of Families should be about that, families, not about homosexuality.”