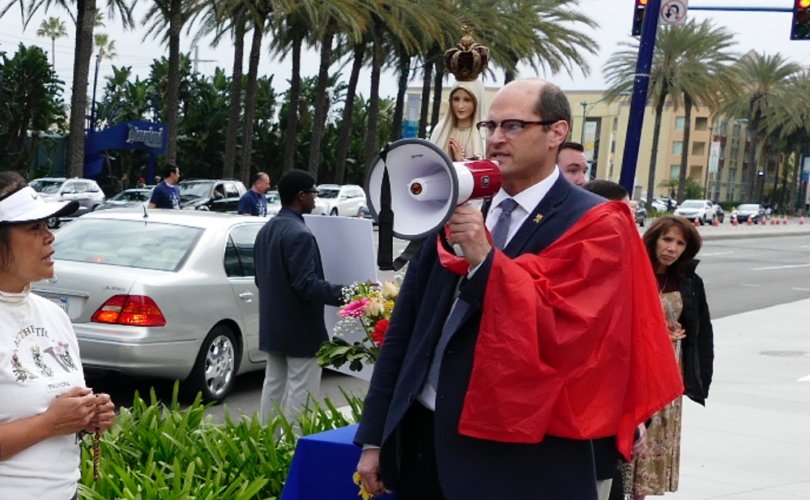 LOS ANGELES, California, April 5, 2019 (LifeSiteNews) – It’s important for Catholics to have a presence and make a statement in support of the faith at occasions such as the recent Los Angeles Religious Education Congress (LA REC), a representative of an organization for lay Catholics says.

This is true even if the fruits of the effort are not immediately known, he said, and God will handle the rest.

The LA REC has secured a reputation over the years for giving a platform to dissident speakers and for liturgical novelty, and since some of what is presented there conflicts with the Catholic faith, Michael Whitcraft says it’s essential for Catholics to speak out for a number of reasons.

Whitcraft and the American Society for the Defense of Tradition, Family and Property (TFP) held a prayer protest as the REC took place at the Anaheim Convention Center late last month.

Catholics have regularly expressed concern over the event billed as the largest religious education gathering in the U.S., and still the REC continues on as it has, presenting these concerning elements.

Given this, Catholics likewise must continue to voice their concerns over the event, Whitcraft told LifeSiteNews.

“I think what is necessary is that Catholics who are 'in the know' voice their opposition,” he said. “That is why our protest was so important.”

“First of all,” he said, “it alerted members of the public who were driving or passing by.”

“More importantly,” Whitcraft said, “those who participated in or saw our rally will be more likely to investigate and talk about what takes place at the congress. One of the goals of our protest was to generate discussion among the faithful.”

Whitcraft, TFP’s Southern California Representative, along with other TFP members and Catholics, responded to TFP’s call to protest. They prayed the rosary, invoking Our Lady of Fatima, distributed fliers to attendees and passersby, and displayed signs with messages objecting to the confusion generated by some presenters and other aspects of the massive religious education gathering.

“The demonstration was necessary for three reasons,” Whitcraft said. “First and most important, to make an act of reparation to God for the offense he is given by those dissident speakers at the congress who are misrepresenting his teachings and, thus, endangering souls.”

It was also important to alert the public and those attending the REC about the dangers to the faith present at the event, he said.

And lastly, said Whitcraft, “To voice our opposition, thus letting those dissidents present and the archdiocese know that faithful Catholics are fed up with their faith being distorted and will no longer remain silent.”

This year’s event was especially concerning. Retired Los Angeles Archbishop Cardinal Roger Mahony was among the presenters. He has a controversial history of covering up clergy sexual abuse cases in the archdiocese.

The Los Angeles archdiocese sponsors the event, but it takes place in the neighboring Diocese of Orange.

LifeSiteNews delivered two petitions to the archdiocese’s office in Los Angeles on the morning of the REC’s opening day, opposing Mahony’s appearance the following day. LifeSite’s petition contained more than 5,800 names; a companion petition from the Ruth Institute had more than 4,300.

Whitcraft told LifeSiteNews that it’s extremely difficult to bring those who are on board with the radical errors presented by some REC speakers back to orthodoxy, but this doesn’t mean Catholics should not act.

“I think the best we can do is to pray for them, but also to voice our opposition in a very firm, yet charitable way,” he said. “I firmly believe that this is our best way to awaken their consciences and bring them back to the straight and narrow.”

Some three-dozen people took part in TFP’s rosary protest of the LA REC. Those numbers are actually on the low side for events like this presented by the group. Typically with the large number of Catholics in southern California, Whitcraft explained, he would expect easily over 50 attendees. The REC demonstration, however, was running concurrently that day with TFP’s national St. Joseph Crusade for Traditional Marriage.

So there were Catholics praying elsewhere for that initiative, which is also a good thing.

Even with a light turnout, Whitcraft told LifeSiteNews, TFP was able to distribute 1,500 educational flyers at the REC.

Whitcraft, who had known about the problems with the LA REC since he first moved to southern California in 2010, came on his own to demonstrate last year.

He knew several people that would protest each year, he said, but he’d not been able to join them in the past. Last year his schedule prohibited him from being able to organize a demonstration, so he came alone, without having even scoped out the area ahead of time.

While there, he said, he realized better the importance and the size of the event, as well as the logistics of what went on and where it happened, information that proved invaluable for organizing the protest this year.

“I would like to tip my hat to those who have followed the event for far longer than I have and who have yearly faced the crowds to hold up the standard of Catholic Orthodoxy there,” Whitcraft told LifeSiteNews. “I hope to continue to join forces with these courageous Catholics in the future.”

It’s not about how many people come to demonstrate, he said, rather, the important thing is standing for the Catholic faith.

“I consider it a success whenever we are able to go out into the public and stand up for the faith,” stated Whitcraft. “Today, people put a lot of emphasis on numbers, whereas I find it much more important to have simply gone out and done something.”

The Lord will take care of things, he added, we just have to show up.

“There were only three faithful standing at the foot of the cross and I feel they were very successful,” said Whitcraft. “Small numbers should never discourage people from doing something. When the numbers are small, it is our way of presenting Our Lord with a few loaves and fishes. It is very simple for Him to multiply our efforts.”