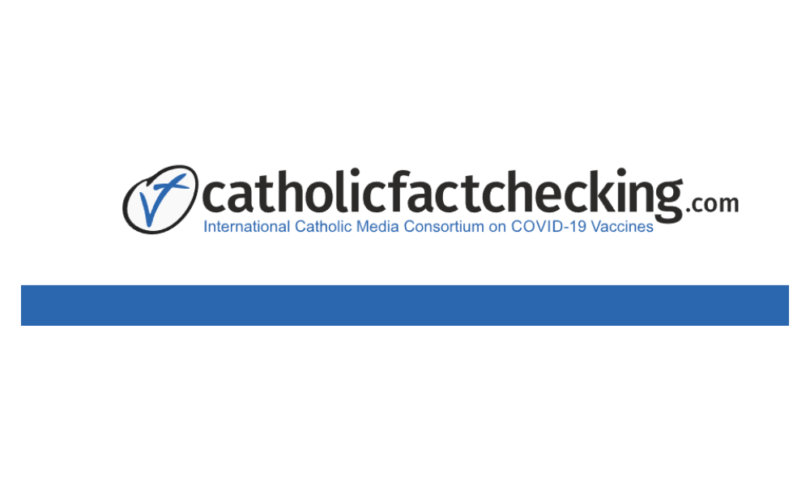 (LifeSiteNews) — A Catholic “fact-checking” group which clarifies “fake news and misleading information about vaccines against COVID-19” and defends the abortion-tainted injections, receives funding from Google and is linked to Bill Gates, George Soros, and the Pontifical Academy for Life.

The recently formed organization catholic-factchecking.com, also known as the International Catholic Media Consortium on Covid-19 Vaccines, has the aim to “clarify fake news and misleading information about vaccines against COVID-19.”

To achieve this, as noted by Church Militant, the group is comprised of an “international consortium of Catholic media, news agencies and world-renowned scientists.”

The consortium seeks to respond to the “many scientific and ethical questions” which are being raised “regarding the ethical character of the process of producing the vaccines.”

“These issues need to be clarified or explained by scientists, bioethicists, and theologians,” the group adds.

The Consortium defends the use of the abortion-tainted COVID jabs, attacks natural immunity, and criticizes the concept of seeking a religious exemption to jab mandates.

In turn, Eric Sammons, editor in chief of Crisis Magazine, soundly criticized the group as being “funded by Google to push the COVID vaccines (and silence opposing views).”

My response:
1) @CrisisMag will *never* be part of such a group.
2) Don’t buy my two OSV-published books.https://t.co/0tZ9OrLIIa

Its very existence is due thanks to funding from tech giant Google, which has a long history of censoring views which run contrary to the predominant narrative, particularly relating to COVID-19.

The Consortium reveals that it was one of eleven proposals (out of 309) chosen by the “the impartial jury of the COVID-19 Vaccine Counter-Misinformation Open Fund, granted by Google News Initiative.”

The Google News Initiative has set aside $3 million to “support additional debunking efforts” to combat “falsehoods” found online regarding the COVID-19 injections.

A jury of 14 people chose the 11 winning proposals, which included employees from Google, Christian Medical College, the World Health Organization, the International Fact-Checking Network, and Vaccinate Your Family.

Announcing the 11 winners, Google wrote: “Aleteia, I.Media and Verificat.cat will work with a scientific committee and two research centers to source misinformation and create a database of related fact checks available in seven languages for Catholic media outlets around the world.”

The $3 million in funding is to be divided between the 11 groups. The Consortium didn’t indicate how much it had received.

Among the seven founding media organizations, the Consortium counts prominent U.S. publisher Our Sunday Visitor, which is “one of the largest Catholic publishers in the world.”

In order to combat the “fake news” about COVID jabs, the Consortium has assembled a scientific committee comprised of individual members as well as the Institute for Global Health (ISGlobal).

As noted, ISGlobal also received money from the Bill and Melinda Gates Foundation (BMGF), the brainchild of eugenicist and vaccine-promoter Bill Gates. Between October 2009 and November 2021, ISGlobal received a total of $66,324,863 from the BMGF.

Among its individual members, the Consortium’s scientific committee lists a number of Vatican officials. Monsignor Renzo Pegoraro, the chancellor of the Pontifical Academy for Life (PAV), which promotes abortion-tainted injections, is listed first.

Carrara recently attacked Vatican journalist Ed Pentin, after Pentin criticized the PAV’s promotion of COVID jabs for children, despite the growing reports of adverse events and deaths following the jab.

#fakenews As member of the Scientific Committee of https://t.co/BzQzJkzaza I’m on the same line as 👉
Annamaria Staiano, President of the Italian Society of Pediatrics: “All pediatric scientific communities are in favor of vaccination against #Covid in the age group 5-11 years” https://t.co/yb7FCCPcv1

Another member of the group is Jose Esparza, a former member of the BMGF for HIV vaccines, and a senior public health adviser at the pro-abortion World Health Organization.

LifeSiteNews contacted the Consortium with a number of questions, but received no response.