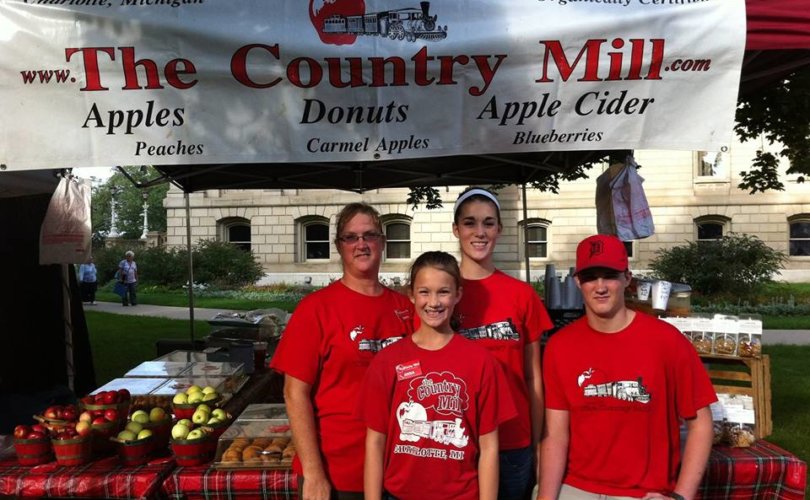 EAST LANSING, Michigan, June 1, 2017 (LifeSiteNews) – A Catholic organic farmer is suing the city of East Lansing for booting his business from the farmers' market over his belief that marriage is the union of one man and one woman.

Steve Tennes of Country Mill Farms has sold fruit and vegetables at the East Lansing Farmer’s Market for the past seven years. After city officials learned of his belief that marriage is a man-woman union, they bypassed jurisdictional limits under Michigan law to craft a policy to exclude him from being able to sell at the farmers' market.

The trouble for Tennes began when he posted on the Country Mill Farms' Facebook page about his belief that marriage is between a man and a woman. City officials reacted to the August 24, 2016 post by telling Tennes they didn't want his farm at the next scheduled market the following Sunday. They said they'd received complaints over the Facebook post and there would be protests if Country Mill Farms was there selling produce.

Tennes didn't back down, and participated in the market as he always had. No one showed up to protest.

Then, in December 2016, Tennes again posted about his beliefs on Facebook.

Country Mill Farms is in Charlotte, 22 miles outside of East Lansing. It's not in East Lansing's jurisdiction.

So, city officials created a new policy that all vendors must comply with East Lansing’s nondiscrimination laws not just while they are at the Farmer’s Market but in all of their general business practices.

Tennes sells fruit and vegetables to anyone. He says he employs people who identify as part of the “LGBT community.” But the city doesn't want him participating in the farmers' market unless he will agree to host same-sex “weddings” on his orchard.

East Lansing Mayor Mark Meadows told the Lansing State Journal that because the Tennes family won't host same-sex “weddings” on their farm in a different jurisdiction, they're ineligible to participate in the farmers' market.

“This is about them operating a business that discriminates against LGBT individuals,” not the Facebook posts, he said, “and that’s a whole different issue.”

Country Mill Farms declined to host a same-sex ceremony in 2014, before the Supreme Court imposed same-sex “marriage” on all 50 states. It referred the two lesbians who sought to use its property to another venue without moral objections.

For a while, the Tennes family decided it would stop hosting weddings at all on their farm. This was so they could “maintain our personal religious beliefs.”

“The Country Mill family and its staff have and will continue to participate in hosting the ceremonies held at our orchard,” they announced in December, according to a statement on the Daily Signal. “It remains our deeply held religious belief that marriage is the union of one man and one woman and Country Mill has the First Amendment right to express and act upon its beliefs. For this reason, Country Mill reserves the right to deny a request for services that would require it to communicate, engage in, or host expression that violates the owners’ sincerely held religious beliefs and conscience.”

The suit also asks the court to halt the discriminatory city policy, declare it unlawful and unconstitutional, and award nominal and compensatory damages.

“All Steve wants to do is sell his food to anyone who wants to buy it, but the city isn’t letting him,” said ADF Legal Counsel Kate Anderson. “People of faith, like the Tennes family, should be free to live and work according to their deeply held beliefs without fear of losing their livelihood. If the government can shut down a family farmer just because of the religious views he expresses on Facebook—by denying him a license to do business and serve fresh produce to all people—then no American is free.”

“Never before would I ever have thought that the faith that we have here at our family and at our home, at our farm, would prohibit us from being allowed to participate in the community,” Tennes said in a video released by ADF.

“This lawsuit simply asks the court to uphold that freedom for a Catholic farmer, who should be free to sell his produce without coercion, discrimination, or intimidation by the government because of his beliefs about marriage,” said ADF Senior Counsel Jeremy Tedesco. “The city must respect Steve’s constitutionally protected freedom to express his religious beliefs on social media sites without being forced to surrender his right to participate in the marketplace.”

Same-sex “marriage” has caused more and more photographers, bakers, florists, and people in the wedding industry to choose between their faith or their livelihood.

On May 4, President Trump signed an executive order aimed at protecting religious liberty.

“No American should be forced to choose between the dictates of the federal government and the tenants of their faith,” he said at its signing ceremony.

Critics of the order, including ADF, said it offered “no specific relief” for Christians facing government discrimination for their views on marriage.

One of Trump's main campaign promises to social conservatives was to protect religious liberty.

“Americans should not be treated worse by the government simply because the government does not like the thoughts and ideas that inspire and guide their lives,” Country Mills Farms wrote on its Facebook page on May 31. “We are working to resolve this situation so our family and other Americans who may find themselves in similar situations are allowed to live freely and contribute to the marketplace.”

The business expressed its appreciation for “our customers and the relationships we have built in East Lansing during the farmer’s market. Thank you for your understanding and patience as we work toward righting this wrong and returning to our customers at the East Lansing Farmer’s Market.”