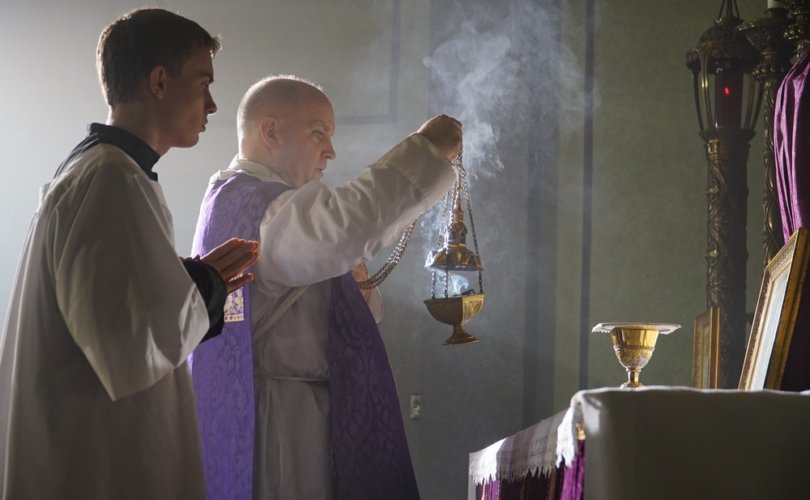 Mass of the Ages

OAKWOOD, Ohio, July 12, 2020, (LifeSiteNews) – A group of filmmakers is working to create a “stunning” documentary about the Traditional Latin Mass that will show the “beauty of our timeless traditional liturgy” with the hope that such a film will help “begin to restore the Church.”

The film, called “Mass of the Ages,” will focus on the beauty and meaning of the Latin Mass as well as its role in bringing people back to Catholicism (watch trailer here).

In a press release on June 16, the group of Catholic filmmakers and designers stated that the “aim (of the documentary) is to show that the loss of faith the Church has experienced in the last half century will only be repaired once there is a return to Christ and His real presence in the Eucharist, and that the Traditional Latin Mass is where we are to receive Him and worship Him with the utmost solemnity and adoration.”

Only one-quarter of Catholics go to Mass, while only one-third of Catholics believe in the Real Presence of Jesus in the Eucharist.

“Since there’s a massive loss of Catholic faith, we need to investigate Catholic worship,” the group stated.

“We believe what the Church teaches: Lex Orandi, Lex Credendi: loosely translated, as we pray, so we believe,” Cameron O’Hearn, director of the documentary, told LifeSiteNews.

“We will deal honestly and carefully with the implementation of Vatican II,” he continued, “as well as show the beauty of the Mass of the Ages—the Traditional Latin Mass—which has stood the test of time, has powered the evangelization of the world, and created saints.”

The documentary will include stories from authentic Traditional Catholics “to investigate the power of the old Mass and the profound effect it has on our spiritual lives.” They are also hoping to interview prominent Catholics including Cardinal Raymond Burke, Dr. Peter Kwasniewski, Christian Smith, Dr. Taylor Marshall, and Jennifer Donelson.

O'Hearn is using Kickstarter to raise $77,700 USD to begin production. And he is close to raising the full amount. The “all or nothing” goal must be reached by July 23 or the campaign loses everything. If the goal is reached, production will begin in the Fall and wrap up by Christmas 2021.

The documentary will discuss the benefits of the Latin language, God speaking in silence, music lifting the soul, and architecture enriching worship. The Traditional Mass will be filmed to show its “eternal beauty.”

The documentary will not only appeal to Traditional Catholics, O’Hearn explained, but also will speak to the “typical Novus Ordo Catholic who make up the majority of the Church.”

To find out more about the project and to donate to it, go here.

July 15, 2020 update: O'Hearn has raised $77,700 USD and can begin production. He also has released 'stretch goals' that will allow the Catholic filmmakers to translate the film into 12 languages, feature ICKSP and FSSP parishes across the country, reach hundreds of thousands of Catholics online, and to film at traditional communities in other countries. Production will begin in the Fall and wrap up by Christmas 2021.