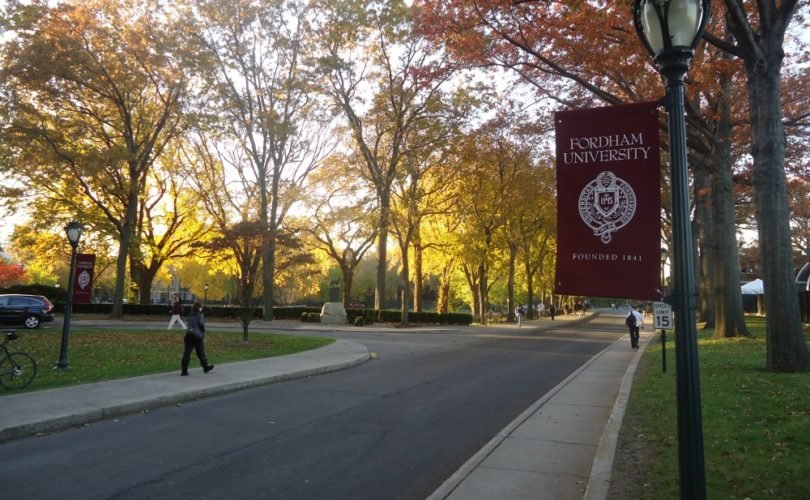 NEW YORK CITY, July 7, 2015 (LifeSiteNews) — Despite a ban in its conduct code for faculty, staff, and students, Fordham University will not sanction the head of its theology department for his recent homosexual “marriage” to an Anglican youth minister, but instead is wishing them well.

“While Catholic teachings do not support same-sex marriage, we wish Professor [Patrick] Hornbeck and his spouse a rich life filled with many blessings on the occasion of their wedding in the Episcopal Church,” Bob Howe, senior director of communications for the Bronx-based Jesuit university, told Aleteia news service.

“Professor Hornbeck is a member of the Fordham community, and like all University employees, students and alumni, is entitled to human dignity without regard to race, creed, gender, and sexual orientation,” the statement continued.

Patrick Reilly, president of the Cardinal Newman Society, which is devoted to maintaining a faithful Catholic spirit in America’s hundreds of Catholic universities, took Fordham to task.

“A consistently faithful Catholic university can and should enforce moral standards.  But few Catholic universities are prepared for this situation, legally or philosophically.  Not many have the employment standards in place, let alone the commitment to Catholic teaching, to take appropriate action to dismiss a professor who publicly defies that teaching.  And that's a two-fold scandal involving both the professor and the university,” Reilly told LifeSiteNews.

Prof. Hornbeck, is the chairman of Fordham’s theology department while his partner is Patrick Anthony Bergquist, the director of children, youth, and family ministries at St. Bartholomew’s Episcopal Church in NYC, who is also working on a Broadway-bound musical.

Fordham’s reaction is no surprise. The university’s record on standing up for Catholic teaching is chequered. It has resisted efforts by a campus pro-abortion club to get it to dispense contraceptive services on campus, but has done nothing to prevent students from joining the club. It invites pro-abortion politicians to speak at convocations, honored pro-abortion judges, and advertised internships for Planned Parenthood.

Franciscan University of Steubenville is one of a handful of Catholic universities in the U.S. that requires its theology faculty to sign a mandatum with their local bishops, promising to teach and live by Catholic teaching. Spokesman Tom Sofio told LifeSiteNews this alone could provide grounds for dismissal of faculty engaged in homosexual activities.

But in addition, the faculty handbook states that grounds for dismissal for all faculty include “grave moral delinquency…[and] moral conduct bringing scandal upon themselves.”

A similar contrast is afforded by Canada’s Trinity Western University, whose Community Covenant requires students and faculty to refrain from sexual activities outside Christian marriage. The legal professions in English Canada’s biggest provinces view this as anti-homosexual discrimination and have refused to accept TWU law graduates. Instead of caving in, the evangelical Christian school is taking the professions to court and is prepared to fight them all the way to Supreme Court.