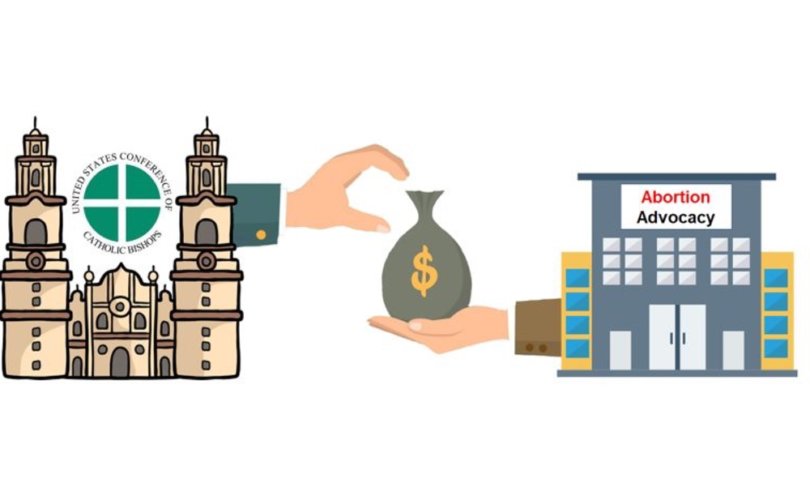 (Lepanto Institute) – From 2009 through 2012, members of the Reform CCHD Now Coalition had regular communication with the leadership of the Catholic Campaign for Human Development (CCHD).  Through the publication of reports, the coalition sounded the alarm on CCHD funding for organizations acting in direct opposition to Catholic moral and social teaching, which forced the CCHD to update its grant policies in late 2010.  One of the new policies implemented by the CCHD was on coalition memberships.

All applicants for CCHD funding must sign a grant agreement which says:

Membership in one such coalition that would violate this guideline is the National Committee for Responsive Philanthropy (NCRP).  Members of the NCRP include three CCHD-funded organizations and four of CCHD’s most favored network affiliations.  The problem is that NCRP is very active in working for the total decriminalization of abortion and is responsible for a number of pro-LGBT (including same-sex “marriage”) efforts.

All members of NCRP are required to pay annual membership dues.  In addition to violating the CCHD grant agreement, membership in NCRP means that any organization receiving funding from the CCHD is, by extension, providing Catholic funding to NCRP and its initiatives.

The membership dues pay scale is as follows:

Dues-paying members of NCRP that are directly tied to the CCHD are Faith in Action, Gamaliel, IAF Northwest, Metro IAF, Jobs with Justice, Latino Union, Faith in Action Florida, and New Orleans Center for Racial Justice.

Faith in Action, Gamaliel, and IAF (Which stands for the Saul Alinsky-founded Industrial Areas Foundation) are three of the CCHD’s most favored network affiliations.  In 2015, Faith in Action (then called PICO National Network) received a $500,000 strategic grant from the CCHD.  Additionally, no less than 10 of its affiliates receive CCHD funding every year.  Currently, 11 CCHD grantees are affiliates of Faith in Action.  Last year, we reported Faith in Action’s political, pro-abortion, pro-LGBT and pro-riot and looting activities here, here, and here.  According to Faith in Action’s tax form 990 from 2019, Faith in Action’s total expenses came to $19.693 million, meaning that it paid NCRP $1,500 in annual dues.

According to a March 2020 article on the Gamaliel Foundation’s website, Gamaliel received a strategic grant from the CCHD in 2019 (the amount was undisclosed and not announced on the USCCB website).  Like Faith in Action, at least 10 Gamaliel affiliates receive CCHD funding every year, which is the current case.  In 2012, Gamaliel was discovered to have lied directly to the CCHD about its membership in a coalition promoting same-sex “marriage.”  Worth noting, as we explore the evidence against NCRP and its dues-paying members, the executive director for the Gamaliel Foundation, Ana Garcia-Ashley, served as a board member for NCRP from 2010-2016.  According to Gamaliel’s tax form 990 for 2019, Gamaliel’s expenses came to $851,757, meaning they paid $325 in annual dues to NCRP.

The CCHD was originally founded to finance Saul Alinsky’s Industrial Areas Foundation (for the history on CCHD’s origins, click here), and every year, at least 10 of its members receive CCHD funding.  Northwest IAF and Metro IAF file their taxes separately, so their dues assessments would also be determined separately.  According to IAF Northwest’s tax form 990 for 2019, their expenses came to $319,000, which means their dues would be assessed at $225, and Metro IAF’s annual expenses for 2019 came to $1.379 million, meaning their dues would be $500.

CCHD used to fund many more affiliates of Jobs with Justice than they currently do (more on them in a follow-up report), and currently only the JwJ affiliate receiving CCHD funding is the Tompkins County Workers’ Center.  That said, JwJ had $4 million in expenses for 2019, putting their annual dues at $750.

All told, NCRP is receiving around $4,350 annually from CCHD-funded organizations and networks.

In addition to the massive amounts of Catholic money the CCHD provides to these organizations and their members, the CCHD is regularly singing their praises.  In celebrating its own 50th anniversary, the CCHD posted its high regards for Faith in Action, Gamaliel, and the Industrial Areas Foundation.

For Faith in Action, it said, “Faith in Action promotes solidarity and transform systems through organizing.  Sign up for email alerts to stay informed and know when to take action!”

For Gamaliel, it said, “Your support of the Gamaliel Network allows them to continue training leaders all over the country and maintain their national campaigns.”

The importance of the CCHD’s relationship with these organizations cannot be underscored enough.  These affiliate networks comprise the most-favored organizations receiving Catholic funding every year, and as noted above, they are dues-paying members of the National Committee for Responsive Philanthropy.

There are HUNDREDS of pro-abortion articles on NCRP’s website, but a few of the most recent are all that is necessary to indicate the rabid promotion of baby killing this organizations engages in.  For instance, in a press release responding to the Texas law against abortion, NCRP said:

“The National Committee for Responsive Philanthropy (NCRP) hears abortion leaders and supports the decision of if, when and how people experience reproductive parenthood, and recognizes SB 8, and all other heartbeat bans, for the unconstitutional violations to abortion access that they are.”

In January of 2021, NCRP published a “factsheet” about the “need” to fund abortion facilities due to recent legal moves to restrict access.  The purpose of the factsheet was to encourage the increase of donations to abortion funds.

In March of 2021, NCRP leadership made it clear that access to abortion was a primary focus area of its work in an article titled, “It’s Time for Philanthropy to Think Differently about Reproductive Access.”  In the article, NCRP equated abortion with “economic justice, racial justice, immigrant rights and health equity,” saying:

Reproductive rights – and the availability of safe, legal and accessible abortions — are inexorably intertwined with economic justice, racial justice, immigrant rights and health equity. So is the expectation of safety – mental and physical.

Who gets to make which choices –– or gets a choice at all –– is a structural issue.

NCRP’s new focus on reproductive access and gendered violence in our Movement Investment Project continues our efforts in increasing philanthropic support for frontline groups combatting the structures that stand in the way of social justice.

In July of this year, NCRP issued a statement to its members titled, “A Roadmap to Supporting Health Equity Through Abortion Access – Why I Fund the Frontlines.” The very first line of the article says, “I urge you to join with me in a frontline struggle for health equity: ensuring abortion access.”

That same month, NCRP created an entire page titled, “Shifting Grantmaking to the Abortion Providers and Local Independent Clinics” which is dedicated to convincing donors to provide funding to abortion facilities.

NCRP isn’t just promoting abortion to its funders and members, though.  It’s also literally shouting the push for abortion on social media, such as with this tweet from September of this year.  In the tweet, NCRP announced that it is “hosting an emergency call” to “hear from frontline leaders on what philanthropy can do now to help local, independent abortion clinics.”

Through the course of this investigation, we made another very interesting discovery.  NCRP has been supporting LGBT activism for decades, marking another clear violation of the CCHD’s grant guideline on coalition memberships.  For instance, in 2009, NCRP published an article titled, “Are We Making Progress? Reflections on the LGBTQ Movement, Social Justice and Philanthropy.”  But what caught our attention was this NCRP tweet from October 2013, decrying the CCHD’s defunding of several organizations over membership in a coalition that supported same-sex “marriage.”

At issue were eight former CCHD grantees who lost their CCHD funding because they refused to end their membership in the Illinois Coalition for Immigrant and Refugee Rights after the coalition had formally endorsed same-sex “marriage.”  Wondering why NCRP would be interested in CCHD grantees losing funding for supporting the mockery of marriage, we discovered that Aaron Dorfman, the President and CEO of NCRP, had contributed comments in 2013 to a report denouncing the efforts of the Reform CCHD Now coalition.

In the report, Dorfman decried the move to restrict the coalition work of CCHD grantees by preventing them from being members in coalitions that promote grave moral evils.  From the report:

Aaron Dorfman, executive director of the National Committee for Responsive Philanthropy (NCRP), spent more than a decade working for CCHD-funded organizations and with a network of Catholic churches on campaigns to empower low-income communities. Coalition work among groups that disagreed on issues was vital to achieving tangible public-policy victories on living wages, better schools and improved access to public transportation. Dorfman said the climate today is much less hospitable because of pressure groups like the American Life League that influence some in the Catholic hierarchy to back away from these strategic alliances.

“Now it seems that you can’t even be associated with certain people or groups,” he said. “This is a fundamental and significant difference.” This new posture also cuts against evidence collected in multi-year research from NCRP, which found that the most effective community organizing involves strategic alliances.  “One of the key findings is the biggest wins came in cases where there were robust coalitions and a variety of organizations working on an issue,” Dorfman said. “To the extent that this new shift inhibits coalition work, that’s going to make victories harder.”

In 2011, Dorfman highly encouraged donors to give to the CCHD.  In an article by the heretical National Catholic Reporter, titled, “Community Organizing Celebrated as Catholic Action,” Dorfman spoke in defense of the CCHD against “intensive attacks in recent years by the American Life League and other ultraconservative Catholic social, political and ecclesiastical groups.”  According to the article:

“Nine out of 10 grant makers grant less than 10 percent to [projects dealing with issues of] policy,” [Dorfman] said. “A tiny percentage of that goes to community organizing.”

“Now is the time to challenge grant makers” to allocate more of their social change funding to community organizing groups such as those funded by the CCHD, he said.

Lest we overlook the obvious, as NCRP noted in 2013, CCHD has defunded organizations for membership in coalitions that supported same-sex “marriage.”  And NCRP’s outright war on preborn babies, while taking dues-money from Catholic-funded organizations, makes this situation so much worse!

The currently CCHD-funded members of Faith in Action, Gamaliel, Industrial Areas Foundation and Jobs with Justice are as follows:

Please contact the CCHD and demand answers!  Ask them how or why organizations like these ever received a grant and if CCHD will demand Catholic money to be returned for violating CCHD guidelines and Catholic moral/social teaching. Also, contact your bishop and ask them to withdraw completely from the CCHD.