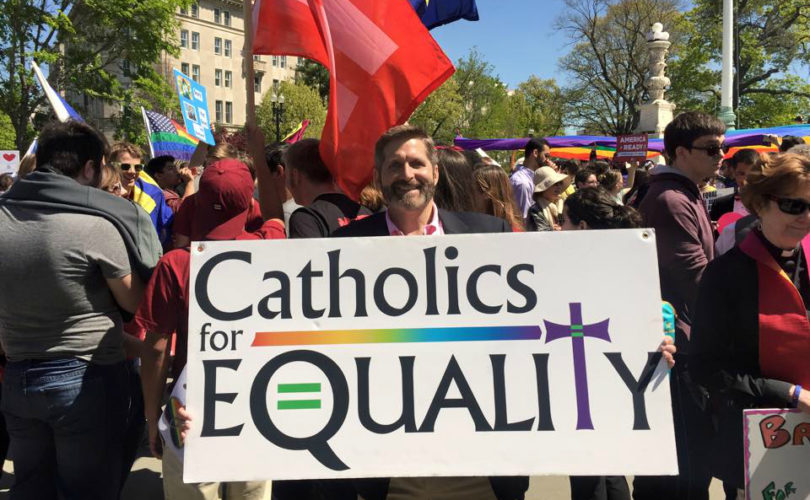 Homosexual activist Phil Attey joins the rally in support of same-sex "marriage" in front of the Supreme Court on April 28, 2015.Facebook

WASHINGTON, D.C., April 29, 2015 (LifeSiteNews.com) — The former executive director of the dissident group Catholics for Equality says the Catholic Church is wrong on marriage — but claims it is “evolving.”

In an interview with LifeSiteNews in front of the Supreme Court, Phil Attey said that support for the legal recognition of same-sex relationships “is an evolution of my faith.”

“Jesus is calling on all of us to care for the sick, the poor, the marginalized, and the oppressed. It's Catholic social justice,” he explained. “Most Catholics understand that. That's why, in poll after poll, Catholics support equality, including marriage equality, more than the national average — in fact, normally, 10 to 15 points higher than the national average.”

A national poll conducted in March 2014 by Pew Research shows that 57 percent of U.S. Catholics say they support changing the definition of marriage, which is within several points of the national average. The poll showed that 65 percent of Catholics who attend Mass less than once per week support same-sex “marriage,” while 45 percent of Catholics who attend at least once per week support changing the definition of marriage.

Founded in 2010, Catholics for Equality not only opposes the Church on marriage, but it also attacked U.S. bishops for holding a “Fortnight for Freedom” related to a federal mandate requiring insurance for abortifacients, contraceptives, and sterilization.

Attey is a longtime member of homosexual activist organizations and movements, including one that targeted allegedly gay priests in the Archdiocese of Washington by threatening to “out” them in retaliation for the archdiocese’s defense of marriage. His Catholics for Equality biography claims that Attey — a former member of the radical activist group Human Rights Campaign — “led the global online response to the murder of Matthew Shepard” in 1998.

Shepard's death was a galvanizing event for homosexual activists, who claim the young man was killed because of his sexuality. However, recent evidence indicates his death was more likely related to drug dealing, not same-sex attractions.

Asked whether he disagrees with the Church's teachings on marriage and sexuality, Attey told LifeSiteNews, “I have problems with some of the encyclicals. When you look at the Church's teachings, you have to look at more than just one pope's encyclical on sexuality. You have to look at our social justice teachings, which are much more strongly rooted in our faith. And our need to care for others.”

“So, no, this is an evolution of my faith. One important thing to remember is there is a huge difference between the hierarchical or the institutional Church and the Body Church, the people. We represent the Body Church, we represent the people. Our mothers, our fathers, our brothers, our sisters, our neighbors, our fellow parishioners, who all support us, all support gay people. It's just the hierarchy is evolving on the issue. And they are.”

According to the Catechism of the Catholic Church, “tradition has always declared that 'homosexual acts are intrinsically disordered.'”

Homosexual acts “are contrary to the natural law,” it adds. “They close the sexual act to the gift of life. They do not proceed from a genuine affective and sexual complementarity. Under no circumstances can they be approved.”

The Church says that people with same-sex attractions “must be accepted with respect, compassion, and sensitivity. Every sign of unjust discrimination in their regard should be avoided. These persons are called to fulfill God's will in their lives and, if they are Christians, to unite to the sacrifice of the Lord's Cross the difficulties they may encounter from their condition.” It also notes that “homosexual persons are called to chastity.”

Asked by LifeSiteNews whether “the Catechism is in error on natural law and marriage,” Attey said, “I think it's evolving.”

Asked about the use of “evolving,” and whether the Church is “not correct” in its current teachings on marriage — which is an issue of faith and morals, the two areas in which the Church claims infallibility — Attey simply answered “yes.”

Self-described “gay man” and Catholic Allen Rose, who is with the pro-gay group Dignity USA, spoke to LifeSiteNews after the Attey interview, and said that “the Catechism is a large book. There are other teachings in the Church, too, there are teachings about living with one's conscience.”

“As a gay man, if I do my prayer and discussions, and move to a belief that living an out, proud life as a gay man, then I am living within a teaching of the Church,” said Rose.

In its description of “Moral Conscience,” the Catechism states that “the education of conscience is indispensable for human beings who are subjected to negative influences and tempted by sin to prefer their own judgment and to reject authoritative teachings.”

It also acknowledges that while “a human being must always obey the certain judgment of his conscience … it can happen that moral conscience remains in ignorance and makes erroneous judgments about acts to be performed or already committed.”

Attey and Rose were participating in a rally to support changing the legal definition of marriage when LifeSiteNews spoke with them.

The mission statement of Dignity USA says it “works for respect and justice for people of all sexual orientations, genders, and gender identities—especially gay, lesbian, bisexual, and transgender persons—in the Catholic Church and the world through education, advocacy, and support.” Last year, the powerful, pro-gay non-profit Arcus Foundation gave Dignity $200,000 “to influence and counter the narrative of the Catholic Church and its ultra-conservative affiliates in regard to LGBT rights and dignity within and outside of the church.”

The two-year grant specifically targeted the Synod on the Family and World Youth Day.