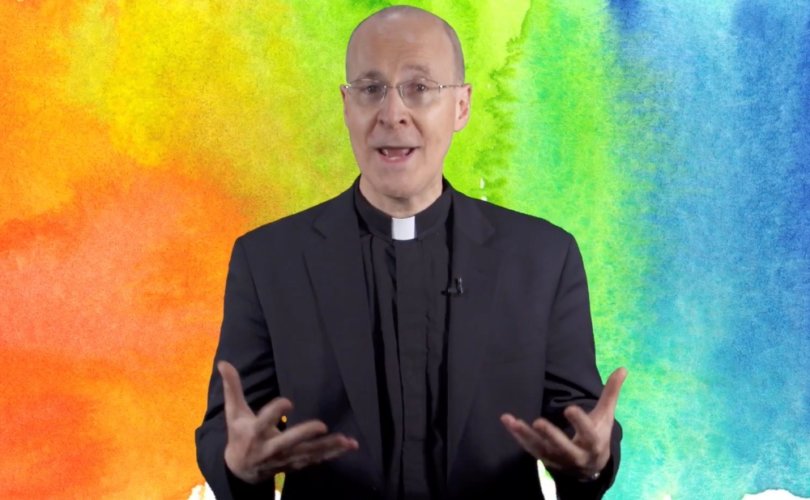 DUBLIN, August 3, 2018 (LifeSiteNews) – An organization of lay Catholics has called for the invitation of a controversial LGBT-activist priest and Vatican advisor to speak at the upcoming World Meeting of Families to be rescinded.

The Irish branch of the Tradition, Family, Property (TFP) organization is asking Catholics to sign a letter to Ireland’s Archbishop Diarmuid Martin, the host of the Vatican-backed conference, asking that American Fr. James Martin, SJ be disinvited. (Full letter below.)

“We are disappointed and greatly concerned that Fr. James Martin, SJ will speak at the event, casting a shadow over the proceedings,” reads the letter. “Fr. Martin is well known for his dissent from Church teaching on sexual morality.”

TFP objects to Fr. Martin’s use of the expression “LGBT Catholics” because it makes no distinction between chaste Catholics who struggle to master their same-sex attractions and people who “have yielded” to homosexual sex.

The organization also opposes Fr. Martin’s support for New Ways Ministry, which the letter says is a “pro homosexual and lesbian religious organisation…declared gravely unacceptable by the United States Conference of Catholic Bishops.”

TFP observes that Fr. Martin disagrees with the Catechism of the Catholic Church’s description of homosexual attraction as “gravely disordered” and states that this disagreement could “prevent” people with same-sex desires from “arriving at a true understanding of their condition.”

This, the TFP believes, “is a great disservice to those whom [Fr. Martin] purports to help.”

In an additional summary of reasons why they believe Fr. Martin is an inappropriate choice of speaker for the August event, the organization mentions the priest’s tweet of a “blasphemous depiction” of the Blessed Virgin Mary.

The long-time editor of American Jesuit magazine America, Martin is scheduled to speak at the World Meeting of Families on Thursday, August 23 at 11:30. His presentation is titled “Showing Welcome and Respect in our Parishes for ‘LGBT’ People and their Families.”

Fr. Martin has already lost speaking engagements, thanks to the complaints of concerned Catholics. They have included appearances at Catholic University of America in Washington, DC; at an Annual Investiture Dinner of the Order of the Holy Sepulchre in New York City; and for a Catholic charity in London, England.

The hosting by your Archdiocese of the World Meeting of Families should be a joyful occasion for Ireland. The choice of Dublin as venue by Pope Francis should serve as a consolation for Ireland at a difficult time and is of course the effective reason for the Pope’s pastoral visit.

We are disappointed and greatly concerned that Fr. James Martin, S.J. will speak at the event, casting a shadow over its proceedings. Fr. Martin is well known for his dissent from Church teaching on sexual morality. He has articulated views which condone homosexual behaviour in contradiction of the Magisterium.

To present just one of Fr. Martin’s quotes:

“LGBT Catholics bring unique gifts to the church—both as individuals and as a community. These gifts build up the church in special ways, as St. Paul wrote when he compared the People of God to a human body (1 Cor. 12:12-27).”

Fr. Martin makes no distinction between people who struggle courageously with same sex attraction (who cannot therefore be considered “LGBT”) and those who have yielded to an immoral and unnatural lifestyle condemned by the same Apostle whom he quotes above.

Fr. Martin is a supporter of New Ways Ministry, a pro homosexual and lesbian religious organisation which has been declared gravely unacceptable by the United States Conference of Catholic Bishops. He has publicly accepted an award from this group, delivered a talk at their event and subsequently developed this talk in to a book.

Fr. Martin is also in disagreement with the Catechism of the Catholic Church’s reference to homosexual inclination as “gravely disordered”.  In this way he would prevent those with same sex inclination from arriving at a true understanding of their condition in the light of church teaching and God’s mercy. This is a great disservice to those whom he purports to help.

We believe that sowing error and confusion should have no place at the World Meeting of Families. For this reason, we strongly request you to disinvite Fr. James Martin from speaking at so important an event.