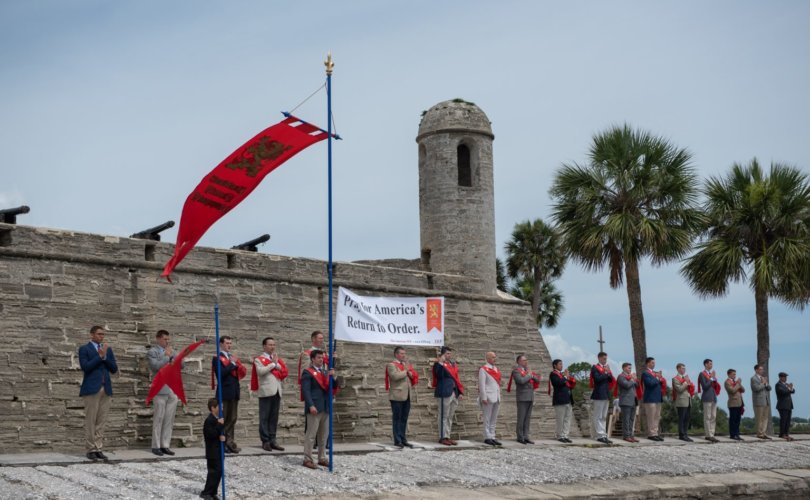 BATON ROUGE, Louisiana, June 18, 2020 (LifeSiteNews) – A Catholic organization has launched a nationwide prayer campaign across America to pray the rosary in every state capitol so that the country will “return to order.”

The American Society in Defence of Tradition, Family, and Property (TFP) is traveling across the states, holding rosary rallies at every state capitol in the midst of massive restrictions as lockdowns loosen and in the midst of cities reeling from riots.

“Our objective is to ask God to help America to return to order as soon as possible. We don’t like the way things are going with the ‘new normal’ of the COVID socialist solutions, and we are absolutely opposed to the anarchy we see in today’s streets,” stated a spokesman for the group in a video about the campaign.

Volunteers from TFP’s America Needs Fatima campaign will also participate in the campaign.

“At this time of great uncertainty and confusion,” Robert Ritchie, America Needs Fatima Director, said, “we need to lift our eyes to God and His Blessed Mother and pray for calm, confidence and courage.”

“Just about everyone is suffering in some way from the lockdowns, job loss, fear and general turmoil,” Ritchie continued. “Human solutions only go so far. We need a lasting remedy to restore the moral fabric of our nation. What Our Lady of Fatima requested in 1917 is most relevant today: conversion, prayer and penance.”

TFP volunteers travel by caravan, carrying a statue of Our Lady of Fatima, invoking Her aid and protection throughout the campaign.

On June 3rd, the campaign began at the Marian Shrine of Our Lady of La Leche in St. Augustine, Florida. TFP chose this location as it is the shrine of the first Catholic parish mass said in Florida by Father Francisco Lopez de Mendoza Grajales in 1565. Many people, including local TFP members, volunteers, and passersby, joined in the public recitation of the rosary.

The groups traveled to Harrisburg, Pennsylvania, on June 12th, praying on the steps of the State Capitol. Young boys from TFP’s annual Call to Chivalry Camp joined in the prayer rally.

“Any serious and lasting solution to the civil unrest and criminal violence sweeping the nation must focus on God and obedience to His eternal law,” Ritchie wrote.

“This peace was the goal of the boys attending the 2020 Call to Chivalry Camp sponsored by the American Society for the Defense of Tradition, Family and Property (TFP).”

“With rosaries in hand, they held a rosary rally to restore One Nation Under God,” he continued. “They prayed the rosary for America on the steps outside the State Capitol Building and displayed banners and signs.”

On June 13, TFP members prayed the rosary in front of the State Capitol Building in Baton Rouge, Louisiana as the last stop on the first leg of the Mother of Mercy Caravan.

The prayer rally numbered over 40 people; passing cars honked their horns in support and passersby stopped to take pictures of the peaceful rally.

The campaign to restore order to America continues as TFP members travel to the State Capitols. As TFP travels across America, they welcome everyone to attend the rallies. To donate to the campaign, go here.

“Prayer is very powerful,” Ritchie said. “I firmly believe that the Holy Rosary, in particular, is the key to restore the nation. It gives us the spiritual fortitude to follow God’s law. These Public Square Rosary Rallies will certainly attract God’s blessing on America.”