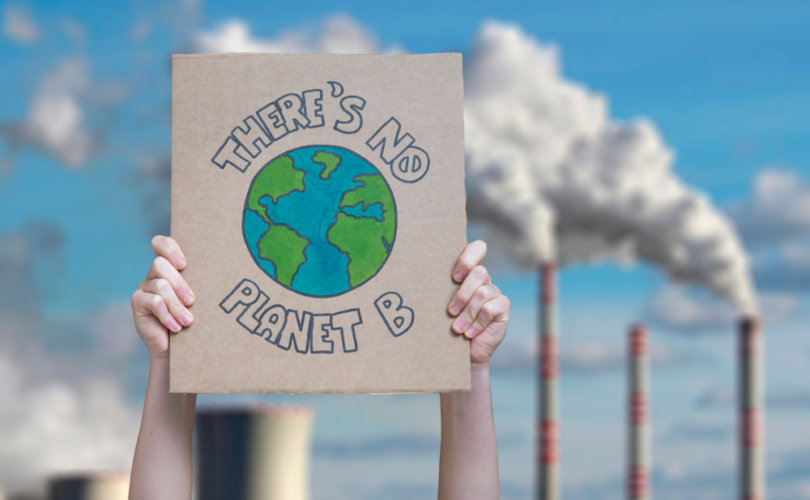 VATICAN CITY (LifeSiteNews) – A number of Catholic dioceses have joined in an ecumenical venture and announced a “divestment from fossil fuel companies” in order to protect the climate from “catastrophic impacts.”

Organized chiefly by the Laudato Si’ Movement, which aims to “turn Pope Francis’ encyclical letter Laudato Si into action for climate and ecological justice,” the mass divestment from “fossil fuels” is inspired by the pontiff’s environmental writings.

Seventeen Catholic dioceses and religious congregations from Ireland, Canada, Brazil, Belgium, Italy and the U.S. have joined the divestment, according to a press release provided to LifeSiteNews by the Dicastery for Integral Human Development.

The aim of the “divestment” is to limit the “catastrophic impacts that could lead to the displacement of hundreds of millions of people” should the earth’s temperature rise by 1.5 degrees celsius, a level that climate change activists argue could lead to a global crisis.

Among the prominent Catholic bodies partaking in the “divestment” – as part of “a challenge to the fossil fuel industry’s dangerous expansion plans and increasingly empty rhetoric on climate” – is the Archdiocese of Armagh, which is home to Archbishop Eamon Martin, the primate of Ireland.

Other Catholic groups include two Catholic dioceses in the U.K.; 11 Catholic religious orders, including the Congregation of the Sisters of St Joseph in Canada, the Religious Institute of the Sacred Heart of Mary in Brazil, the Friars Minor in Great Britain, and the Jesuits in the United States East Province; the Catholic Theological Society of America; two Jesuit universities in the U.S. (Marquette University and Loyola University, Chicago); and several local churches.

The ecumenical “climate change” divestment initiative is also due in part to the World Council of Churches, Operation Noah, Green Anglicans and GreenFaith, among others organizations.

The move has also won the support of officials in the Vatican. Father Joshtrom Kureethadam, the Coordinator of the Ecology Sector in the Vatican’s Dicastery for Integral Human Development, said  the Vatican had “called on Catholic institutions to divest from fossil fuel companies given their harm to the environment.”

“I applaud these prophetic institutions divesting today and encourage every institution in the world to reduce our dependence on such harmful energy sources by divesting from fossil fuels,” he added.

This is how prophetic institutions can live out our values and help the most vulnerable among us. If we want to achieve peace, and ensure a livable planet for all, including the future generations, we need to end our dependence on fossil fuels that fuel the current climate crisis.

Archbishop Martin pointed to what he described as the shared “responsibility” for the “problems” and solutions to those problems and encouraged others to imitate the initiative.

— Article continues below Petition —
CANCELED: Stand with Fr. JesusMary after he was BARRED from Priestly Ministry for Criticizing Pope Francis!
Show Petition Text
9838 have signed the petition.
Let's get to 10000!
Thank you for signing this petition!
Add your signature:
Show Petition Text

“Each one of us must accept our personal and collective need to change and make sacrifices, recognising the inherent issues of justice and fairness that are involved, and realising, as Pope Francis says, that ‘the cry of the earth’ is especially ‘the cry of the poor,’” he said.

The press release noted that the mass divestment from reliance on fossil fuels is fueled by an investigation by The Guardian into the “world’s largest fossil fuel firms and the scores of planned “carbon bomb” oil and gas projects that would push the world past the goal of limiting global heating to 1.5°C and could lead to the displacement of hundreds of millions of people.”

As noted by the Laudato Si movement, Pope Francis has been a consistently vocal advocate for the environmental policies of the Paris Agreement, which is at its core pro-abortion, and connects to the stated U.N. goal of creating a universal right to abortion in line with Goal #5.6 of the U.N.’s Sustainable Development Goals. That goal reads: “Ensure universal access to sexual and reproductive health and reproductive rights,” which is phraseology commonly used to mean abortion and contraception.

Archbishop Carlo Maria Viganò, the former papal nuncio to the United States, has also linked the passion surrounding “climate change” to a desire for increasing governmental control over daily life. Writing in May 2021, Archbishop Viganò noted that green policies would become the successor to COVID mandates: “Even if the pandemic farce does not have the desired effects due to unforeseen events, we already have the next step ready: the climate emergency as the pretext for imposing the ‘ecological transition’ and ‘sustainable development.’”