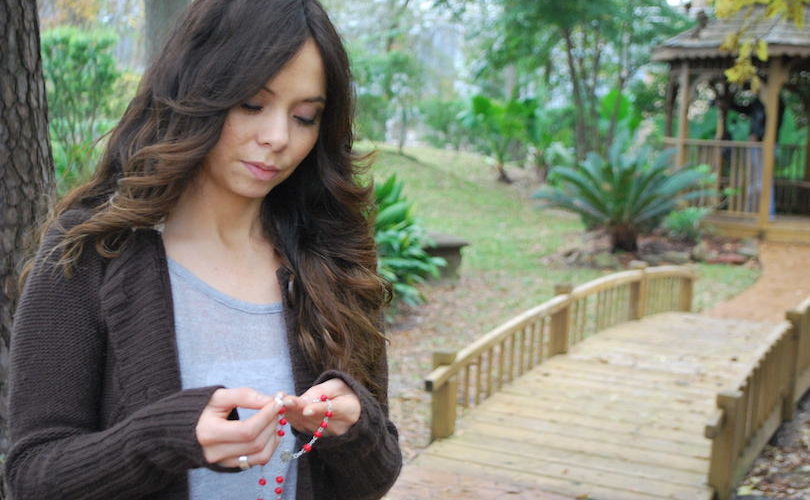 Alexia Palma's employer refused to continue the religious exemption it had granted her for 18 months.First Liberty Institute

HOUSTON, Texas, December 22, 2016 (LifeSiteNews) – A young Catholic woman was fired from her job as a health educator at Legacy Community Health (LCH) for refusing to promote contraception, according to a legal complaint First Liberty Institute filed on her behalf with the U.S. Equal Employment Opportunity Commission (EEOC).

Karen Alexia Palma had for 18 months been granted a religious accomodation from a small portion of her job. Palma taught health classes, and during one of the classes, LCH allowed her to show a video about birth control instead of having to teach about different methods of it. Palma is a devout Catholic and didn't want to violate Church teaching, which states that artificial birth control is an intrinsic evil. By teaching the class, Palma would have also been required to promote forms of birth control that can act as abortifacients.

However, when new management began to control LCH, they said Palma had to teach the class regardless of her beliefs. She also was going to be required to attend training about birth control at Planned Parenthood, the nation's largest abortion company.

“I immediately informed them that I was being accommodated for my religious beliefs and the only reason I had ever been close to Planned Parenthood was outside praying,” Palma told LifeSiteNews.

The class on birth control consisted of less than two percent of Palma's job, she and First Liberty Institute lawyer Jeremy Dys told LifeSiteNews. Her co-workers were even willing to swap certain responsibilities with her so that they could teach the class if playing the video wasn't sufficient. LCH refused to allow Palma to continue being accommodated.

“Employers are required to accommodate their employee’s religious beliefs so long as doing so will not cause an undue hardship to the company,” Dys told LifeSiteNews. “In this case, all that she was asking for was an accommodation for less than two percent of her job…that could never have been an undue hardship for the company. There were ready volunteers that were willing to cover that part of her responsibility while she did some work on their parts too. This could have easily been handled without forcing her to violate her convictions or to keep her job. They put her to that choice between her job and her faith. She choose her faith and was fired because of it.”

“Ms. Leonard revoked my religious accommodation, did not suggest any alternative accommodations, and told me that I had to violate my sincerely-held religious beliefs or else I would be fired,” Palma wrote in her EEOC complaint. “She said, 'If you don’t put your religious beliefs aside, you can’t work here.' At the meeting, I brought proof that the accommodation was minimal and that it was working well without causing hardship to Legacy. I also suggested other ways to accommodate me. But Ms. Leonard wasn’t interested in working with me to find an accommodation.”

“They mocked my faith several times,” Palma told LifeSiteNews. “When she said that, you know, the first thing I thought is, 'I still have to remain professional, respectful.' But in my mind, I was like, 'Wow.' I couldn’t believe that comment that she had made.”

Another doctor told Palma that the Bible was written before birth control was invented, implying Palma's belief in and practice of Catholic teaching is somehow errant.

“I felt horrible, and I felt horrible mostly because I felt they were insulting, first of all, God” and the Catholic faith, said Palma.

“We also respect and value diversity in our staff, which extends to matters of faith,” he said.

“Sometimes employees may need to put aside their own personal beliefs or views in order to meet the job requirements,” Leonard told Palma via email. The EEOC complaint says Palma was fired just eleven days after Leonard learned of her need for an accomodation.

The EEOC complaint also says that Christian LCH employees regularly faced hostility that employees practicing other religions didn't face. For example, they were told “that if the management caught us praying we could get in trouble.” A medical assistant was forbidden from listening to Christian music on her phone or talking about God with others during her free time after a doctor filed a complaint. Other co-workers were told not to talk about the Bible with each other. Another health educator was forbidden from keeping personal religious items on her desk, “even though other people were permitted to have personal items on their desks,” the complaint explains. “It was only personal items related to religion that were banned.”

“All of my life is ordered by my sincere beliefs guided by the religion of Catholicism,” Palma wrote in her EEOC complaint. “I believe it is my duty as a Catholic to help those in need, and I think that I can best give back to my community through health education.”

“Not a single student complained about the [birth control] course and my performance reviews continued to be above average,” Palma wrote, noting that “students were not only provided with all information required by the course, but were also given direct and immediate access to medical professionals on site to answer any and all questions relating to birth control.”

Dys said the EEOC will now look into the complaint.

“They could take this on and pass this to the Department of Justice, and say, 'you guys need to look into this more closely and perhaps bring a lawsuit,' or say 'thanks for bringing it to our attention, now you can file a lawsuit,'” he said.

The EEOC could also recommend mediation or another route.

Palma told LifeSiteNews she is now working as a health educator and care coordinator at another clinic.

“I just hope that they never do this to another employee,” she said.