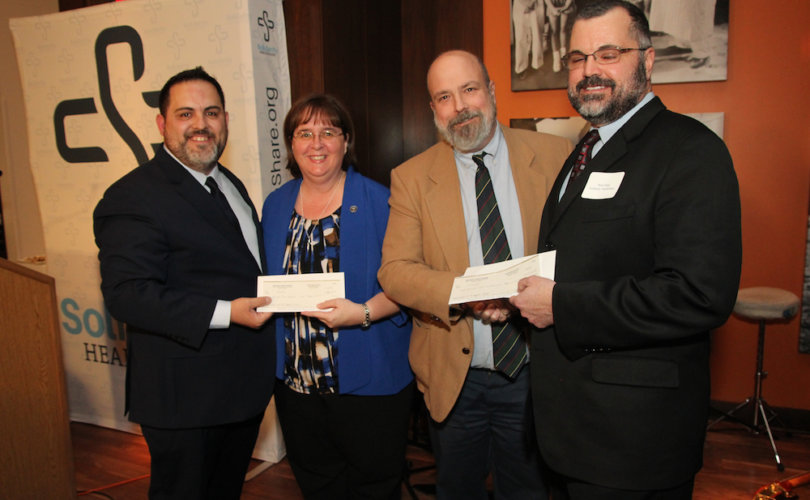 WASHINGTON, D.C., February 6, 2018 (LifeSiteNews) — The Catholic health-share ministry that offers a moral alternative to costly and often problematic healthcare is celebrating tremendous growth and its pivotal place in the changing climate.

Solidarity HealthShare (SHS) is also developing key relationships in its mission to restore and rebuild an authentic healthcare system that respects and defends the sanctity of all human life.

SHS hosted a “Celebration of Life” in conjunction with the March for Life in Washington D.C. Solidarity is a supporter of the March.

The group honored two pro-life healthcare providers with a monetary award that will promote collaboration among them and others to expand genuinely pro-woman healthcare.

Tepeyac Center and Divine Mercy Care of Fairfax, Virginia, and Morning Star OB/GYN of Gilbert, Arizona, each received a $2,500 gift on the eve of the March to support their work in the new Pro Women’s Healthcare Centers Consortium. Tepeyac OB/GYN was founded by former abortionist Dr. John Bruchalski.

Solidarity COO Chris Faddis said the two providers “have not only professed and lived the pro-life movement, but have dedicated their service and their careers to it as well.”

Faddis said the award recipients have also helped other OB/GYNs see that they can go out and be pro-life healthcare providers while living their faith in their practices.

Assisting Catholic healthcare providers in maintaining moral principles is the other side of the coin in the mission of SHS — becoming known as the affordable, efficient, and effective alternative to health insurance that is also respects Catholic Christian principles.

The advent of this Catholic health-share ministry comes at a critical time with healthcare and conscience rights — for both providers and patients — are in the headlines.

Even with the Obamacare individual mandate having been repealed, significant concerns remain in U.S. healthcare, including high insurance costs, issues with coverage availability, and patients losing provider choice.

With the Obama administration’s policies promoting abortion, contraception and other progressive issues, countless individuals and faith-based organizations were faced in recent years with violating their consciences in providing and purchasing healthcare.

Solidarity was already providing a moral alternative to the abortion and contraception-subsidizing Obamacare. Now, as the Trump administration reinforces conscience protections in healthcare, SHS continues to work to foster the ability of patients and providers to participate in healthcare without sacrificing Catholic principles.

Trump’s HHS announced a new conscience protection of the Department of Health and Human Services’ Office of Civil Rights last month. The new Conscience and Religious Freedom Division brings enforcement of conscience and religious liberty laws in healthcare back as a focus — a U-turn from the Obama administration’s stance.

In addition, HHS’ Office for Civil Rights announced a new proposed rule to enforce 25 existing statutory conscience protections for individuals involved in HHS-funded programs. These protect people from being coerced into taking part in activities that violate their consciences, such as abortion, sterilization and assisted suicide.

This was something welcomed by Hahn.

He pointed out that the rule specifically designates healthcare sharing ministry for protection. It also protects patients from being subjected to certain healthcare or services over their conscientious objection.

The proposed rule also explains how conscience protection in healthcare is an actual benefit to society, Hahn noted, through promoting diverse participation in the field, which gives patients the ability to access providers who share their convictions.

Hahn said the proposed rule and the recently revived federal conscience protections are great to have in place but would still be at risk from another subsequent administration that does not uphold the conscience issue.

For this reason, Solidarity HealthShare has begun collaborating with the Catholic Medical Association to explore ways to safeguard the protections.

Chris Faddis lauded the Catholic Medical Association, telling the Celebration of Life gathering that the CMA has been bringing together Catholic doctors from around the country and driving forward the ethic of life in healthcare.

Catholic Medical Association president Peter Morrow, M.D., praised Faddis and Hahn in his keynote speech for the event for SHS providing “affordable and sustainable healthcare that respects and defends life at all its stages.”

“The CMA and Solidarity know full well that true healthcare must be based not only on sound economics,” Morrow said, “but also sound morals and ethics. Both our organizations are committed to the same goal — restoring healthcare.”

To this end, he said the two groups are collaborating on an educational conference in the fall, the theme of which will be restoring healthcare and building a parallel structure to deliver compassionate care.

“Securing conscience rights is critical if the principles of the Catholic Church are to be preserved in the practice of medicine, said Morrow.

But this doesn’t only refer to Catholic patients and healthcare providers.

“And this is true for all pro-life advocates,” Morrow said.

“Yes, we do live in very challenging times,” he added, “and, yes, we are engaging in a fierce battle — a battle between good and evil — however it is the Divine Physician that has chosen each of us to live in this precise time in history.”

Hahn said the time has come for healthcare to respect life and conscience.

“We believe, in this fight for life, it is now time to build a healthcare system that respects and defends life at all stages, lowers costs for families, and provides access to high-quality care where the patient and doctor relationship is respected and encouraged.” Hahn said.