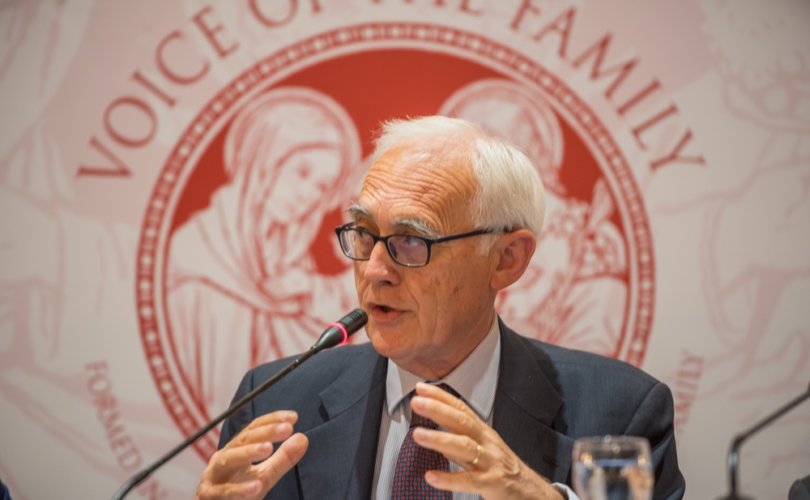 Note: On Oct. 4, 2019, Voice of the Family, a coalition of pro-life and pro-family organizations, hosted a roundtable discussion in Rome to address critical questions for the Church and for the family on the eve of the Synod of Bishops for the Pan-Amazon region. Read LifeSiteNews’s report on this event here. Below is the full address given by Prof. Roberto de Mattei.

October 4, 2019 (LifeSiteNews) – There are, at this moment, two religions within the Catholic Church. The first is the traditional Catholicism, the religion of those who, in the current confusion, continue to be faithful to the immutable Magisterium of the Church.

The second, until a few months ago without a name, now has a name: it is the Amazonian religion because, as declared by the person currently governing the Church, there is a plan to give the Church “an Amazonian face”.

What is meant by an Amazonian face is explained in the Instrumentum laboris for the October Synod and the many declarations of the theologians, bishops and cardinals who have prepared this document. It is a matter of “reinventing” the Church in the words of  Leonardo Boff (Ecclesiogenesis. The base communities are reinventing the Church, Borla, Rome 1978). The Boff ecclesiogenesis has become a cosmogenesis in line with post-modern environmentalism. Its objective is now broader: reinvention not only of the Church, but of creation as a whole on the basis of a new “cosmic pact”  (Cry of the Earth, cry of the poor – For a cosmic ecology, Italian translation Assisi, Cittadella, 1996).

This objective is achieved through the method of reinterpretation of the truth of the Catholic faith. Modernism had previously taught that the most effective means of denial of the truth is distortion, rather than outright attack. Reinterpretation is an indirect negation of the teaching of the faith, more profound than outright denial, and means that the same words are ascribed a new meaning.

For example, the first Article of our Creed teaches:  “I believe in God the Almighty Father, Creator of heaven and earth”.

The Instrumentum laboris proposes a “worldview captured in the mantra of Francis: everything is connected ’” (section 25). However, in no part of the document is it affirmed that all things are hierarchically ordered to God, their Creator, and distinct from the latter. The Earth is presented as a biosphere, an ecosystem, which includes God within it and in which the supreme law is that of  equality of all things. In reality, the prime rule of creation is not the egalitarian interconnection of all things, but their ordinatio ad unum. The errors of ancient and modern pantheism, which absorbs God in the world or the world in God, have been repeatedly condemned by the Church. According to the Catholic faith, “God is distinct from the world”(Vatican Council I, Dogmatic Constitution Dei filius in Denz., section 3001) and, as reiterated in Vatican Council I, “if anyone says that the substance and essence of God and all things is one and identical, let him be anathema ” (section 3923 therein).

The new Amazonian religion reinterprets and distorts the first Article of the Creed, citing the “ancestral wisdom” of the indigenous peoples who see God in the physical elements of nature, without comprehending that God transcends these elements.  They have no notion of transcendence, because they have no notion of creation, and they confuse God with nature, which for them is a Whole which contains God. Christianity has instead explained that God created everything and is in everything, yet no place can contain Him because God is immense, not in a material sense, but in a metaphysical and transcendent sense. God fills the heavens and the Earth, but the heavens and the Earth do not contain Him.

The Amazonian religion not only negates the transcendence of God by including Him in nature, as do pantheism, panentheism and monism; but also denies His Oneness, as does pagan polytheism.

Leonardo Boff, the liberation ecotheologian who collaborated in Laudato sì affirms: “However we wish to interpret it, we have to recognise that the pagans had this extraordinary capacity: they could glimpse the presence of gods and goddesses in all things. In woods, Pan and Silvanus, in the Earth, Gaia Demeter (= Mother Earth) or Ceres, in the sun, Apollo and Phoebus, and so on” (Cry of the Earth and cry of the poor, p. 355).

The Instrumentum laboris summarises the same pantheism and polytheism in these lines, which refer to Laudato sì: «The lives of Amazonian communities, still free of the influence of Western civilisation, are reflected in their beliefs and rituals in relation to the actions of spirits, of divinity  – invoked in many ways  – with and in the territory, with and in relation to nature. This worldview is captured in the mantra of Francis: everything is connected” (LS 16, 91, 117, 138, 240). This same worldview is expressed in many other passages in the document.

With all respect owed to the ecclesiastical authorities, I accuse all those who have approved, or will approve, the Instrumentum laboris on the Amazon, of polytheism and, more specifically, polydemonism because “All divinities of the Gentiles are Demons; our Lord has instead created the heavens ” (Psalms, 95, 5).

I call upon the Cardinals and Bishops who are still Catholic to raise their voices against this scandal. If their silence continues, we will continue to seek the intervention of the Angels and Mary Queen of Angels, to save the Holy Church from every form of reinvention, distortion and reinterpretation.