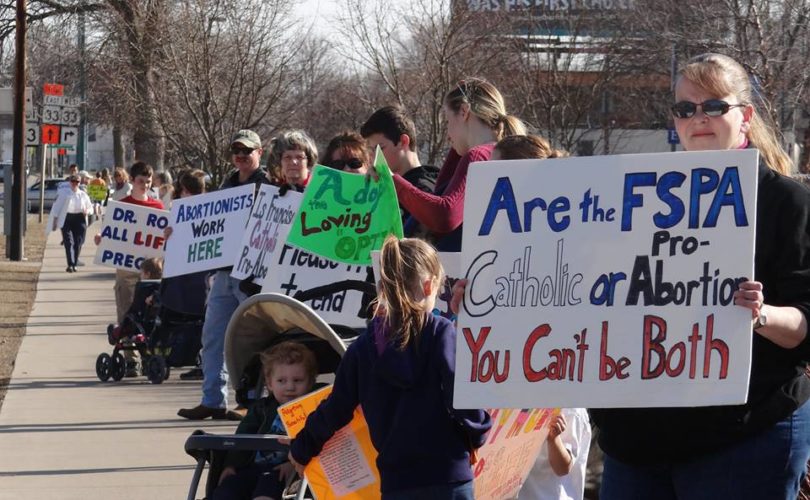 Leif and Karen Arvidson, who are spearheading the protests, say that they were galvanized into action after Dr. Carl Rose, who works at the Catholic hospital part-time, suggested abortion as an option when their eighth child was found to have physical ailments in 2012.

Leif spoke to LifeSiteNews via telephone Wednesday evening, shortly after he returned from a protest at the hospital that he says was attended by over 100 local pro-life activists.

He said that after he and his wife had their negative experiences with Dr. Rose and became suspicious about his background, his wife anonymously called the doctor’s office and was told that Dr. Rose would be willing to perform an abortion up to 20 weeks, for any reason. Leif also said that administrators at the hospital have admitted in private that Dr. Rose does indeed perform abortions at a nearby hospital in Rochester, Minnesota.

Leif also said that in the process of investigating Dr. Rose, he and his wife discovered that two other doctors that work at the Catholic hospital also perform abortions elsewhere, something that was independently confirmed by Pro-Life Action Ministries.

After attempting unsuccessfully to resolve the situation internally with the hospital since 2012, Leif and his wife chose to go public earlier this year.

“It’s scandalous to have abortion providers coming into a Catholic hospital, working with pregnant women who don’t even know that they’re abortionists,” said Leif. “We just think that’s unacceptable, and we’ll continue to press the hospital until they sever the ties with the abortion providers.”

Amidst the growing controversy, the diocese appears to be tentatively standing with the hospital, which is co-sponsored by the Franciscan Sisters of Perpetual Adoration. In a public statement provided to LifeSiteNews by the diocese, the diocese says that “Catholic healthcare in the Diocese of La Crosse is a way that God’s plan for our lives is made real at times of joy and sorrow. Catholic hospitals, founded and run by the sponsorship of religious communities, maintain Catholic principles demonstrated through their medical practices.”

The statement also says that “Mayo Clinic Health System-Franciscan Healthcare, founded on Catholic principles and maintained by the Franciscan Sisters of Perpetual Adoration, has a long history of providing healthcare that closely follows the Ethical and Religious Directives (ERDs) as set forth by the bishops of the United States.”

In June, the Arvidsons also received a statement from Bishop William Callahan, who expressed grave concern about the allegations of “possible abortion or reference” at the hospital, which he said are “scandalous.” The bishop affirmed that he is  “unambiguously, unswervingly, and unabashedly pro-life in all circumstances, without exception.”

While noting that “it is a scandal … when any Catholic healthcare institution associates itself with individuals who perform or counsel at the institution practices incompatible with the Gospel of Life and Catholic moral teaching,” he added “that abortions have not been performed in the past, nor will they be tolerated in the future.”

In a statement to LifeSiteNews, Bishop Callahan stated, “we have no reason to believe that there are any deliberate violations of any ERD at Mayo Clinic Health System-Franciscan Healthcare in La Crosse.” He also said that “the Franciscan Sisters of Perpetual Adoration have stood with the bishop in the enforcement of the ERDs and the administration of the hospital supports the ERDs as ordinary hospital policy.”

LifeSiteNews contacted Mayo-Franciscan hospital, but the hospital declined to comment and directed LSN to their public statements.

While the Arvidsons only began picketing in March, their complaint goes back to May 9, 2012. That was when they first met with Dr. Rose, who they allege “quickly took note of the fact that this was our eighth child” and “also noted that a hole in the heart can be an indicator of Down Syndrome.”

According to Leif’s account of events on the Arvidsons’ website, ExposeMayo.com, “Dr. Rose said that if there was confirmed to be a hole in the heart and there was a risk of Down Syndrome, we would have to discuss how to move forward and what we would want to do. It seemed to us that he was suggesting that we should consider an abortion. We told him that, regardless of what may be wrong, we would definitely have the baby.”

Later, according to Leif, “Dr. Rose followed-up our appointment by sending us a clinical article that spoke about fetal chromosomal abnormalities and Down syndrome. The article mentioned that '[t]ermination of affected pregnancies…plays a role.' It seemed to us that he thought that because we already had a large family, we should not be having another child, and he was suggesting that we should have an abortion.”

The Arvidsons' concerns were not alleviated when, in late June of the same year, Karen was transferred to Mayo's Rochester, Minnesota location. Arvidson says that while they “received good care and doctors and nurses seemed to be doing everything they could to help Karen and baby,” all that changed when Rose arrived. The Rochester hospital is Rose's primary place of work, and Leif claims the quality of doctoral and nursing care dramatically diminished once Rose took over the care of Karen.

The Arvidsons also allege that Dr. Rose told Karen she should not have more children.

The Arvidsons' claims are part of a complicated story of medical care and Catholic identities in the diocese that only became even more complicated earlier this year. Local mainstream reporting indicates that Mayo opened a “special procedures” unit in La Crosse that does procedures — such as sterilizations — that are against Catholic teachings. The new clinic was opened separately so that the La Crosse Mayo location would be able to retain its Catholic identity. But the La Crosse Tribune reports that the La Crosse hospital itself provides birth control, which is in violation of the Church's teachings.

Attempts by the Associated Press and other local media to confirm independently that Dr. Rose performs abortions have not received a direct response from the hospital. However, the Rochester hospital does provide abortions, according to local reporting, and on January 1, 2014 the Rochester clinic officially dropped its Catholic identity.

A statement by Mayo's La Crosse CEO, Tim Johnson, M.D., avoids the issue of whether Rose conducts abortions. In part, the statement read: “Franciscan Healthcare remains committed to compassionate, high-quality health care for all of our patients in accord with its Catholic mission and our legal and medical obligations. We look forward to continued dialogue with Bishop Callahan and the Franciscan Sisters of Perpetual Adoration.”

According to Leif Arvidson, hospital administrators have informed him that they believe the hospital is operating withing the bounds of the Ethical and Religious Directives, and that the abortion-providing doctors will continue to work at the hospital.

The Sisters with whom the hospital is affiliated have also faced criticism for the actions of some of their members. Based in La Crosse, the order's local past-president from 2002 to 2010 — Sister Marlene Weisenbeck — was honored by the White House in 2011. Weisenbeck was the president of the Leadership Council of Women Religious when that group signed a letter claiming the Senate's health care bill did not fund abortions just days before the Affordable Care Act passed into law in 2010.