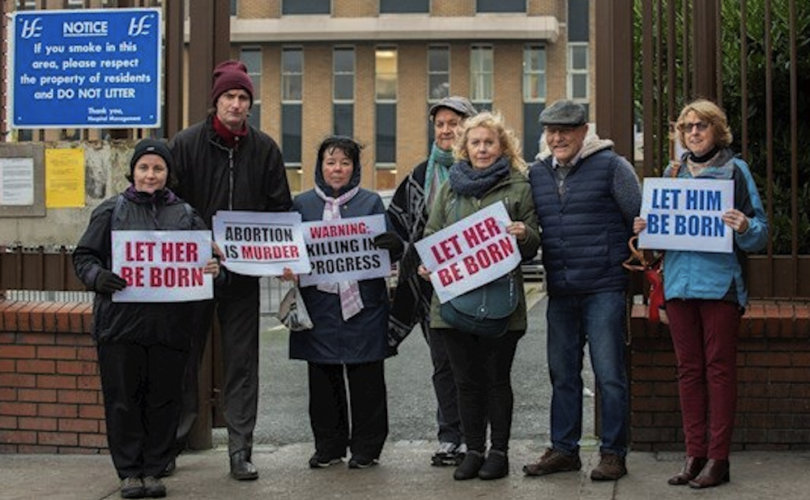 Pro-lifers stand outside Our Lady of Lourdes Hospital in Drogheda, Ireland.

DUBLIN, Ireland, January 8, 2019 (LifeSiteNews) – Pro-life advocates assembled outside Our Lady of Lourdes Hospital in Drogheda, a town just north of Dublin, after social media claims that the first abortion was scheduled to take place at the Catholic medical center on Jan. 7. Catholic priests asked for prayers so that the mother of the endangered child might have a change of heart.

Economist and pro-life advocate Ray Kinsella tweeted that an abortion was to be carried out at the hospital on Monday morning, urging followers to pray for the mother. “Please pray hard that the #mother will recognise the #baby as a gift from God,” Kinsella wrote. The Irish Times quoted a Facebook statement by “Pro-Life Ireland” about the demonstration: “The first abortion in our Lady of Lourdes hospital is scheduled for first thing tomorrow morning Monday 7th. The priests in Drogheda have asked for prayers that the woman will have a change of heart overnight and not go through with the procedure. Please spread the word.”

“1st #abortion due to take place in Our Lady of Lourdes on Monday morning. Please pray hard that the #mother will recognise the #baby as a gift from God”

The hospital has a maternity unit that serves much of the northeast portion of the Irish Republic. They held placards saying: “Abortion is murder;” “Let him be born;” “Let her be born;” “Killing in progress.”

According to the Irish Times, protester Charles Byrne said the group was there “merely to show support for that child that is losing their life today.” Standing in front of the main entrance of Our Lady of Lourdes Hospital, Byrne said his group was there because they “believe hospitals need to be places of care through compassion.” In reference to the 2018 referendum that amended the Irish constitution to allow abortion, Byne said democracy “cannot dictate right and wrong,” while asking the Irish people to reflect whether ending human life is right or wrong.

In June, Irish Prime Minister Leo Varadkar announced that even Catholic hospitals would be forced to perform abortions or referred women to abortion providers, despite Church teachings. Following the constitutional referendum that allowed abortion, Varadkar said publicly-funded hospitals, “no matter who their patron or owner is,” would not be allowed “to opt out of providing these necessary services which will be legal in this state once this legislation is passed by the Dáil (government) and Seanad (senate).”

In July, the Irish Catholic bishops issued a Code of Ethical Standards for Healthcare that declared that Ireland’s new abortion laws are against the “common good” and therefore do not “command obedience” by physicians and caregivers at the 20 Catholic hospitals in Ireland. “No healthcare facility or practitioner should provide,” said the directive, “or refer a patient for, an abortion, i.e. any procedure, treatment or medication whose primary purpose or sole immediate effect is to terminate the life of a foetus or of an embryo before or after implantation.” It goes on to say, “Such procedures, treatments and medications are morally wrong because they involve the direct and deliberate killing of, or a direct lethal assault on, an innocent human life in the earliest stages of development.”

The Catechism of the Catholic Church states that human life must be “respected and protected absolutely from the moment of conception,” noting that every person has the right to life from the moment of conception. Citing ancient sources, including the Didache or “Teaching of the 12 Apostles” of the first century, the Catechism states that abortion that is “willed either as an end or a means, is gravely contrary to the moral law.” Catholic hospitals cannot, therefore, licitly offer abortion. According to, the U.S. Conference of Catholic Bishops’ directive on healthcare, “Catholic health care institutions are not to provide abortion services, even based upon the principle of material cooperation. In this context, Catholic health care institutions need to be concerned about the danger of scandal in any association with abortion providers.”

Our Lady of Lourdes would not comment. Irish Minister for Health Simon Harris, however, said he found it “extraordinarily unedifying” for people to be identifying hospitals where an abortion was purportedly being carried out. Harris said releasing leaked information about patients is a very serious matter. Dr. Peter Boylan, who advises the Irish Health Service executive on promoting abortion, said he supports having exclusion zones around hospitals and other abortion providers in order to prevent pro-life protests. He said  the only persons who should know about patients and their care are the physicians and nurses involved and the patients themselves. He said it is “pretty darn despicable” that warnings about the upcoming abortion should be aired on social media.

Answering pro-abortion critics who criticized him for a slow rollout of abortion services, which was deplored even by abortion-friendly doctors because of the lack of ultrasound machines and trained personnel, Harris asserted that the number of physicians who had registered to provide abortion had increased to 200. Harris said, “I have always said it was going to take time for these service to embed and evolve and become a part of the Irish health service.”