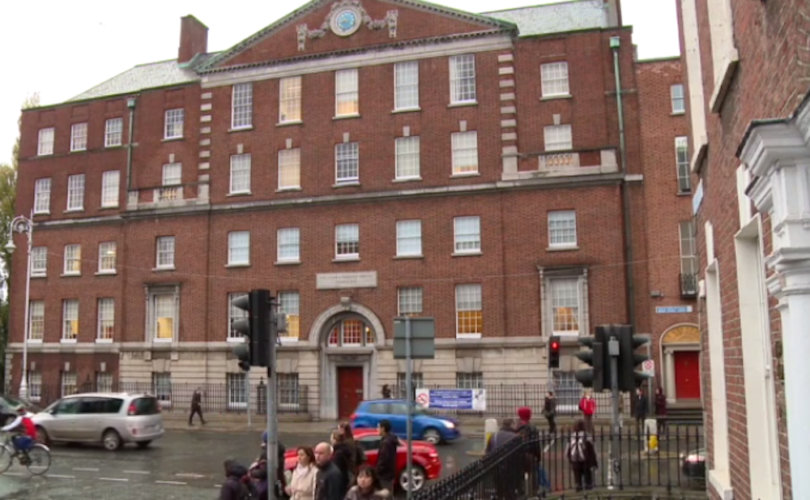 The existing National Maternity Hospital in Dublin, Ireland, will be replaced by a new facility on the St. Vincent University Hospital campus.

DUBLIN, Ireland, May 2, 2017 (LifeSiteNews) — A new maternity center to be built on the St. Vincent’s University Hospital campus and owned by Catholic nuns will do abortions to the extent these are permitted by Irish law.

James Menton, chair of St. Vincent’s Healthcare Group, asserted in an April 25 statement that suggestions the new National Maternity Hospital (NMH) would not provide all medical services allowed by law are “entirely false and without foundation.”

“In line with current policy and procedures at SVHG (St. Vincent’s Healthcare Group), any medical procedure which is in accordance with the laws of the Republic of Ireland will be carried out at the new hospital,” he stated.

Menton was responding to a controversy over a government plan to replace the NMH on Holles Street with a €300 million maternity hospital on Elm Street that is owned by the St. Vincent’s Healthcare Trust, which is owned in turn by the Religious Sisters of Charity.

NMH board member Dr. Peter Boylan claimed two weeks ago that the Sisters of Charity “might try to influence maternal healthcare at the hospital,” Niamh Uí Bhriain of Dublin’s Life Institute told LifeSiteNews.

His objections sparked such a media firestorm that at one point it looked as if Boylan had “almost completely derailed” plans for the new hospital, which, she says, is “urgently needed” because the current NMH is “ridiculously overcrowded.”

“What got Peter Boylan traction was the fact that the media here are very anti-Catholic and they’re so hysterical about abortion,” Uí Bhriain said.

“For them, this was a perfect storm of a story: a doctor opposing use of the Sisters’ land because of their view on abortion, and attacking Ireland’s abortion laws at the same time.”

But on April 26 the project board for the new NMH met and endorsed an agreement brokered by government-appointed mediator Keiran Mulvey after six months of negotiations.

It spells out that while the Sisters of Charity are sole owners of the NMH through SVHT, the maternity hospital will have full autonomy.

Any change to clinical practice will require unanimous approval by the board and the health minister, according to the Irish Independent.

Boylan resigned shortly after the board meeting.

Dr. Chris Fitzpatrick, chair of the project board, followed suit two days later in support of Boylan. He also cited concerns the Sisters might try to interfere with running the maternity hospital.

The controversy is really “about nothing because medical practice in Ireland in all of our maternity hospitals is not decided by a Catholic ethos, it is decided by evidence-based medicine and set in the parameters of the law,” Uí Bhriain told LifeSiteNews.

“Evidence-based medicine has shown that abortion does not benefit either mother or baby, and whoever owns the maternity hospital, abortion should not be part of modern medicine. It is a barbaric response to a crisis in pregnancy.”

But while Article 8 of Ireland’s Constitution protects the unborn child, the government liberalized the law in 2013 with the so-called Protection of Life During Pregnancy Act.

It permits a woman to have an abortion if two psychiatrists rule that her pregnancy is causing her to be suicidal.

“Abortion is not a treatment for suicidality and pregnancy,” Uí Bhriain pointed out, adding that the legislation “makes a mockery of good medical practice.”

It has also inevitably led to abortions in Ireland, with the Department of Health reporting last year 26 pre-natal deaths in the country, she told LifeSiteNews.

Of these, 23 were the unintended result of medical interventions to save the mother’s life, which has always been lawful in Ireland, and is not abortion, Uí Bhriain said.

Such cases would include cancerous uterus, ectopic pregnancy, or pre-eclampsia that requires the baby be delivered early.

But the “other three, very sadly, were actual abortions where the baby was killed because the woman said that she was suicidal,” she added.

The Irish Independent has also reported that St. Vincent’s University Hospital, which is a general hospital, has done abortions.

But such reports are suspect because the media routinely include as abortion those interventions to save the mother’s life in which the unborn child dies as an unintended consequence, pointed out Uí Bhriain.

It’s “extremely unlikely” that abortions were carried out at St. Vincent’s University Hospital, she said, but “we just don’t know because the figures aren't broken down by hospital.”

Now that the SVHC has stated the NMH would “carry out any medical practices that were legal,” Uí Bhriain said, it would be good to hear from the Sisters of Charity.

But Ireland's abortion law is in danger of becoming far more liberal.

Enda Kenny’s government will hold a referendum in the spring of 2018 on whether to repeal Article 8 of the Constitution.

“I think that we can win the vote if pro-life people stay the course and remain focussed on the goal of protecting both mother and baby,” Uí Bhriain told LifeSiteNews.

But they are up against a relentless pro-abortion lobby abetted by an anti-Catholic media, which have been pushing for this referendum for five years, she said.

The government has also set up the National Assembly, a process pro-life groups have criticized as blatantly favoring the pro-abortion position.

The 99-member Assembly voted April 23 and 24 that Ireland should legalize abortion, including for cases of genetic abnormalities.

David Quinn, columnist and founder of the Iona Institute, a Christian advocacy group, says the NMH situation is fraught for the Sisters of Charity.

The St. Vincent’s Healthcare Group “has already said that the new hospital will carry out any procedures lawful in the land,” he wrote in the Irish Independent.

Therefore, it follows that “if we liberalize our abortion law it will perform abortions on any grounds legally permitted, including the abortion of Down syndrome babies, one presumes.”

In that case, a maternity hospital the Sisters of Charity “own in a technical sense will be performing abortions for non-life-saving reasons on land owned by a Catholic congregation,” wrote Quinn. “So better they rid themselves of it completely.”

But according to mediator Mulvey, the Sisters can’t sell the land because it’s tied up in investments, the Irish Independent reported. Moreover, the agreement says the state will have a lien on the hospital.

Meanwhile, anti-Catholic feeling appears to be running high, with a petition calling on the Department of Health to “block Sisters of Charity as ‘sole owners’ of National Maternity Hospital” signed by 103,071 people to date.

It notes that the Sisters are one of the religious orders that ran the infamous Magdalene Laundries.

“Nobody is saying in any of this, whatever other mistakes the Sisters may have made, that they also provided excellent healthcare in this country,” Uí Bhriain observed, “very often to people who were desperately poor, at a time when the state failed to do so.”

Nor, she added, are people making the key point that “abortion is not healthcare, and should never be carried out in a maternity hospital or any other kind of hospital.”