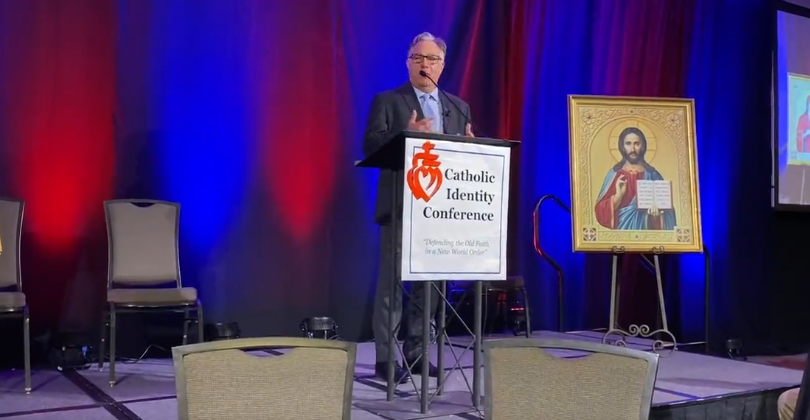 The Remnant's Michael Matt speaking at the 2022 Catholic Identity Conference in Pittsburgh, PALifeSiteNews

PITTSBURGH, Pennsylvania (LifeSiteNews) – Day one of The Remnant’s Catholic Identity Conference (CIC) is underway in Pittsburgh, Pennsylvania. This year’s theme is focused on resisting the effects of Pope Francis’ attack on the Traditional Latin Mass and his promotion of the “Great Reset” agenda.

Conference co-host Eric Frankovitch opened the day with harrowing remarks about the lengths that faithful Catholics must be willing to go in order to defend the traditional faith of the Church.

After laying out a severe description of the current state of the Church under Pope Francis, Frankovitch brought up the issue of the Society of Saint Pius X (SSPX) – controversial to some – and how the SSPX may be in a position to consecrate bishops again soon, perhaps without permission from Rome.

“No other bishop is going to ordain their priests,” he said, “so they have to have their own.”

Recalling Pope John Paul II’s 1988 declaration that Archbishop Marcel Lefebvre had incurred the penalty of excommunication for consecrating bishops without papal approval, and opining that a similar moment may soon come to pass, he said: “All I can say is please, please include me in that excommunication… I’ll stand with Saint Athanasius and Marcel Lefebvre.”

Ending his opening remarks, Frankovitch called the conference attendees to action and stated: “We need to resist the Francis and New World Order, together with God we will win this war.”

Changing pace, The Remnant editor-in-chief Michael Matt delivered a speech clearly aimed at rousing the patriotic and Catholic sentiments of the attendees.

“I don’t feel the doom and gloom,” Matt said.

He brought up the many Catholic churches burned to the ground in France and Canada and said: “They’re literally burning the Church to the ground.”

But he encouraged the crowd to take heart and remain hopeful.

“We will not lose the faith, we will not engage in unjust and immoral compromise,” charged Matt.

Those interested in viewing the conference but who could not attend can visit the conference website and purchase access to the full slate of talks and lectures.

On Saturday, John-Henry Westen will deliver a speech about Pope Francis and the Great Reset, and will also lead a press conference outlining “Statements of Resistance” against the “Vatican/Globalist Agenda.”

Stay tuned for LifeSite’s coverage of this year’s CIC.