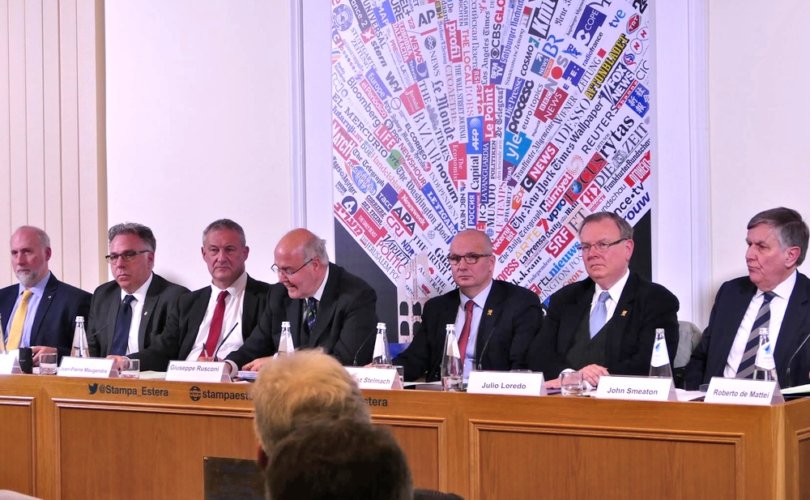 ROME, February 20, 2019 (LifeSiteNews) – An international group of lay Catholics held a public demonstration in Rome yesterday just outside the Vatican, demanding that Pope Francis and the world’s bishops address homosexuality during the upcoming abuse summit as the major cause of the sexual abuse crisis in the Catholic Church. A number of Catholic laity from prominent organizations made statements at a press conference during the event, outlining concerns they have about the abuse summit. Links to the full statements are included below.

“If this Synod limits itself to discussing only the problem of the abuse of minors, saying nothing about the plague of homosexuality which infests the Church, this Synod will betray its mission,” the International Coalition of Laity stated in a press release.

Pope Francis has called the presidents of all of the bishops’ conferences of the world together to discuss sexual abuse in the Church. The meeting will run February 21-24.

“The Synod will betray its mission if it does not address the profound causes of the crisis in the Church, which stem from the denial and abandonment of the absolute and universal moral law,” the group added.

The coalition gathered in Piazza San Silvestro where they waved banners, made speeches, recited the Rosary, and read from the Gospels as well as from St. Peter Damian’s Book of Gomorrah. About 100 people were present at the event.

There were representatives at the demonstration from various countries including Canada, United States, United Kingdom, Brazil, Poland, France, Slovakia, and others. Organizations at the event included The Remnant (USA), Renaissance Catholique (France), LifeSiteNews (Canada), The Society for the Protection of the Unborn Children (UK), Fondazione Lepanto (Italy), The Society for the Defense of Tradition, Family, and Property, and others.

“With this demonstration we want to express – by means of silence, prayer, the reading of holy books, and our ‘standing attentively’– the voice of the faithful,” the Coalition stated.

“Faithful because we are simple lay people, subject to the authority of the Church, but also because we want to profess and defend the Catholic faith, which today is sadly being betrayed by those same authorities who ought to be defending it,” the group added.

Michael Matt: Blaming Catholic abuse crisis on 'clericalism' is, in fact, an act of clericalism

Scott Schittl: Only the truth can be pastoral: Why Catholic leaders must speak about dangers of homosexuality

Julio Loredo: The remedy for clerical sex abuse is prayer and good formation – not ending celibacy